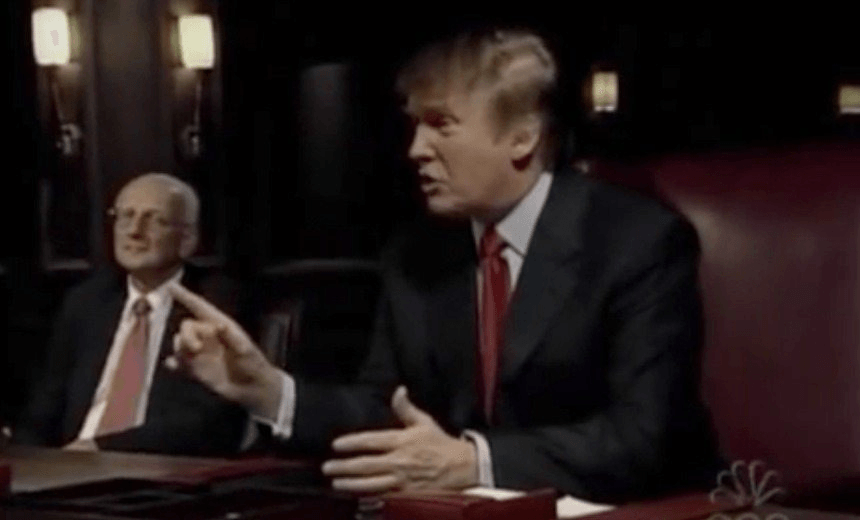 Whilst NBC is frantically burying old tapes of The Apprentice, Pete Douglas holds his nose and dives into the YouTube sewer to find some more stellar examples of Donald Trump being terrible.

About 10 years ago I visited Trump Tower in New York. This was during the early popularity of The Apprentice and it seemed like a novel way to spend a bit of time. As I drank my bad coffee and marvelled at my tacky, gaudy, gold-encrusted surroundings, I realised that I really didn’t much like anything about Donald J. Trump.  He seemed like a strange, horrible, loud-mouthed man, and his taste in headquarters did very little to dispel that initial impression.

Over the weekend, Trump has holed himself up in that same Trump Tower, as his misguided campaign to become the 45th president of the United States of America morphed into a runaway train which, upon coming to a dead end bridge, flew off at full speed. It seems that surely now all that is left is for the wreckage to finally explode in a tangled mess at the bottom of the valley below.

Many senior Republican figures have denounced Trump and pulled their support in light of the awful allegations – and audio proof – surrounding him. The “Grand Old Party” seems to be having a collective bout of rueful head-shaking, as they reflect solemnly on how this revoltingly grotesque, stubby-fingered, ferret-scalped, hyper-sexed, roving-handed, vulgarian Oompa Loompa has hijacked their political party.

If only they had the foresight to check out some old episodes of The Apprentice, a reality show which Trump starred in and co-produced for over a decade. Having assembled aspiring CEOs from around the country to compete to become his next hire, it’s only 10 minutes into the first ever episode before Trump says “women have a harder time in the boardroom… or so they say”.

There may be horrors surfacing on secret behind-the-scenes tapes, but revisiting the show it’s pretty clear that The Apprentice was a place where Donald was more than happy to show off his misogyny, racism and general buffoonery in front of the camera as well as (allegedly) behind it.

Here are some great reference points to start your descent into Trump Apprentice hell:

Exhibit A: His Books

Before we even get to the show itself, let’s not forget Donald basically outlines his thoughts about the woman competing on The Apprentice in his imaginatively titled contribution to the literary world How to Get Rich.

Exhibit B: The Good Wife

It was terribly shocking for everyone – from the Governator to Trump’s own running mate – to suddenly realise what kind of man Trump was, but accusations about his behaviour were hiding in plain sight on The Apprentice from way back.

We’ve heard a lot about the Rosie/Trump feud over the past couple of weeks, but this original spewing of hatred from Trump on Entertainment Tonight sure is something, especially given he’s there under the auspices of promoting The Apprentice.

Star Jones was one of the contestants on The Celebrity Apprentice, who underwent a gastric bypass operation before appearing on the show. During a boardroom chat, Donald noted that her ass is “much nicer now that she’s lost all the weight”.

Click here for the full video, where even Donald Jr. seems taken aback by the comment (and that’s saying something).

Keisha Knight Pulliam played Rudy in The Cosby Show back in the 80s, and in the last season of The Celebrity Apprentice she was basically fired for refusing to call the alleged rapist Bill Cosby and ask for a generous donation to charity.

During The Celebrity Apprentice season three, Trump stopped the boardroom conversation in its tracks after washed-up rocker Bret Michaels used the expression “she got down on her knees and begged to do this” to describe his team-mate Brande Roderick’s desire to take on a team task.

Trump, being Trump, just couldn’t resist. “Must be a pretty picture you dropping to your knees” quips Trump, much to the amusement of fellow class act Piers Morgan while Roderick probably vomits a little in her mouth.