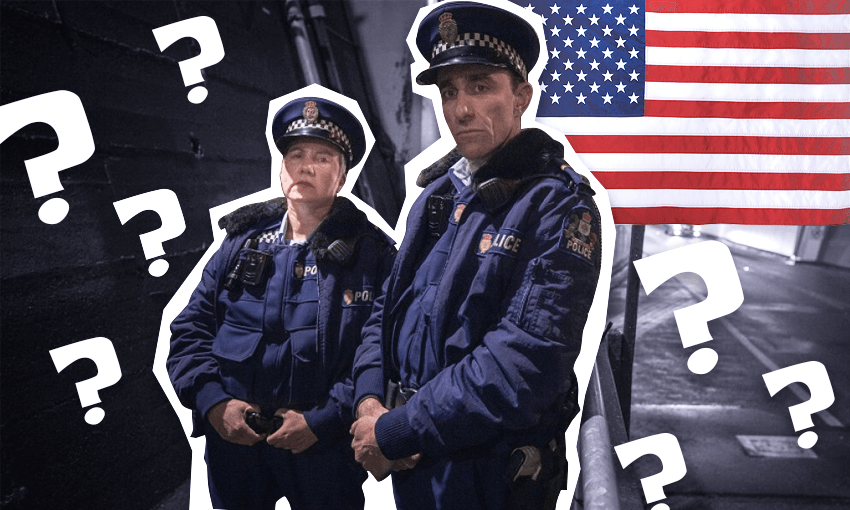 America is freaking out about Wellington Paranormal

One tells viewers to turn on subtitles. Another makes the bold assertion the Kiwi TV show could reverse decades of US police brutality. A third suggests Marmite might have somehow been involved in its creation. Just one day after its US debut, it’s fair to say Americans are freaking out about Wellington Paranormal.

“It’s been absolutely insane,” says Mike Minogue, one of the show’s leads who, alongside co-star Karen O’Leary and showrunner Jemaine Clement, spent yesterday reading coverage while live-tweeting the show’s US premiere. “We get stuff sent through and it’s (from the) New York Times, Rolling Stone. It’s absolutely phenomenal the coverage it’s been getting.”

But do they get it? In season one of Wellington Paranormal, Minogue and his partner, Karen O’Leary, investigate a cow stuck in a tree. In season two, a taniwha devours their sidekick, Constable Parker. Later on, the pair, who specialise in solving paranormal cases, meet a ghost from the 1930s while policing horn tooting in Mt Victoria Tunnel.

In short, Wellington Paranormal is about as Aotearoa as a TV show can get. Meat goes missing through a vortex at a backyard summer barbecue. Cuba Mall’s bucket fountain makes regular appearances. A 1980s Nissan 300ZX is haunted by the ghost of a boy racer. Local reality show Police Ten/7 is clearly a huge influence.

In America, two episodes are airing a week on the CW Network and streaming via HBO Max. Could the show’s hyper-localised humour – which sprung from the comedy minds of Clement and his regular collaborator Taika Waititi and, specifically, from their 2014 vampire mockumentary What We Do in the Shadows – get lost in translation?

Yes, says Minogue, the actor who has played his namesake, Constable Mike Minogue, for three seasons, a Christmas special and a series of Covid-19 advertisements. “It’s pretty out of it,” he says. “Some of the stuff they’re just going to be wondering, ‘What the fuck’s going on?'”

Some US critics already think exactly that. With Waititi and Clement’s names attached to the show, big name publications have been reviewing Wellington Paranormal, perhaps expecting something a little closer in tone to What We Do in the Shadows, the US-set spinoff series.

“I saw that one,” says Minogue when I call to ask him about it. Turning on subtitles seems extreme, but he suggests it might be a good idea. “There’s probably some truth in that,” he says. “I was watching the first episode today. Some of this stuff is going to be pretty tough (for) the American viewer.”

But Minogue cautions that subtitles might not go far enough. “You can put it into subtitles, but I still don’t know if people will know what we’re talking about … the local phrases and things. They’re going to need to be able to go to a New Zealand-specific thesaurus to get the definitions.”

Many critics have been complimentary. “Brilliant,” says The Guardian. “Our favourite comedy of the summer,” says Gizmodo. The Gazette calls it “unique, bold and flat out funny”. “It’s the kind of comedy that demands your full attention, because the best jokes often involve things happening in the background,” says Rolling Stone.

Some have been a little ruder. “Wellington Paranormal’s loose relationship with reality ends up lending the project a certain airlessness,” quipped Variety. “It’s silly, fun and occasionally astute, even when it isn’t trying,” wrote The Wrap. “The waggish, winking zaniness of Wellington Paranormal allows it to transcend its outdated elements,” says Slant Magazine.

Others, however, have been flat out weird. “It mostly looks cheap enough that it might have been bankrolled entirely in Marmite,” suggests The Hollywood Reporter. Huh? “That doesn’t even make sense as a sentence,” laughs Minogue. “Do they mean, ‘Was it funded by billions of dollars by Marmite?’ No.”

Amidst all of the coverage, there’s one review that stands out above all the others. It’s from Polygon. In it, reviewer Samantha Nelson suggests Wellington Paranormal could be “reverse copaganda” – meaning Minogue and O’Leary’s hapless cops could help reduce the effects of decades of police racism and brutality in the US.

“It certainly helps that the New Zealand police officers are much less threatening than their US equivalents,” argues Nelson. “They’re only armed with tasers, which they turn on each other far more than they hit anyone else. But beyond the Keystone Cops-style gags, the show’s writers relentlessly mock the effectiveness of policing.”

I had to ask Minogue: could two bumbling Kiwi paranormal investigators who started out with bit parts in a 2014 vampire mockumentary single-handedly change the image of policing in America? Are Mike Minogue and Karen O’Leary US police saviors?

Erm, no. “I don’t think any of us have that kind of power,” he says. “That would be an amazing feat (but) I don’t think a sitcom from New Zealand is the thing that saves the day. I think it’s going to take more than that (to undo) a sustained couple of centuries of work.”

There’s a pause, and Minogue has another think about it. “We’ll see though,” he says, as deadpan as his TV cop character who’s just witnessed a ghost. “You never know.”

Jemaine Clement: How we wrote the Conchords’ ‘Bowie’s in Space’