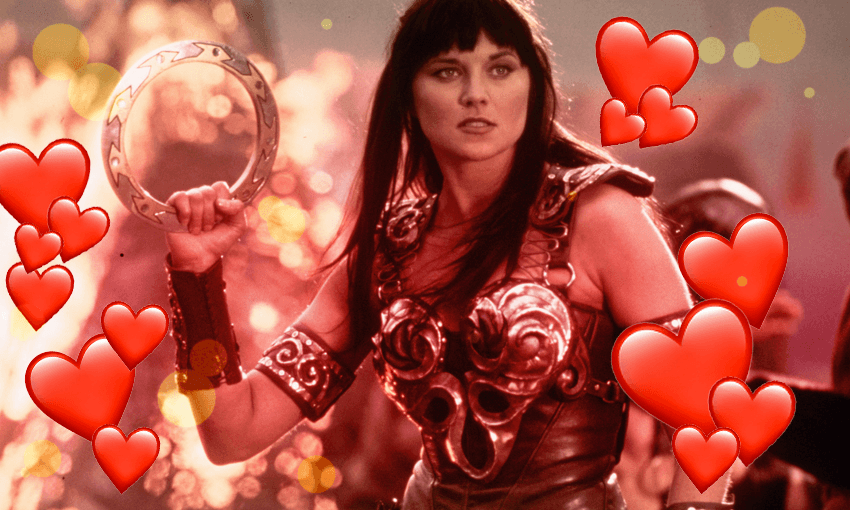 It’s Valentine’s Day, so why not pay homage to the New Zealand icon herself, Xena: Warrior Princess (the first three seasons drop on Lightbox tomorrow). Sam Rutledge writes a love letter to the woman herself.

Question: was anyone who was alive in the 90s in New Zealand ever NOT watching Xena? I was only born in the 90s so I was honestly too young to “get it” until the last couple of seasons, but when I did you can bet my ass was trying to watch as much of it as I could before my parents eventually came downstairs to find out why I was being so quiet.

Xena, the show, was a campy, cheesy hit, and it’d be no surprise if Xena, the warrior princess, had been a campy, cheesy lead who we all forgot about when the series ended. But something about Xena was different. She sunk her teeth in, and held.

For me, Xena is the first memory I have of seeing a woman on TV who defied stereotypes. Granted I was very into regular princesses and The Saddle Club at the time, but when I was a kid I wasn’t lucky enough to have the same spectrum of women you can find now.

Xena was exciting because she wasn’t lithe and artfully flecked with dirt, she was burly and loud and looked like she got proper sweaty in her leathers. She got mad and she was allowed to show off and show remorse and show her strength. I loved girls that got dirty and roughed up because that was what I liked doing. Xena rode a horse and I also did that! I fell off a lot and got covered in mud and cried and got back up and flew across big green paddocks and that meant that probably I was Xena.

I also definitely had a crush on her, but I didn’t pick up on that at the time. Bit preoccupied with the utterly rampant similarities between us at that point, me. If I had known how to work my parents’ fax machine and understood addresses I would have sent one to the Xena creators and thanked them very much for the nice TV lady that I loved probably at least once a week.

Luckily these days I can just put all my thoughts down on the internet for anyone to see, which is much faster and has saved me from ever having to figure out how to use a fax machine.

My favourite anecdote of pretty much all time is telling people I used to live down the road from Xena. Whenever I drive through Orakei I point out the house she used to live in (in my heart I’m sure she still owns it but even with a thorough google I can’t confirm) and tell whoever I’m with that my nana found out through her old lady grapevine that that’s where Lucy Lawless lived! That’s the entire anecdote and it gives me a lot of joy. I’ll be pulling that one out when I have my own old lady grapevine (“Xena! The warrior princess!” I’ll tell my six nightly glasses of wine, and oh will we laugh).

Because obviously you have to remember, Xena happened before we were on the map film-wise. She came before Lord of the Rings and The Hobbit and Top of the Lake, so having Xena as your neighbour was a hell of a story. You can bet that I spent a lot of time going to the nearby New World and just hoping I might run into her, in full costume, maybe riding a horse.

But the best part of Xena is that she is still to this day a top tier gay icon among internet lesbians. You can keep your Frodo and Sam nonsense, Xena and Gabrielle are the superior travelling queers. Boys can come and go but the gal pal you take everywhere with you and touch all the time for no reason is forever!

I know there was a lot of fuss about whether the subtext between Xena and Gabrielle was ever going to become regular text. It was unfortunate that the credits weren’t allowed to have the two actresses in the same shot in case unsuspecting viewers who saw them thought they were watching one of those lesbian TV programmes (which were… in abundance in 1995?), especially because they didn’t bother removing any of the lesbian content from the actual show.

But I think we’re all adults here and we can agree to disagree about erroneous details like Xena being in love or lust with boys, because there’s no denying that the show did care deeply about its main relationship. Even now, with the widest TV landscape imaginable, a buddy show with two female leads who are each other’s most important compass point are rare as hell. Like do you know what the present day equivalent of Xena and Gabrielle is? It’s Rizzoli and Isles.

It’s hard to pinpoint exactly what it is that makes Xena such a powerful and enduring figure not only to me but to pop culture in general. But I believe it has something to do with her never having been “just for girls”. I hesitate to call her masculine because we too often conflate masculine with good, and there was no time watching the show that I felt Xena ever embodied traits that are inherently masculine anyway. Unless you’re a person who thinks fighting is only for boys (in which case, you clearly never had sisters).

She was a warrior for all genders, and a princess for all genders too, and the fact that she could do both, as well as everything in between, makes her longevity almost inevitable.

It’s easy to put her on a pedestal because it’s been so long, but I feel like Xena deserves it because she’s the Dana Scully of mythological olden times – she is the archetype for those who have come after her. She’s also special because she’s ours. It didn’t matter that the show was technically American, we all knew that it’s brilliant to have an original homegrown one from our own veggie garden. I love our big ol’ carrot princess!

Cheers, Xena, for being the toughest, queerest, cheesiest warrior heartthrob we could ever ask for. I love you!

You can watch seasons 1-3 of Xena: Warrior Princess on Lightbox from February 15 on Lightbox right here.