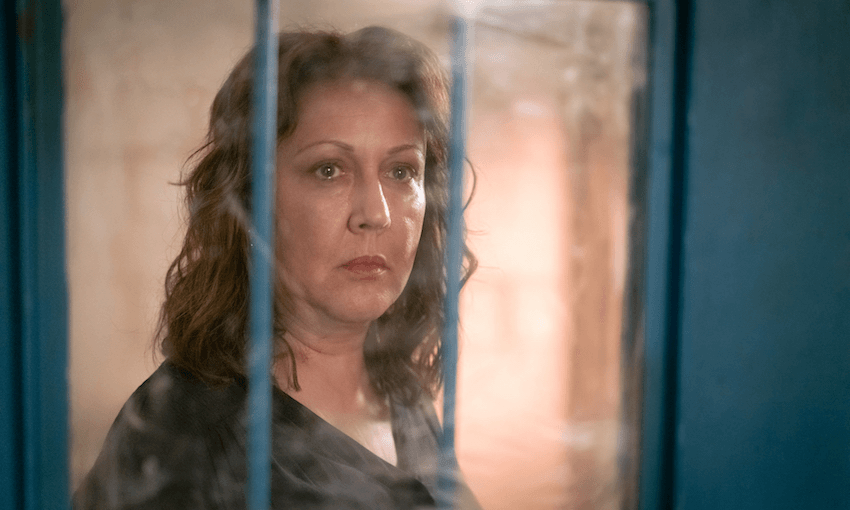 Review: The Tender Trap is a warning against finding love in strange places

Ten years on from the incident that landed Sharon Armstrong in an Argentinian prison, The Tender Trap tells the story of her romance scam.

In April of 2011, Sharon Armstrong’s story was under scrutiny from thousands of New Zealanders. With her mugshots plastered all over the news here and abroad, the 53-year-old found overnight infamy after being arrested in an Argentinian airport on charges of trying to smuggle 5kg of cocaine in her luggage to London.

In a time when online disinformation has never been more of an issue, The Tender Trap makes for somewhat uncomfortable viewing. Rima Te Wiata’s portrayal of Armstrong’s descent from a loving, present nana and whānau member into a distanced, lonely woman falling for an online scam feels disturbingly familiar.

Whether it draws parallels with a relative’s descent into conspiracy theories or just brings up memories of small-scale scams on Fair Go, the theme of preying on vulnerability is one most viewers will have some relationship with.

Comments on a news article from the time follow a harsh through-line – all the way from “do the crime, do the time” to “how could she be so stupid?” Armstrong admitted in a 2018 interview on The Hui that it took her months to come to terms with the fact that her online boyfriend “Frank” wasn’t who he said he was. In fact, she later found out he may have been a whole team of people.

The Tender Trap uses a shift in colour grade to jump between Armstrong in prison in Argentina after she was found with the drugs, and the events four months earlier when she first signed up for the dating site where she would meet Frank. Green hue aside, Te Wiata’s portrayal makes it clear the Armstrong who started the dating profile as a bit of a laugh with her cousin was not the same as the one who got arrested just months later.

In the four months they chatted, Frank sent over 7,000 messages to Armstrong, who in the film becomes completely attached to her phone and email, waiting for the next reply to ping through.

She had never seen or met Frank, and only talked to him over the phone or through messages before he asked her to come and meet him in London. The journey there had one overnight stop (which quickly turned into days) in Buenos Aires, where Armstrong’s suitcase was changed and the drugs put into her possession.

In the film, Armstrong is conned into believing she’s transporting a file of confidential building blueprints to Frank; in reality the documents were contracts for a job in London. She never checked the bag, nervous that if she did, Frank would know she didn’t trust him.

As internet scams go, this particular story seems relatively far-fetched, and it’s easy to imagine becoming suspicious of it far earlier than Armstrong was. That’s part of the reason she was so vilified by the public at the time.

An ex-public servant working as the deputy chief executive of the Māori Language Commission, Armstrong certainly didn’t fit with people’s perceptions of who was likely to fall for a scam like this. In her 2018 book Organised Deception: My Story, she described the whakamā she felt in the time following her arrest, but says she has now come to terms with that shame.

Te Wiata gives a convincing performance of a woman who, through her loneliness, is conned into falling in love. It’s a heartbreaking story which, thankfully for Armstrong, had a far better outcome than it could have done.

Now, Armstrong is a director at the Society of Citizens Against Relationship Scams (Scars), an organisation that helps victims and their families understand the signs of a relationship scam before it’s too late.

According to Netsafe, New Zealanders lost over $4.1m to romance scammers alone in 2019, and this is only the loss that has been reported. In reality, the sum is probably far higher. Luckily, resources like Netsafe, Scars and CertNZ exist to help people understand the warning signs, and how to deal with them.

Watch The Tender Trap on TVNZ 1 at 8.30pm tonight and TVNZ OnDemand.