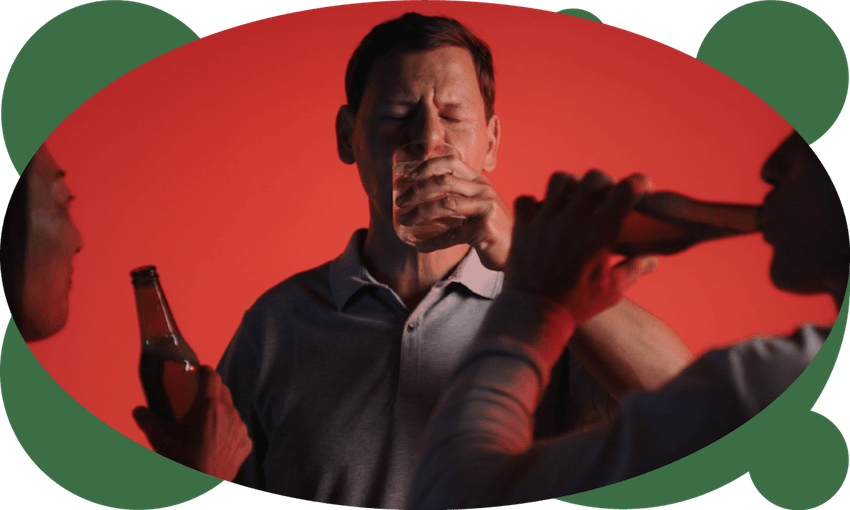 Newshub’s national correspondent drunkenly stumbles around his old flat and into the sober dawn.

Paddy Gower has carved out a niche as being up for anything. He hams it up on The Project. He smoked weed on the telly in aid of his special, Patrick Gower: On Weed. He did a shithouse TikTok dance at the Vaxathon. He seems to have an insatiable enthusiasm for whatever it is he decides to champion on any given day and his down-with-the-bros, everyman quality would be obnoxious if it weren’t so believable. It shouldn’t come as a surprise to anyone that Paddy Gower has always been up for a drink.

I have to confess I wasn’t super excited about the prospect of reviewing his new special, Patrick Gower: On Booze. As a societal ill, alcohol consumption possesses all the hallmarks of a big gnarly problem and I am always a bit sceptical of the inevitable reductionism that occurs when issues like this are boiled down to a 45-minute television special. The alcohol industry is worth billions of dollars and comes equipped with potent lobbying prowess. Like a vine, drinking is so tightly coiled around our concept of socialising, it’s hard to know where to begin pruning it back. The reasons we drink are varied but often involve deep-rooted insecurities, hurts and anxieties. Alcohol causes harm to many but is especially damaging for those who already live with disadvantage.

I just wasn’t sure I needed to watch a well-to-do white man stumble upon his own revelations in this particular form. I know why I was asked to review it: last year I wrote a reflection on my own drinking prompted by Guyon Espiner’s booze documentary, Proof. It was hard not to start watching Gower’s offering by wondering what the hell was up with a generation of political editors in this country.

Gower starts the special by heading to a 21st birthday on Crate Day, our national celebration of binge drinking. He skulls from a brown swappa crate bottle and yarns with the youth about when they think people start drinking in this country. So far, so Paddy. He is Paddy G and he is up for anything.

My jaded cognitive bias comes a cropper when Gower starts talking to psychologist Grant Foster about his first drink. He chronicles what he thinks is normal: heavy binge drinking. There are weekday drinks, Friday drinks and weekend drinks. Foster tells him he may not quite have a physical dependence on alcohol but he definitely has a psychological one. It’s here that you start to understand the collision between the up-for-anything, likeable television personality and his heavy drinking. It’s here that masculine identity starts to get unpacked.

As he chats further to Foster he reveals early insecurities and a shyness that’s not unfamiliar to those of us who have spent a long time believing our real personalities are only unlocked after a few drinks. Talking to Claire Robbie, founder of No Beers? Who Cares!, he says he grew up thinking people thought he was ugly. Not going to lie, I had a bit of a cry at this point. A few tears for the young Patrick Gower and a few for me, a woman who spent years drunk-boxing with her own insecurities about the way she looked.

Structurally, the special is kind of a dance of the seven veils, as it leans into Gower’s own personal revelations about his drinking and away from being a fact-finding mission on alcohol and the health and social harm it causes. There’s a lot packed in. Perhaps that reflects the original set-up, which looked as if it might have been closer to the P special format – a more objective look at alcohol – but it’s better for the subjective detour it takes. It’s still too rare to see men attempting to deconstruct elements of toxic masculinity and I would happily have watched more of that and less of the industry statistics.

The special lobs in a trip to Alcoholics Anonymous, check-ups with health professionals and a ride-along with the cops. The AA trip works, nudging Gower along as he battles with not wanting to drink any more while simultaneously not wanting to give it up. The cop ride-along and scenes from Courtenay Place give some broader context to the social harms alcohol causes, but they’re a bit too fleeting to compete with what’s become a very personal story.

Early on, Gower “gets off his tits” and stumbles round a flat he used to live in in Wellington. He chats with two young women who seem visibly awkward and slightly uncomfortable as Gower nicks a beer out of their fridge. Filming is stopped for the day. He watches the footage later. There’s a couple of great layers to this. The obvious is the facilitated-by-television access he gets to his drunk self. I would rather die than watch any footage of me drunk. Claire Robbie observes the change in his face. “Like a demon,” she says. More subtle, is that among the youth, often the recipients of Gower’s “Paddy G” pitch, he presents as a kind of lost boy. He’s a pissed Peter Pan, reluctant to let go of the liquid port key that has served him so well as social lubricant and a fountain of eternal youth.

We learn later on that his bender happened after talking to his mate and former TVNZ political editor Corin Dann, who tells him people were worried about his drinking when they were both in the press gallery, but nobody talked to him about it. Gower is thrown by this. This is his shame writ large. This shame is the unhelpful preventative that stops most of us talking to each other about our drinking. That the revelation comes in an exchange between two men who stalked the halls of power, protected from confronting the issue by professional callings that endorsed a work hard, play hard ethos, adds a more powerful cultural commentary than the underweight cop ride-along scene.

The conversation between Dann and Gower ultimately dislodges any of my scepticism about this special. A frustrated Gower hollers “How, how, how, how, how” at Dann after a suggestion that he try moderating his drinking. For a man who’s made a career out of synthesising ideas and information for television audiences, he is utterly stumped when it comes to ingesting the information required to make a change.

Gower’s great gift to the necessary discourse in this instance is that he is so relatable. And that he is a man. Men are twice as likely than women to be hazardous drinkers and his conversation with Dann does double duty as an example of how it’s actually possible to talk about this issue with trusted friends and perhaps even more importantly, that these kinds of conversations, whether they be about alcohol or the insecurities that plague us, can happen between two men.

Gower chats with Dann’s wife, Lotta, a well-known proponent of sober life. Gower once again, child-like, grapples with how he wants to stop drinking but doesn’t want to give it up. “I can’t,” he says. “You can,” replies Lotta. She explains that when you’ve had a long drinking career, you don’t ever really form a close relationship with yourself. “This is your one life,” she says. “Don’t you want to know who you are?”

And that’s this special in a nutshell. It’s Paddy on booze but really it’s Paddy on Paddy. I often get sick of “we need to have a conversation” as a substitute to dealing with issues that actually require concrete solutions. But in this instance and on this subject, we’re still lost boys trying to find the right words. Paddy Gower’s exploration of his own drinking and what’s driven it are a welcome contribution to a vocabulary that needs to expand.

As a follow up, Three will air Newshub talks: Booze tonight at 8:30pm. This will likely give some airtime to the broader social harms of alcohol that got downweighted as the nature of the special changed to accommodate Gower’s personal story. It’s a panel discussion that includes Gower, Corin & Lotta Dann, Brodie Kane, Michelle Dickinson (aka Nano Girl), Matt Chisholm, Kieran Read and 42 below founder Geoff Ross.