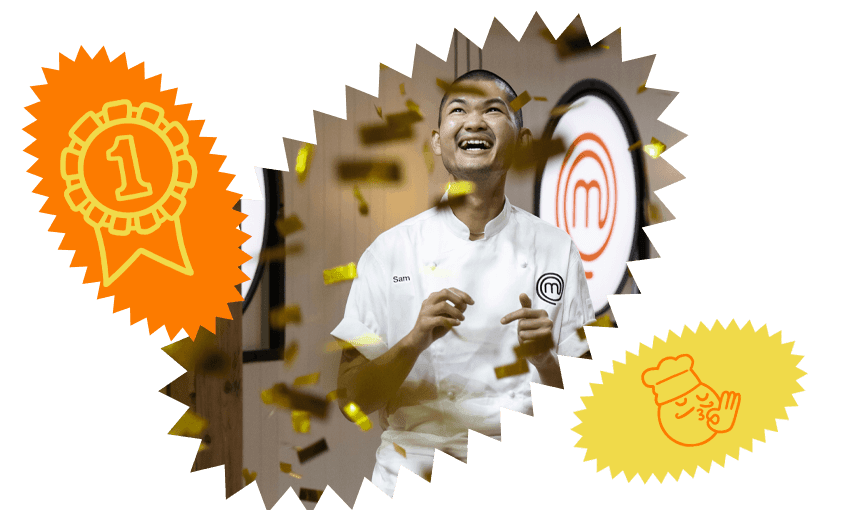 Tara Ward speaks to the Masterchef NZ champion about his coming-of-age on the show and the power of food as a love language.

After seven weeks and several intense challenges, last night Sam Low was crowned New Zealand’s new Masterchef. The grand final saw content creator Low and gin-maker Elliot McClymont compete to impress the judges with their ideal restaurant menu, showcasing their skills and talent in an epic three-course pressure test that went down to the final dish.

In a close contest, Sam’s intriguing sea-themed dessert earned him victory, with the “weirdly wonderful” kombu ice cream receiving perfect scores from judges Nadia Lim, Vaughan Mabee and Michael Dearth. Lim called it the best dish she’d had all competition. Sam’s modern fusion of Chinese and New Zealand cuisine saw him proudly put his culture and heritage on a plate, with the judges praising his innovation, detail and technique.

Sam celebrated last night’s grand final with a potluck dinner for 20, cooking his winning pāua congee for a community of close friends. After keeping the win secret for several months, Sam says finally being able to talk about it is a weight off his shoulders – “it’s like being closeted, and then it’s like my coming out again”. Over Zoom this morning, Sam told us all about his Masterchef NZ journey, going “balls to the wall” in the final and the power of blue cod.

The Spinoff: Tell me about the experience of cooking in the grand final, which looked intense. What was going through your mind?

Sam Low: That was basically pure adrenaline. I didn’t know what was going on. The video in the beginning [a good luck message from their families] made us cry. I don’t know that it helped, it just made it more emotional. I think it was a dream challenge for both of us. We were able to express our food without any limitations and just cook from our hearts.

I think our restaurant ideas really encapsulated that. How can I use my food memories and apply what’s assimilated around me with ingredients and my upbringing and my travel experience into something that’s new and still resembles who I am? I think I did that with all three of my courses. The third course was basically me going balls to the wall and just going crazy. I just made a sea inspired dessert, which is kind of wild.

Was there nerves or doubts about what you were making? Putting seaweed in meringue is kind of out there.

I think the nerves and worries have been there for every single cook and every single competition. But at the end, it was literally like fight or flight. I channeled this weird state of mind where everything went blurry and the sound went muted, and all I could see was just me and blue cod. That’s kind of why when you see the judges come around on screen, I’m just like real brief with my answers.

How did you find the whole reality TV process? You seemed to stay calm while you cooked, despite the pressures of the cameras and the judges, which I imagine is hard to do.

It was definitely weird in the beginning, but I think you get used to it. It looks so clean and minimal on screen, but there’s like, seven people around you. I think cooking on TikTok and Instagram really helps with that. The more camera exposure you’re doing, the more you are comfortable with just being true to who you are, regardless of what you see yourself as. I think that really helped me in this competition, and also my coffee competition background too. It’s like a combination of those two things has led me towards this thing.

What made you want to go on Masterchef NZ?

From a young age, I wanted to compete. I’ve always had this love for hospitality competitions, and early on in high school, my catering hospitality teacher would encourage me to do these types of competitions. It was funny, because Elliot did the same thing as well, and at one point, we probably would have been in the same competition.

As I traveled and came back and wanted to come out to my parents and live my truest self, I was like, this is the perfect opportunity for me to be the role model that I wish I had when I was younger. So I walked into the competition with my own agenda. Winning was never the end result, the end result was always, how do I portray what I stand for and inspire others? And that just so happened to win the competition.

You talk in the show about using food as a form of expression, which seems really empowering. Can you tell me about that?

Food was definitely the thing that I would always turn to, at the lowest point in my life or the highest. I don’t speak very fluent Chinese or Cantonese with my parents, so a lot of the times we talk to each other is through the expression of food and using food as a love language. I’ve adapted that from a very young age and how I express it with my friends and the community that have helped me be proud of who I am, whether it be my cultural heritage or my sexuality.

I’ve always used food to kind of bring them into my world and my life and my history. I think that was really, really powerful. In a way, I’ve always kind of neglected that side of my life. Now it’s like this secret weapon that I have. It just makes life more interesting.

And it felt like this season Masterchef NZ really showcased a rich and diverse New Zealand food landscape, too.

It’s so important, especially now, where we celebrate kai Māori and Matariki and genuine diversity. It’s not just different people from different cultures, but also different lived experiences and different levels of privilege. The fact that I wasn’t the only queer person of colour on the show, means that it’s no longer just, you know, tick the box. It was more genuine, and I feel like this is New Zealand and we have this giant landscape of multitudes of different cultures.

Both contestant Alice and judge Vaughan said that Masterchef NZ had changed them, and I wondered how the experience has affected you.

It feels like it’s my coming of age. It’s weird to do that on national television, on a reality TV show, but it’s true. Two years ago, I wouldn’t be this proud, I wouldn’t be this confident, I wouldn’t be able to talk to so many people. Going through this journey, I’m hoping that it’s like, a younger version of me doesn’t have to go through that. That’s ultimately it, and as selfish as it sounds, I did this for younger me and that in itself could potentially inspire a larger community of people.

Where to now? What do you hope will come from your Masterchef NZ win?

First thing first is to work on this cookbook. You know, I’ve never wanted to just cook for people, I’ve always wanted to inspire others to cook for themselves. I’ve done that through helping people understand food and ingredients and culture, but also through TikTok and Instagram, inspiring people to cook accessible, easy, interesting, and good food.

This interview has been edited for length. Masterchef NZ is available on ThreeNow.