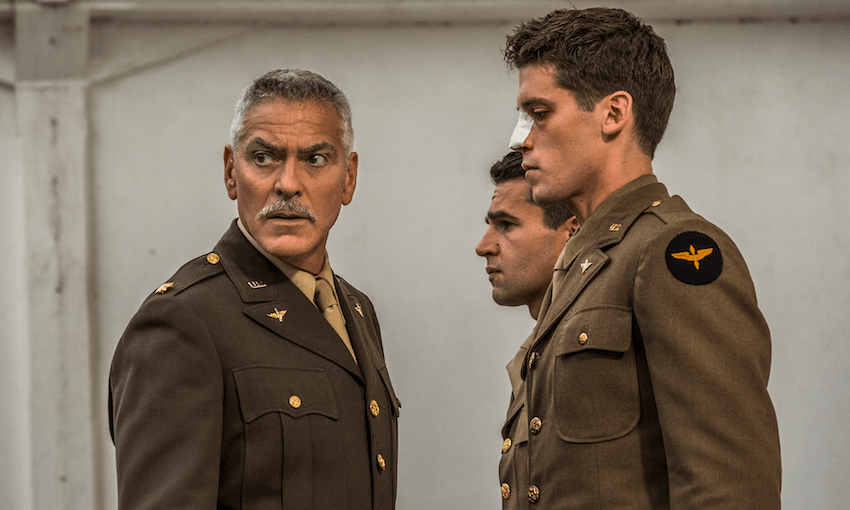 George Clooney’s Catch-22 can be streamed in its entirety on TVNZ on Demand.

Review: Catch-22 meanders off-course on its journey from book to miniseries

George Clooney’s Catch-22 can be streamed in its entirety on TVNZ on Demand.

Even if you are not familiar with Joseph Heller’s 1961 satirical novel, you will be familiar with its title — a catch-22 at its most technical is a paradoxical problem with no solution because its rules inherently void the possibility of a solution, though the term has gone on to more broadly represent a situation where one cannot escape or “win”. Catch-22’s eponymous crisis revolves around young Captain John “Yo-Yo” Yossarian (Christopher Abbot, from Girls), who is serving as a bombardier stationed on an island off the coast of Italy in World War 2. As part of his draft he must serve a number of missions and becomes heavily distressed by the trauma of this service, but every time he is close to fulfilling his duty the amount of bombardier missions he must serve is increased.

While he tries to scheme how to get out of his service by means of mental instability, a doctor informs him of the military’s catch-22 clause that throws a wrench in the works: to be dismissed from missions he must be proven clinically insane, but to request dismissal on the grounds of fear of trauma during said missions automatically proves your sanity as you are able to clearly acknowledge that you fear clear and obvious danger, as any sane person would do. This particular mini-series adaptation is helmed by George Clooney’s Smoke House Pictures production company, with the Nespresso Silver Fox also directing and co-starring – with Kyle Chandler (the dad from Friday Night Lights) and Hugh Laurie (you know who Hugh Laurie is) providing support.

Before I get going, I feel it is important to note that I have never read Catch-22. It never came up in any of my English classes in high school. I stopped reading “classic literature” written by men and recommended by men in high school, after I borrowed Catcher in the Rye, a book about a man that does not bother to appease anyone other than other men, from the library and hated it more than any other book I have ever read.

None of this is to say Catch-22 is a bad book; I’m sure it’s worth something for it to be so revered. I just don’t see myself reading about men and war, even if it functions as a satire of those two things, because I don’t think it’s made for me to consume. I think an adaptation should be able to function as a separate entity from its source material, and I don’t think this series meets that goal.

I am very glad I decided to research and ask around about Heller’s 1961 novel before I wrote this, because otherwise I would have said something like, “Hey, why is everyone being so rosy about war?” My Spark Notes-intensive research has lead me to understand this is part of a purposeful structure to deliver delayed punch-lines — which I have mentally compared to Arrested Development — and that the novel ends with a true depiction of the horrors of war.

I also understand that America loves a bloody war, and loves to send people off to die in them and glorify those who do; I just don’t know if I have any faith in this miniseries shirking that national narrative of patriotic bloodshed within a tight six episodes that has already used an excessive amount of screen-time for what is essentially endless montages of lads.

Also, every single woman in Catch-22 is naked – except for a nurse who wore clothes and said three lines. The strongest female representation in Catch-22 is my name watermarked on the advance screener I got from Paramount, which I cannot stress enough was a very exciting part of reviewing this. Every time the screen was black, there was my name right in the middle, and it made me think “Wow, I can’t believe I made my own series on Hulu!” It also made me think, “I can’t believe I didn’t put more women in my series on Hulu!”

It feels like the screenwriters struggled to adapt a book known for its quick and sardonic writing to screen; the dialogue is very fast and leaves no space for comedic timing, and conversation becomes monotonous. The barking circular logic of Yo-Yo’s officers and fellow soldiers loses its wit and irony when it’s not punctuated written words telling the reader when to pause. On screen, the dialogue descends into militia minutiae that’s lost on a viewer who lacks familiarity with war jargon. Timing is so important to comedy, especially when the humour needs a beat for you to let it hit you. Instead, in Catch-22, would-be funny lines get lost in a blur of angry men.

I reckon if you saw Catch-22 with George Clooney in the at-home cinema that he definitely has, he would be watching you watch it the whole time and saying, “Haha, did you see what I did there?” every five minutes. I think this miniseries will eventually be a great DVD box set gift for your father, step-dad, uncle, or any other miscellaneous older gentleman in your life.

Perhaps the need to be faithful to a source material that requires such distinct translation to work is Catch-22’s own catch-22: is it possible to successfully adapt a novel to film that relies so heavily on the experience of reading it?

You can stream the entire series of Catch-22 on TVNZ OnDemand now.