Australian sketch comedy group Aunty Donna finally got a Netflix series. Have they sold out to Big American Comedy? No, says Josie Adams.


I shook Mark Bonanno’s hand while he was flyering in Edinburgh. I stood next to Zachary Ruane in line for the movies in Melbourne. I ricoheted off Broden “Manbeast” Kelly when I bumped into him on Queen St in Auckland. I have touched Aunty Donna, and they have touched me.

Now they’re touching the whole world. The boys and their team – director Max Miller, writer/director Sam Lingham, and composer Tom Armstrong – have had a slightly-more-than-cult (ie not just me) following for almost a decade. Thousands of us across the Antipodes have frothed the Donna lads, and wished them nothing but the best. Their new Netflix show is a manifestation of our collective dreams.

Aunty Donna’s Big Ol’ House of Fun been out for a week now and mostly, the world is loving it. I could find only one negative Google review, which said: “This is terrible, not funny, lame, terrible, horrible, terrible, childish and so terrible!!! Only good thing that happened was the ‘everything’s a drum’ bit at the start.”

In my opinion as a professional reviewer, this review is terrible and horrible, because the “everything’s a drum” sketch is definitely the worst part of the show.

The best thing about Aunty Donna’s Big Ol’ House of Fun is that even though it has an American budget and American stars, it’s still completely Australian. A sketch where Zach and Broden put on horrible South African accents is the kind of content the Commonwealth craves. Zach might have the best fake New Zealand accent ever recorded on film. The barbershop sketch will especially tickle anyone who’s met any man from Melbourne. 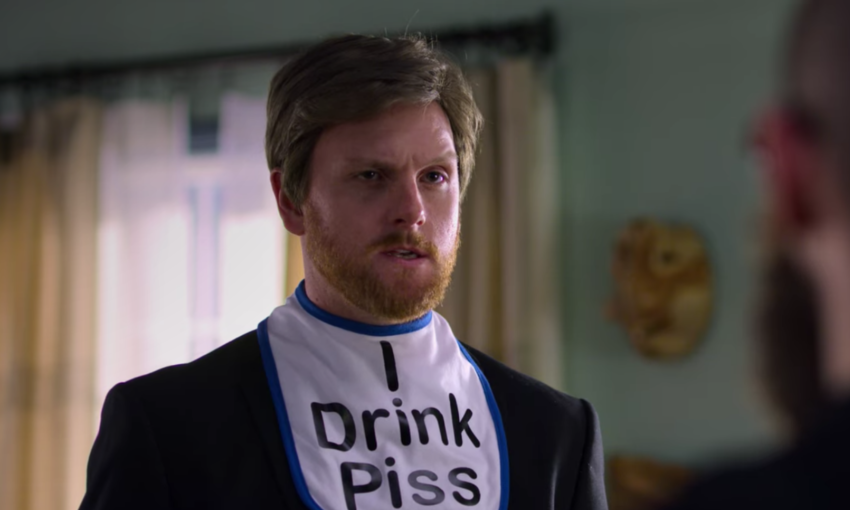 There’s plenty of new material for new fans: a sports doping tester who drinks piss, a tiny man who lives in a plug socket and is hellbent on killing Zach, and Jerry Seinfeld. But for old fans, the classics are still here: Janiel and Danuary are back, Cowdoy is back, and so is frequent collaborator Michelle Brasier.

The Ellen Degeneres sketch is also back, and it remains one of the top five funniest pieces of comedy I have ever experienced. For years I would play the sketch over bluetooth speakers at every house party. I don’t get invited to house parties these days. Sidenote: you used to be able to pay Zach to DJ at parties but now the only service he offers is free soloing. The Ellen sketch has been updated slightly for a wider audience: instead of three Nissan Pulsars, Ellen (played by Broden) gives away three Toyota Corollas.

New characters are brought to life with a long list of celebrity cameos: Kristen Schaal plays an irate dishwasher, Awesome Kong is herself, Paul F Tompkins plays two human jukeboxes, Weird Al Yankovich is a vampire, and The Boys’ Jack Quaid and Antony Starr join our own boys in separate sketches: Quaid is an old-timey basketball referee and Starr gets to use his New Zealand accent in a sketch where he plays a “stray man” Mark’s brought home.

Tawny Newsome, who you might recognise from Space Force, has one of the funniest turns of the series as the Queen of England. It could be an anti-colonial, anti-monarchical statement, but it’s also just really hilarious. “I’m the fucking Queen of… Angland,” she slurs, as a Grenadier guard steals the boys’ spoons. “I’ve been watching this show The Crown, that shit’s lit.”

Playing himself is executive producer Ed Helms, proper comedy celebrity, and the man who helped bring Aunty Donna to Netflix. He begs the boys to stop doing vox pops and reveals his real name (“Egg”).

Helms and the boys break the fourth wall often, and always with a sense of horror. In one scene, Mark stops and stares at a studio audience we’d never seen or heard. When one sketch goes on too long, Broden asks “are you going to cut?” Helms himself stops the lads mid-way through a sketch, telling them they’re off the rails.

Aunty Donna is absurdist comedy, but it’s also about the absurdity of comedy. The central thesis of the show seems to be: “Why would you watch this?” At every turn, they challenge us to stop. When Broden sculls piss, when Mark drags out a mime of a full hook-up sesh silently and disgustingly, when Zach kills a man and is sucked into a trans-dimensional portal in a scene that’s audio-only; it’s either disgusting or impossible to understand.

The music is the same. Sometimes musical comedy can come across like the artist isn’t very good at either music or comedy. But Aunty Donna uses music to make content less meaningful, not more so. The entire soundtrack is composed by Tom Armstrong, who makes certified bangers only. It’s not your Bo Burnham or Tim Minchin style of cultural critique dressed in rhymes and piano.

It’s house music about fucking. The end credits song hasn’t been released yet, and I spend every night going to the group’s Soundcloud in the hope it has appeared.

The sketches, the music, and the cast members are all totally cooked lads, and so are Aunty Donna’s fans. “Watch this show every day with my morning brown,” said one Google reviewer. “Australian Monty Python on meth,” said another.

Aunty Donna is on Netflix now.