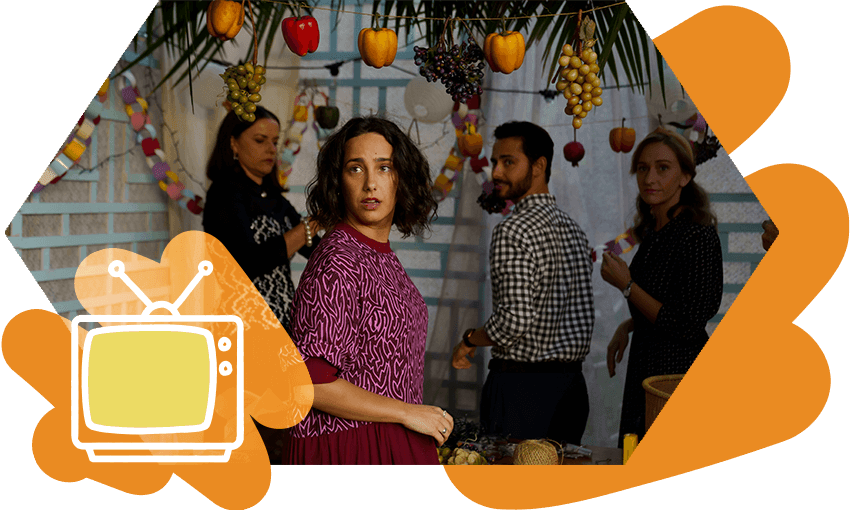 The ambitious new comedy from writer-actor-executive producer Simone Nathan is the kind of TV we should be making more of in New Zealand, writes Sam Brooks.

You don’t often see the same name under both “written and created by” and “executive producer” in the credits of New Zealand TV shows. This sort of auteur approach isn’t uncommon overseas – think Donald Glover’s Atlanta or Michaela Coel’s I May Destroy You – but here? It doesn’t happen a lot.

Simone Nathan is the creator, executive producer and star of new TVNZ OnDemand comedy Kid Sister, and she acquits herself more than capably in all three roles. The series follows Lulu (yup, Nathan), an Auckland woman with close ties to her Jewish family, as she tries to navigate her way through the wants and needs of those around her while also managing her own millennial ennui.

This show is doing a lot. Most obviously, it’s trying to tackle the inner headspace of Lulu, who seems to exclusively make choices guaranteed to make other people’s lives harder. Beyond that, it’s also a look at the Jewish-New Zealand community, and the cultural pressures and dynamics that exist within it. Impressively, it manages to blend these two subject matters and show us a woman whose obligations, both cultural and personal, are piling up at the gates, with the hinges about to come off. That’s a lot for a show to cover. But even though Kid Sister goes more broad than it goes deep, it manages to cover the territory that Nathan has laid out without feeling too scattered.

The most apt comparison for Kid Sister is a hit show that casts a long shadow: Fleabag. After Phoebe Waller-Bridge took the Edinburgh Fringe Festival by storm with her solo show, it was adapted by the BBC, and took the world at large by storm with its second season, scooping up BAFTAs and Emmys. It was a triumph of form, effortlessly taking the kind of unlikeable character that network executives think we don’t want to see and vivisecting her for our pleasure, discomfort and empathy. As blueprints go, you could do worse.

Kid Sister fits the Fleabag mould in a few ways. Firstly, it was written by its star. Secondly, it achieves, surprisingly well, the same tricky tone as that show. It needs us to sympathise with Lulu when she does things that would make any reasonable person end or at least question a relationship with her, but we also need to laugh at her. Thirdly, it surrounds the protagonist with a cast of characters just as flawed as she is, with the volume turned up just a little bit. We can love to hate them, but we have to hate to love Lulu.

It’s a reminder that New Zealand doesn’t make enough of these kinds of personality-driven TV projects, shows that revolve around a singular highly watchable character. Our last big one was Golden Boy, which started off strong and stumbled when its focus widened beyond Mitch to the wacky antics of the other inhabitants of his small town.

Internationally, there was a huge trend for this kind of show in the back half of the last decade, but it seems to have receded in recent years. It’s a depressingly unsurprising fact that our TV industry is only getting around to experimenting with this genre now, long after the rest of the world identified that yes, audiences may respond more to a show built around a single compelling personality (say, I May Destroy You) than various underwritten characters shuffled around a single compelling concept (say, a lot of shows).

All that’s to say, Kid Sister is doing something that counts for ambitious in New Zealand TV, and it feels unfair to ding it for aiming for a 10 out of 10 and only hitting a seven. There are, however, a few missteps that prevent the show from reaching the heights that it might have otherwise.

Simone Nathan’s performance as Lulu is a curious one. It would be fair to assume she’s aware of her range and abilities as a performer, and she writes ably to those, nailing Lulu’s quiet, panicked moments of indecision. Compared to the other performances, though, Nathan too easily fades into the background. That’s especially clear when put against an excellent Amanda Billing as Lulu’s mother Keren, wielding a South African accent like a machete, and even some of the smaller, more vividly performed roles, like Morgana O’Reilly, who knows about loud ensembles, who plays a harried mother in one episode.

It’s worth remembering that by the time Fleabag got to our screens, Phoebe Waller-Bridge had had a few years perfecting that role onstage. By the time we saw it, she wore it like a second skin. Nathan, on the other hand, feels like she’s wearing a slightly ill-fitting suit of her own design. Her laidback energy isn’t enough to hold scenes, and she lacks the vocal dexterity to nail her own millennial speak; lines like “you look so cool, I wanna kill myself” need a very specific serve to get them across the net. It’s not a bad performance by any stretch, but in a show as ostensibly personality-driven as this one, she ends up ceding the spotlight entirely to her ensemble when she should at least be sharing it.

The series also has a curious reliance on voiceover. Every boring screenwriting manual will tell you that voiceover is to be used as a last resort, but I disagree – look at Enlightened, which used Laura Dern’s warm tones to expose her character’s delusional, chilling investment in wellness culture, or more recently in Physical, where Rose Byrne’s character Sheila’s sadomasochistic internal monologue is a core part of her nervy performance.

Kid Sister, on the other hand, uses voice-over to flesh out what we’ve already heard and seen through both Lulu’s dialogue and body language– and the effect is double-percussive. It’s especially frustrating given that the moments when the focus is held on  Lulu’s reactions is when Nathan truly shines as a performer. We see enough of Lulu’s inner dialogue played out on her face. We don’t need to hear it too.

For all those misgivings, there’s no doubt that we could do with more shows like Kid Sister. There are enough personalities, enough storytellers with tales to tell in this country, and do so in their own voices, messy and all. Nathan’s one of many, and Kid Sister fills out the tapestry of New Zealand television in a way that excites me – where else are we going to see the story of a Jewish-New Zealand family told at all, let alone as interestingly as this? Perfection is great, and Fleabag was pretty much that. If we can’t have another Fleabag, I’ll happily take a Kid Sister.

All episodes of Kid Sister are available to watch now on TVNZ on Demand. Four episodes were watched for review.