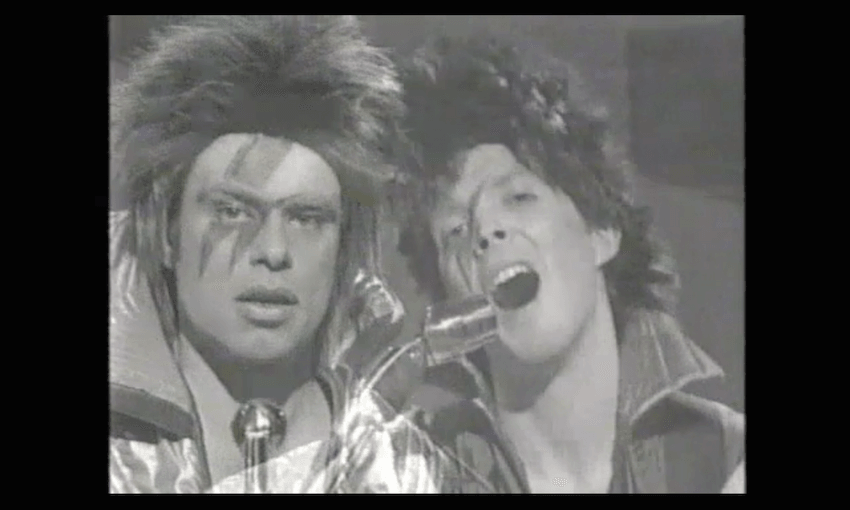 A shot from the unaired, rejected TVNZ pilot from Flight of the Conchords.

How we found the lost Flight of the Conchords tapes

A shot from the unaired, rejected TVNZ pilot from Flight of the Conchords.

It’s the rejection that fuelled a comedy legend: the failed TVNZ pilot from Bret McKenzie and Jemaine Clement. Paul Horan writes about his hunt for the footage for the NZ comedy documentary Funny As.

There have always been people in my line of business that are desperate for credibility. After their years of fretting, lobbying and rebranding, the tax department now calls me a media and performance professional. But I think working in comedy, a deeply unprofessional profession, you have be a bit proud of your shonky lineage and the dodgy showbiz people who used often dubious means to make unlikely (and occasionally marvellous) things happen.

I stay in touch with this lineage by staying superstitious. Performance people are prone to stupid beliefs and rituals and I am proudly one of them. I have a friend who makes a ceremony of buying a new pair of shoes when he starts a TV show and throws them out on the last day. Then there are theatre makers that always hand out a copy of Conrad’s Heart of Darkness at the initial rehearsal. “Here’s a peek into the pitch-black maw of human evil. Now let’s warm up those vocal chords!”

But when I began work on a documentary series about New Zealand comedy, I thought I needed something particular. Usually I put something on my phone and read it on the way to work every day. My little private ceremony before a day of other people’s problems. This time I settled on Hart Crane’s poem “My Grandmother’s Love Letters”. It’s got this great cautionary line that goes round in my head: “Over the greatness of such space / Steps must be gentle”.

I needed this sort of deft footwork when we started to track down one of our comedy’s great unicorns. A VHS cassette that barely no one had seen but everyone had opinions of. The tape was the TV pilot episode that Flight of the Conchords made in 2004. It was during that year they were becoming noticed internationally – they had recorded a series for BBC radio and had a development offer from the UK’s Channel Four.

This was unparalleled for a New Zealand comedy act at the time. The Conchords could barely believe it themselves, so they took up TVNZ’s offer to develop a pilot thinking that overseas success seemed a bit improbable and the idea of being able to do something in Wellington was pretty cool.

So, they made a seven-minute teaser based on the comedy premise that their band had been part of every major phase in NZ music since the early 60s and this was them recalling their tumultuous past. They set about cutting themselves into real footage of the Howard Morrison Quartet in 1963 and as a glam rock band appearing on the NZBC talent quest show Studio One in the 70s. TVNZ turned it down on the basis it was too expensive and not really what they wanted for a mainstream slot. The Conchords were disappointed, but within the year they would record their One Night Stand special for HBO in the US. This would announce them as one of the most innovative comedy acts of the new millennium.

The success of the Conchords inspired the local comedy industry. To most it is a source of pride (and to a few, jealousy) but the pilot became mythologised, even weaponised. Comedians repeated this story, saying “TVNZ let them slip through their fingers!”, “They didn’t recognise how good they are! So they won’t be able to see how good I am!”

Then, after it was repeated in media a few times it became an article of faith.

So, when I started telling people I was looking for the pilot, everyone had an opinion. Over 15 years, the story had become even more fraught. “TVNZ has destroyed it and they probably won’t even let you talk about it,” said one industry figure. “The Conchords are so angry they won’t let you near it,” said a similarly respected figure. I nodded as they clutched their pearls. This is where gentle steps were needed.

What they claimed as fact I knew was probably crap but, when the truth is this hazy, these ideas can become genuine barriers to finding it. Similarly, a lot of people who told me that John Clarke (who created our greatest comedy character Fred Dagg) didn’t come to New Zealand much because he was scared of flying. He wasn’t a fan of air travel, but it was never paralysing. It was more a factor in saying no to the thousands of things he was asked to do here. The facts, as often happens, had an ordinary complexity rather than a shrill show biz simplicity.

I thought I would ask the Conchords themselves first and then figure how to get the tape later. So over five months, four schedule changes and negotiations right down to the day, the affable but extraordinarily busy Bret and Jemaine sat down at Bats Theatre in Wellington in May this year. We talked on camera for nearly three hours, then towards the end I ventured, “let’s talk about the pilot …”

Whether it was the benefit of hindsight or age – this volcanic anger they were meant to have – never materialised. Not getting the TVNZ series had transformed them and enabled them to focus on overseas and for that they are eternally grateful. So there you go, done and dusted. I casually asked if we could show the pilot.

The response? Yeah sure. Don’t know where it is. Try Paul Yates, the producer of the pilot?

When I related this to Paul, an old friend, on the phone, he was surprised but immediately swelled with pride. “It was really quite good!” But like so many conversations that I had during this project it ended with someone trailing off and saying, “What a shame it never…”

Then I asked, “Do you know where it is?”

The master was nowhere to be seen, but Paul said he would have a look in his garage when he got back from holidays.

As deadlines started to loom, this became the last piece missing from the doco. After steadily cajoling Paul, also incredibly busy helming the second series of Wellington Paranormal, he waded into his garage in the Hutt Valley and found what was probably the last existing copy.

After digitisation, couriers going to the wrong place and several delays, it finally arrived at my office on pretty much the last day of our deadline. Our tired team, who had viewed hundreds of hours of comedy, all shuffled into the edit suite to watch it.

I don’t shriek with glee as much as I would like to in my life. But on this rainy Tuesday, we all did. It was hilarious; a peek at an amazing act just coming into themselves. We looked at it knowing that the supposed drama and the raging agendas that had been lumped on it amounted to nothing.

That day, we were able to look at it for what it was – just a joyous piece of fun. So, I will write in the margins of Hart Crane’s poem, right next to the “gentle steps” bit, a note on ignoring showbiz gossip and that the truth often lies in a garage in the Hutt Valley. Not very subtle, but I am a history guy not a poetry guy.

You can watch all episodes of Funny As on TVNZ on Demand.