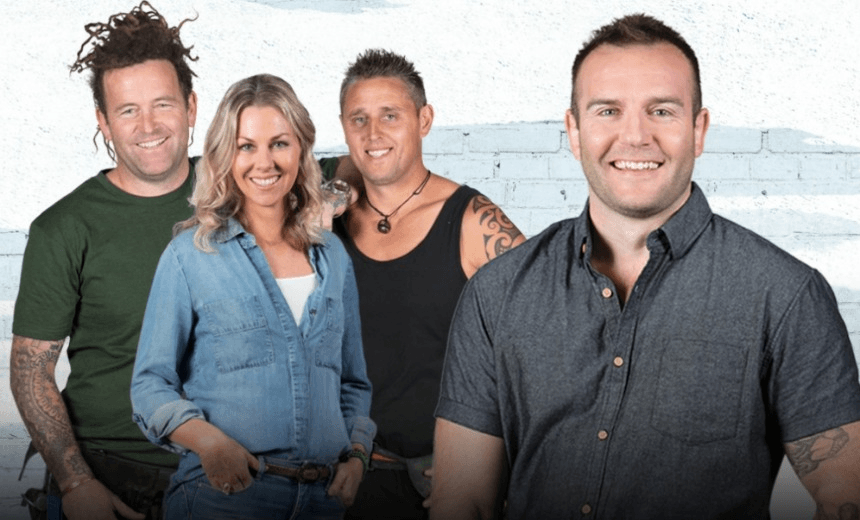 HOMEmade is a throwback to the golden days of tradie telly

New Zealand’s search for a bona fide celebrity builder to carry the torch lit by Cocksy may finally be over with the arrival of TVNZ 1’s no nonsense new home reno show.

It all seems so long ago now, but there once was a time when the only home renovations on New Zealand television were undertaken by trusted professionals. My House My Castle’s John ‘Cocksy’ Cocks, Changing Rooms’ ‘Handy’ Andy Dye – they were the kind of handymen who knew their building codes back to front, who could do you a raised vege patch in the time it took you to make them a cup of tea. It was a privilege to watch them go about their work, wrangling gib board and building new decks every week.

In recent times we have become burdened by a scourge of unskilled amateurs with dollar signs in their eyes, who bumble around for hour after hour on competitive reality franchises like The Block NZ and Our First Home. The closest thing New Zealand has to a celebrity tradie these days is Logan Dodds, the handsome plumber who makes loads of money filming travel videos on a GoPro. It is a sorry state of affairs we find ourselves in.

There are, however, signs that the tradie tide may be rolling back in. One arrived last Wednesday night in the form of TVNZ 1’s new series HOMEmade. Upcycled from the sturdy lifestyle programming bones of Kiwi Living, HOMEmade is a throwback to the good old days of home renovation shows, with a straightforward premise and an honest to god real-life qualified builder among its cast of presenters.

HOMEmade’s hammer and nails man Dion South is as good as we’ve seen on local television for the best part of a decade. He wore a classic black singlet throughout the first episode, and worked like an absolute dog to get the renos finished on time. “I reckon I’ve lost five kilos today,” he told the show’s interior designer Melissa Greenough, after she forced him to install a whole new kitchen in a day. This is the kind of dedication you want to see from your TV handyman.

The beneficiaries of the new kitchen were the Hughes family, first home buyers from Stanmore Bay who were desperate for some home improvements but didn’t have the budget. The show’s formula saw the HOMEmade crew turn up and turf them out for the weekend while they did up two different areas of their home. Just like the golden renovation formats of old, the family were kept in the dark as to what was going on until the ‘big reveal’ at the end.

“They are happy for us to do anything and or everything,” host-slash-project manager Goran Paladin assured the crew in the car to Stanmore Bay. They quickly identified the family’s kitchen and deck as the two areas they could make the biggest impact (and place the most sponsors’ products) and got to work. Dion had ripped out half the old kitchen before the family had even reached the Hibiscus Coast Highway, while landscape designer Dan Mackey got stuck into a pile of garden rubbish, salvaging materials for a deck extension.

Everyone got their hands dirty; even the ostensible host ended up caked in mud after mucking in on the landscaping. In the time it would take The Block contestants to build a scarecrow out of toilet paper, HOMEmade covered all the reality reno bases: DIY tips from unpretentious landscape and interior designers, a qualified builder slogging his guts out to get the job done on time and a heartwarming reveal when the family returned at the end. Just like the good old days.