Chris Schulz chats to Jaquie Brown about how she kept her composure for the most hectic 12 minutes of live television ever filmed in New Zealand.

Jaquie Brown is in full flight. It’s after lunch on a sunny Monday, and I’ve only just sat down. Sipping on green tea, her eyes are wide, and she’s already talking faster than I can keep up.

“He started punching the (piano) keys really, really hard,” says Brown, spinning her arm in a helicopter motion. “His left arm becomes a free-form rotor blade. He’s swinging it around then landing it, punching with great force … They were not pretend punches. They were really big punches.”

Brown’s getting really animated now: “He goes up another level. He stands up. He stops punching the keys and he starts punching himself.” She pounds her fist into her chest. “He’s punching his chest, beating his chest, then he moves out from behind the piano and onto the floor. I’m like, ‘Oh god – what’s happening?'”

Brown has spent a full five minutes describing the craziest interview from many she conducted over the course of her career hosting music TV in the 2000s. It’s not over yet.

“He’s out of control. He’s like a performance piece on speed, swinging, hitting himself, jumping up in the air and breathing really heavily, making these animal noises,” she says. “I’d never seen anything like it.”

Finally, Brown pauses. I have so many questions I don’t know where to begin. It’s nearly 20 years since her live late-night interview with erratic rock star Andrew WK stopped me in my tracks. It aired in 2002 on Space, Brown’s buzzy music show that she hosted with Dominic Bowden, then Hugh Sundae, for several seasons. I remember walking into the lounge of my rented Pt Chevalier flat at the time, standing there, transfixed.

Available only on YouTube, the clip remains as chaotic, frenetic, concerning and perplexing as it did when it first aired.

So many things happen during those 12 minutes. When the interview begins, Andrew WK climbs under a piano and refuses to come out. He takes to a copy of the NZ Herald, shredding it in seconds. He attempts to cram his calf into a space that it clearly doesn’t fit, nearly breaking his leg. He grunts, moans, blows raspberries, and rages about yoghurt. He declares: “Me being alive is a miracle.”

Then, as Brown describes so brilliantly above, things get really crazy.

Where does it rate in the annals of infamous New Zealand TV interviews? In my mind, it tops the lot. Dennis Conner didn’t climb under an America’s Cup boat to escape the wrath of Paul Holmes in 1989. Helen Clark didn’t destroy a newspaper when John Campbell ripped into her over Corngate in 2002. Jami-Lee Ross didn’t break his own finger and stumble into the set backdrop when Tova O’Brien eviscerated him after last year’s election, but he probably should have.

Brown’s Andrew WK interview remains a masterclass in staying cool in chaotic situations. It’s so good it should be studied in broadcasting 101 seminars. Looking back on a 20-year career that’s seen plenty of memorable moments, including jetlagged rapper Xzibit throwing her out of his limousine and Jackass star Steve-O showing her his penis, she says it’s the one that means the most to her too.

Yet Brown’s never been asked about it. After the interview aired, she didn’t hear about it again. It didn’t make headlines the following day. No one mentioned it as anything special. It hasn’t come up over the years.

She’s surprised when I email her, asking if she remembers it. “This was a time when Facebook hadn’t been invented,” she says. “I had no online presence. We had no knowledge of the impact we had. It was totally silent.” 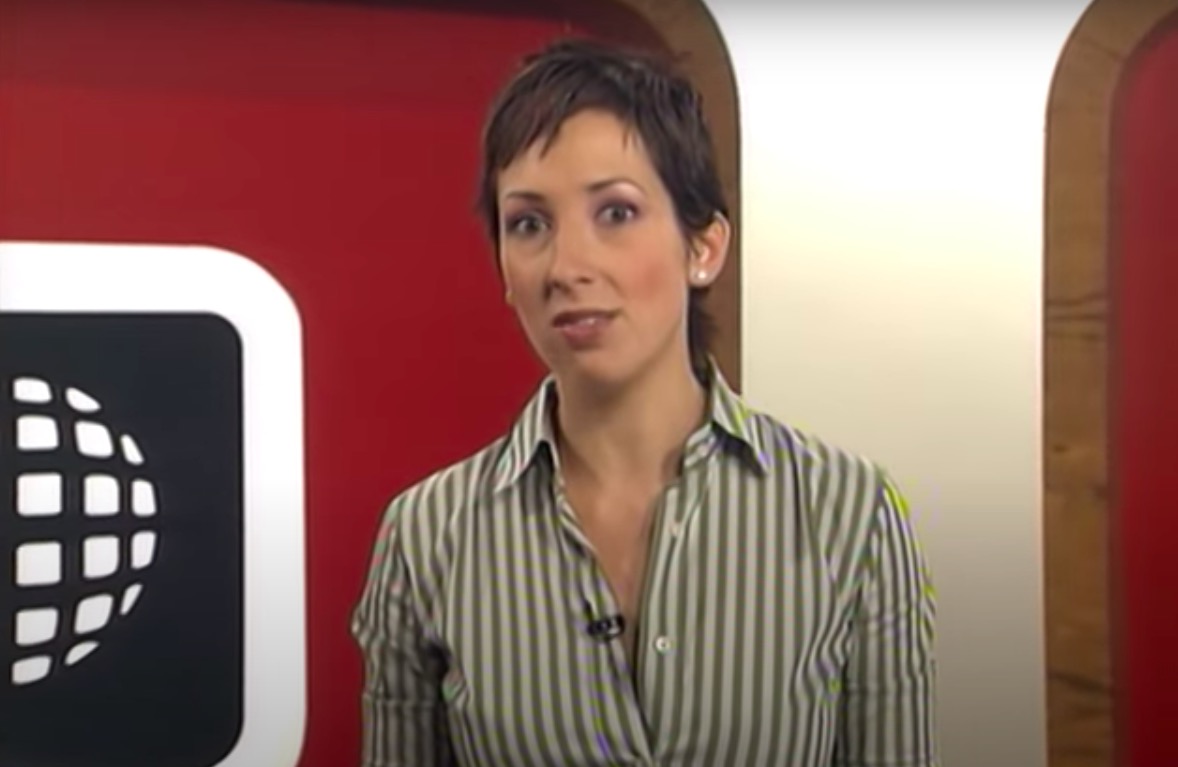 Jaquie Brown wasn’t even supposed to be on television. It was pure chance. In 2001, she’d moved from bFM to become programme director at George FM when she was interviewed for a TV show. Producers liked what they saw and asked her to audition as host for a music show they were making.

“I didn’t think that I was good looking or had anything to offer TV at all,” says Brown. “I didn’t even want to audition. I’m so weird looking. I’ve got short hair, I never wear dresses. Why would they want me on TV?” She remembers filming ad-lib interviews on the street, making fun of men’s shoes, for the audition. “Somehow I won them over.”

Space, which aired for 90 minutes every Friday night, threw Brown “into the deep end”. She suddenly found herself interviewing a who’s-who of the early 2000s music scene. Many major local and international musicians stopped by to chat and perform. John Mayer showed up. Rap group Tha Liks performed. Kiwi bands Shihad, Fur Patrol, Goodshirt and Rubicon were regulars.

They all played the fame game. “Everybody … had been beautifully well-behaved, trained musicians who knew the role that they would play,” says Brown. “It would be, ‘You’re being interviewed, we give questions, you give answers, you play a song, we go home.’ It was a symbiotic relationship. You scratch my back, I’ll scratch yours.”

Then Andrew WK showed up. The Michigan rock star was in New Zealand as part of a promo tour behind I Get Wet, his debut album that delivered Meatloaf-inspired meta-anthems about rocking out. The album’s first single and biggest song was called ‘Party Hard’. It was the song Andrew WK was supposed to play on Space instead of beating himself up.

Leading up to his performance, there were few signs things were about to head south. The show’s producers had a white piano delivered to the set to match Andrew WK’s aesthetic. “We would have paid to have that piano shipped in and tuned,” says Space producer Hayley Cunningham. “We didn’t know too much about him. We thought he looked like a good time.”

Rehearsals stuck to the script. “He said, ‘We’ll do the interview on the couch,'” says Brown. He practised ‘Party Hard’, and nailed it. “The rehearsal was completely normal. When we went to go live, it was, ‘Three, two, one’ … down he goes. All I remember thinking is, ‘Fuck, oh my god, this is completely different to what I thought was going to happen.'”

Brown drew on her experience from wayward bFM interviews to coax Andrew WK back from the edge. “I got down on my hands and knees and approached him,” she says. “I tried my best to interview him but he wasn’t open to being interviewed. He was on an Andrew WK performance path … he didn’t play by the rules.”

When the interview was over, Brown persuaded him to perform. He began by pounding the keys relentlessly, finally squeezing in the opening bars of ‘Party Hard’. He managed to yell out the first few lines before making a mistake – a catalyst for what would come next. “It’s like something in his mind goes, ‘You know what? Fuck this. Fuck it hard,'” says Brown.

In the control room, Cunningham had an ad break readied in case the performance got any worse. “We would have said, ‘Stand by – who knows what this guy’s going to do.'”

That’s when Andrew WK started punching himself. Justin Hawkes, a local documentary-maker, had interviewed him earlier in the day for another music show called M2 during which he’d demanded he run 100-metre sprints between questions. Hawkes knew something might go down on Space and was sitting just metres from him.

He can still remember the sound his fists made on his chest. “I was really worried about him. Physically, he had some dexterity. He was quite amazing,” he says. “At the end he walked off my way … I was quite worried. You can see me moving away. I didn’t know what space he was in.”

Exhausted, Andrew WK pumped his arms up and down and waved to Space’s small studio audience. “When he’d beaten himself up enough he whisked his hair out of his eyes and didn’t really know where to go and went off behind the set,” says Brown. “Hugh and I were like, ‘Okaaaay … we’ll see you after the break.'” This is what shellshock looks like: Brown and co-host Hugh Sundae

Was it a breakdown? Did Brown, Sundae, Cunningham, Hawkes and the rest of the country witness Andrew WK having a meltdown live on air?

It’s a great question, one Andrew WK himself won’t answer. Despite initial interest from his label, Napalm Records, The Spinoff was told he was “not available for interviews”.

Brown also wondered this, but over time she’s come to believe he was showboating, trying to build a public persona in the style of other all-in artists like Lady Gaga. She saw him a few days later in a hotel foyer, dripping wet after jumping in Albert Park’s fountain on a whim. “He wanted to make headlines before mass clickbait was a thing,” she says. “He wanted to make a name for himself as the guy out of the box. It’s really smart. Is it a persona, or is it a character he’s playing?”

His post-Space performance would suggest that’s the case. Afterwards, huffing and puffing, Andrew WK sat down on the couch next to Brown while she tended to his injuries – a bruised and bleeding hand that had started swelling. “I think it might just be my nature,” Brown says. “I don’t like people to feel upset or unsupported.”

In return, he gave her the kind of calm, sane interview she expected first time around. She asks him what had happened. “In case I don’t live tomorrow, and tonight’s my last night on Earth, I wanted to know that I gave all that I had to give for no other reason than the sake of doing it,” he replies. “It’s very simple.”

You’d think Brown would hate Andrew WK. That kind of random spontaneity should be every broadcaster’s worst nightmare. Yet she’s not mad at all. “I absolutely loved it. I love live TV,” says Brown, who gets the same kind of giddy feeling on The Project when things go off track on Friday nights. “When you’re creating a show like Space, you want it to be exciting and interesting. Andrew WK is like the fairy dust. He’s what you want.

“He was weird, but he was amazing. He was one of a kind.”