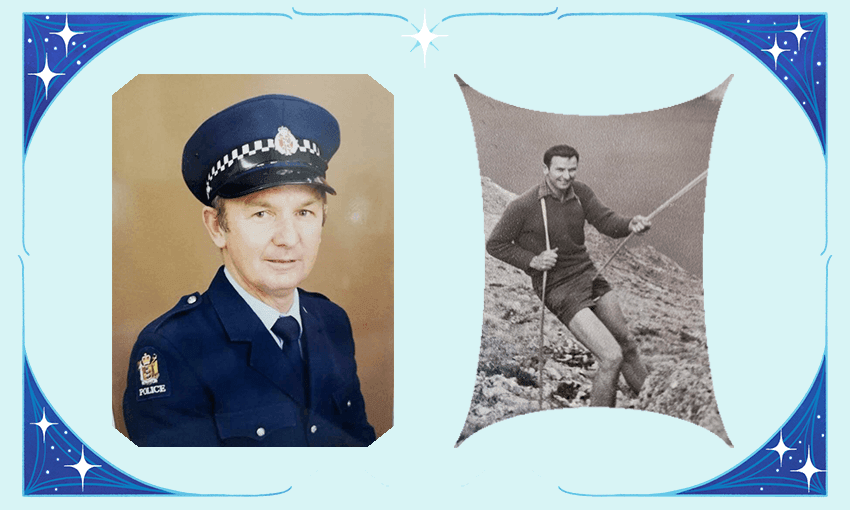 Puanga kai rau: My grandad and the stars

Not everyone can see Matariki. In Taranaki, Airana Ngarewa looks to Puanga to remember instead.

My granddad passed away last year in a brief gap between lockdowns. He was a wildly interesting man, most of his adventures unavailable to me until after he passed on, each thing bequeathed to me and mine the lock and key to some significant event in his past. His police caps remember his time in the force, his working the beat by day while raising five kids alone and by some miracle of time management, studying to become a teacher only so he could better connect with the youth he worked with. A framed newspaper article remembers his time as a gymnast, walking on the top of the Te Hāwera water tower on his hands. His samurai sword gifted to him by Japanese sailors remembers his time on the boat, a second job that almost got him and my uncle Chris killed when their waka capsized in the Waitara river, the swells five meters tall.

I cannot even imagine the shock then partial relief Mum and her siblings must have felt when they were called out of class to be told their father and brother had died, only to learn, when the pair finally made it home, that after a valiant effort the two men had survived. Ray Butler sailed out without permission to rescue Grandad in a dinghy. Tarry Martin with NZ Helicopters flew out and pulled my uncle from the water, performing CPR on him the whole flight back. The relief was only partial because the body of the third man with them, Ivan Manderson, the owner of the waka on its maiden voyage, was never found.

Because of Covid restrictions, I never really got to send off Grandad – the Captain. None of our whānau did. Not in the way he deserved to be sent off. What I did get a little while later though, was a kind of second chance. In another momentary break between lockdowns here in Taranaki, I was able to celebrate the annual Puanga kai rau at Parihaka. Puanga is the star Ngā iwi o Taranaki look for in the place of Matariki – it is our tohu for the new year. The kōrero I know says this is mostly for practical reasons. Matariki not reliably visible on the right fin of te ika. Beautiful as Mounga Taranaki and his ranges are, they occupy a great deal of the night sky. Puanga kai rau’s name is a whakataukī which points to the abundant harvests of this time, kūmara from the soil and kūkupa from the trees.

My second chance began with a trek up Te Purepo, otherwise known as cannon hill. Before the invasion of the pacifist settlement by native minister John Bryce and his 1,600 troops, they mounted a six-pound gun on this very hill. Hence its English name. Atop Te Purepo, the festivities began with karakia, poi, waiata and a kawe mate. For me, the latter meant speaking the Captain’s name – Michael Bourke – remembering him quietly as the rest of the rōpū did the same with those they had laid to rest.

Traditionally, Puanga is a time of reflection and preparation. The old people would harvest what there was to harvest, look to the whetū for any tohu of what the new year would bring and then prepare for it as best they could, readying the soil for the next bout of huawhenua. What I have always thought profound was how the rest of the tikanga marries this physical mahi. While the old people reflected on what brought them this harvest, they would reflect also on everything else that brought them to this moment, everything they’d gained and everything they’d lost along the way. Whānau and friends included. Then while the old people prepared the soil for the next bout of huawhenua, they would prepare themselves for everything else the year would bring, taking forward all that they’d learned from the year gone by.

My Puanga was about the Captain, my reflecting on his life and my reflecting on my failure as a grandchild to get to know him better in life. To sit down with him before he got sick, to enjoy his 70 years of wisdom, adventures and accomplishments. My Puanga was about my preparing to do better for the rest of my family. To be a better moko, a better son, a better brother, a better uncle. Next month Parihaka will host 2022’s Puanga kai rau and I will have to ask myself how well I have done this. What actions have I taken to be better whānau to my whānau and what further actions I can take.

Gardenless and kūkupa now protected, this is my 21st century Puanga. It is a time to remember, reflect and prepare. To spend time in the āhua of my whānau, past and present. Of course, this is not all that Puanga is, few things in te ao Māori are ever this cut and dry. Nevertheless, it is at least a piece of my Puanga – my finding a place for this tradition in my own life.