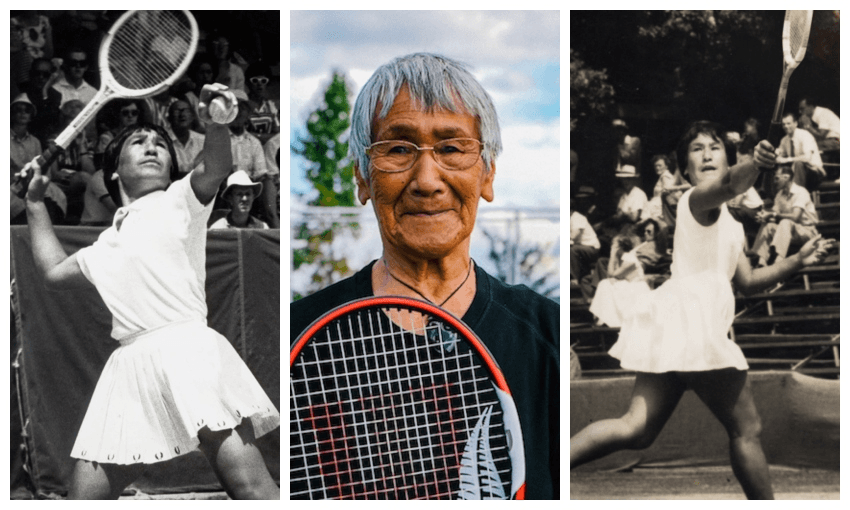 Ruia Morrison has been named a Dame Companion of the New Zealand Order of Merit on the Queen’s Birthday Honours list announced today. A trailblazer in tennis for Māori and women, her extraordinary achievements and relative obscurity made her the the perfect subject for the launch episode of the Spinoff webseries Scratched. Here, Madeleine Chapman tells the story of Ruia Morrison, Wimbledon quarter finalist.

This article was first published in 2019.

Ruia Morrison is standing on her back porch, whacking her neighbour’s overgrown hedge with a tennis racquet. She’s employing a forehand overhead volley technique and it’s working. Satisfied, the 82 year old settles into a deck chair and picks up a cup of tea. Inside the small unit, the walls are lined with framed photos of Morrison as a young tennis player, frozen mid-stroke in front of a large crowd.

“These boys here,” she says, pointing at a Māori tennis team photo from 1947. “They played like Roger Federer plays today. All well balanced. All timing. The boys down here, they were beautiful to look at play.” Sitting in front of the boys, and the youngest in the team at only 11, is Morrison. She’s grinning and holding a small trophy, the first of many she’d go on to win at tennis tournaments around New Zealand and the world. This 1947 tournament was when people realised they were witnessing a marvel. For Morrison, it was just fun to play. “I never had a clue, really. All I wanted to do was play. And that’s all I did. I used to go from one court to another and play because I kept winning.”

The courts Morrison played on as a child were in Te Koutu, Rotorua, built across the road from the marae in the early 1940s. It wasn’t rare for marae around the lake to have tennis courts, and inter-marae tournaments were a regular occurence. But few promising Māori players played outside of those local tournaments and into larger (read: whiter) competitions. So when a wealthy woman from Auckland, Mrs Mowbray, visited Rotorua while on holiday, Morrison’s father took the opportunity to give his daughter a chance.

“Dad said that he talked to her and said, ‘I think I’ve got one that’s going to play tennis.’ And she said, ‘well is she going to be any good?’ He said, ‘yeah I think I’ve got something here.’ I was with them and she said, ‘Well you better give the sprog to me and I’ll take her up and I’ll put her in a club up there, and she can stay with me.’”

“The world just opened so quickly it wasn’t funny, with mentors that came. I went to Auckland and that was the beginning of … literally every day the doors opened and I walked through them.”

Away from family and in a new city at 14, Morrison had nothing else to do but play. Receiving formal coaching for the first time at Eden-Epsom Tennis Club, she quickly advanced through the junior ranks and within a year was playing against the top players both within the club and around Auckland.

Hoani Waititi, a young teacher at St Stephen’s School in Auckland, had seen Morrison play and wanted to help her grow. He enlisted the help of St Stephen’s sister school, Queen Victoria School for Maori Girls, where he taught te reo, and they arranged for Morrison to board and play tennis there. Once again, Morrison was largely unaware of the plans being made around her and simply worried about what was happening on the court and chopping wood for Mrs Mowbray to earn her keep off it.

At 17, Morrison was the top junior player in the country.

“I won three junior titles: doubles, mixed doubles and singles. Then the next year, again. I was actually playing in the seniors as well.”

But when a New Zealand juniors team was announced later that year to play Australia, Morrison’s name wasn’t on the list. Morrison herself was unaware that those around her were packing “A bit of a fuss, which I was aware of, that I was missing from the team and yet I had the three titles.” A couple of top coaches protested the selection and Morrison was added to the squad. As luck would have it, she suffered an infected toe on the trip and didn’t play a single match.

It wasn’t long before Morrison was dominating not just the junior grades but the premier competition. By 20, she was the open singles champion, meaning automatic qualification for Wimbledon. But qualifying didn’t mean anything unless Morrison could find the money to get to London, and according those around her at the time, New Zealand Tennis were reluctant to invest in her talent. As Morrison remembers it, it was Waititi who decided she had to go, and he was going to be the one to make it happen. “He said, ‘This is it. It doesn’t look like she’s going to get a trip overseas and she deserves one. We could be waiting a long time, let’s move now.’”

The fundraising concert, featuring Māori bands from around the country playing to a sold out Auckland Town Hall, raised close to $2000. In 2019 money, that’s $100,000. Within a month, Morrison was on a plane to Wimbledon and the European circuit.

And did she win?

“Yes. Let’s put it this way, I didn’t lose to anybody I should not have lost to.”

Sixty years later, Morrison is unsure how well she did in the first of four Wimbledon appearances. “I thought it was the round before the quarter finals, but apparently, according to Wimbledon and everybody else, it was the quarter finals.” All she knows is she lost to the woman ranked number four in the world at the time, American Betty Pratt. “She just pipped me. She came up, she hugged me, and she said ‘thank you for letting me win.’ And I said, ‘I didn’t. I ran out of steam.’”

Morrison may not have won Wimbledon, but her performances on the circuit had her earning good money, money she didn’t even know she had. “I never had any clue really about money until I came back, it was just going straight into the bank. ” When she returned home for the final time and learned she had winnings left over, Morrison gave it all to the educational trust that Waititi had set up for Māori achievers. “That was the only way I could give it back. In a way it was mine, but really there was so much that people put in so it seemed… I was happy to give it.”

Te Koutu marae sits five minutes by car from Morrison’s home in Rotorua. It’s the hub of the local community, one where tennis has always featured, but never as strongly as when Morrison was in her prime. Morrison’s family and old tennis friends have gathered to pay tribute to her on camera. Off camera, like every brown auntie, they spend most of the time mocking her and each other.

“Be careful with Nan,” says Morrison, referring to her older sister. “If you let her, she’ll talk on and on and on.”

When Nan arrives, she’s surprisingly succinct. “Ruia was spoilt…whereas we were just normal.”

She’s not joking but it’s said almost admirably. Morrison was the only sibling to excel at tennis and travel out of New Zealand to pursue a career. While it was all exciting and fast, Nan worried about her little sister being alone so far from home. “I’m sure it wasn’t good for her. We had each other but she just had herself.”

The telegrams from the late 1950s are sparse in content. One from Waititi simply reads “kia kaha”. But while Morrison was separated from her family because of her talent, she only ever played for them, not to beat anyone. “Never did I think about who I was playing,” she says, sitting inside the marae. “That sounds a bit egotistical, but I was thinking about myself. ‘Cause the only people that I felt, were interested in what I was doing, was Mum and Dad and the people close to me. The old people and the families from here.”

When Morrison returned to Aotearoa each year, she “was lucky to squeeze maybe a week and a half, two weeks at the most, to go visit all the kuia and koroua around and go to the old people and say thank you for the help. They were with me the whole time over there, the old people.”

Morrison’s whānau know that she’s the matriarch of Māori tennis, one of the most successful players in New Zealand history. Morrison herself isn’t so sure she’s an inspiration, and doesn’t feel the need to remind anyone. “I don’t think so because I wasn’t inspired myself,” she says. “I was just doing something that I had to do.”

But every once in a while, when the neighbour’s hedge grows long, she’ll reach for the tennis racquet again.