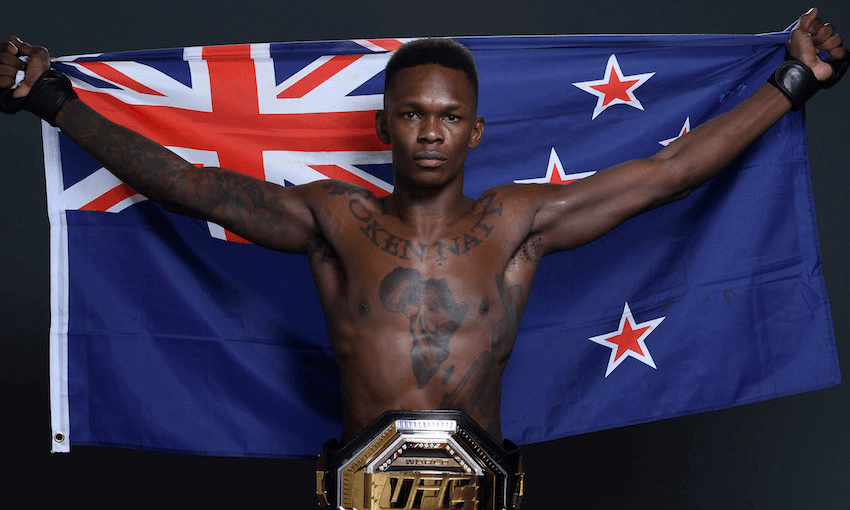 Why Israel Adesanya’s victory was a win for me too

After rising up the ranks of the UFC, Nigerian-New Zealander Israel Adesanya became the undisputed middleweight champion on Sunday. Rapper and producer Unchained XL explains what Adesanya’s win means for his first generation Afro-Kiwi community.

The African community in New Zealand is still fairly small and relatively young. The first few of us trickled in during the 60s and it would be another 40 or so years before the country saw more significant influxes of Black African migrants. My own family migrated to Aotearoa in 1990, becoming one of the first Nigerian families to settle in the country. For first-generation African Kiwi ‘third culture kids’ who like me migrated to Aotearoa via the UK at a young age and grew up here, our challenge is ‘cultural architecture’, by which I mean the process of creating and defining our own identities from scratch.

Growing up, we didn’t really have any generational forerunners to show us what it meant to be Afro-Kiwi. There was no culture or collective identity already in place that could contextualise our experience and inform our identity. We’ve been doing it on the fly. A fundamental part of this process, I believe, is witnessing the rise of our own heroes, icons and legacy-makers. So far, we have looked mainly to diaspora in other countries, predominantly African Americans and British descendants of Africans and Afro-Caribbeans, who become cultural icons through success in mainstream music, cinema and literature.

Resembling us physically and having a cultural experience similar to our own as ‘Westerners’ – more the case with those who are British – these are the people who unwittingly have been carrying the mantle of our representation. However, and through no fault of their own, they cannot truly represent us. They aren’t Kiwi. What we have really needed to see are black individuals who share our specific experiences and embody our own complexities; Black Kiwis who push the boundaries of possibility, who can inspire us and our children to do more and be more.

Israel Adesanya is one of these heroes. Like me, his family migrated to New Zealand years ago, back in the days when we used to play ‘spot the black person’. He grew up in a Nigerian household similar to my own, with Nigerian parents who had very Nigerian expectations. He was also thrust into a double life, figuring out how to be Kiwi in an environment that took every opportunity to tell him that he wasn’t.

Israel became our hero long ago, but now the world has finally seen it. For us as Afro Kiwis, we saw more than a New Zealander defeating an Australian on a global stage to become number one (something we will never get tired of seeing, by the way). We saw someone who would have navigated competing expectations from African parents and New Zealand culture; struggled to feel acceptance as someone perhaps too ‘Westernised’ for Africans and too ‘African’ for Westerners; dealt with the constant challenging of his Kiwi identity from other New Zealanders; faced criticism for being influenced by other African diaspora cultures in the West; simultaneously felt camaraderie and a difficult-to-explain separation from his Māori and Pasifika friends; been told to ‘go back to Africa’ in an argument with a Pākehā; felt embarrassed when school mates mocked the ‘weird’ food in his lunchbox; been told ‘look at your cousins, G’ on television whenever a World Vision or Tearfund ad came on; found trips to the beach with friends a bit awkward and for so many other reasons probably longed to feel like he truly belonged somewhere in both worlds. We saw one of our own win. To us, it reaffirms the fact that we can win too.

Over the past couple of years, I have realised that we are in a position to craft a uniquely powerful legacy. There will never be another first generation of Afro Kiwis. We’re it. And as more of this generation enters adulthood and starts bearing the second generation, our stories start becoming their history. Our own history as ‘first genners’ is informed by our parents’ stories of a proud culture, challenging upbringings, the survival of war and conflict, the traversing of oceans and the struggle of assimilation. Revealing the depths of that struggle isn’t always easy for our African parents; I believe most of us have only scratched the surface of these stories.

It’s these experiences that have shaped our parents’ desires for us to choose for ourselves from a narrow selection of professions; medicine, law, engineering, accountancy (pharmacy and architecture are acceptable too). Although culture and status both play a huge part in this, it’s also about simply wanting us to succeed and not have to endure the hardships they had to. From their perspective, it’s risk minimisation, and I understand and respect that. Nevertheless, we migrant kids can’t continue to shoulder the burden of this expectation at the expense of our true passion and talents. Some of us legitimately want to enter these professions, and that is awesome, but I shudder to think how much untapped athletic skill, musical virtuosity, tech ingenuity or literary prowess will be locked away, never to bless the world with its light. We owe that light to our kids. Our parents gave us amazing stories, and now it’s time to write ours for our own children. So, what will they be? Israel, at the very least, will write that he became a sporting world champion. And in doing this, he has paved the way for us to write our own odds-defying stories. He won, and now we must go and win.

To say we feel proud of Israel Adesanya is a massive understatement. Right now we feel untouchable. As a music artist, I see fellow heroes in the making like Raiza Biza, JessB, TAPZ, Estère, KVKA, Mo Muse, Mukukā, Gino October, Thabani Gapara, Phodiso and many more, and I say hell yeah, we’re pushing these boundaries and we’re gonna win too. I see my fellow Black Kiwis killing it in other fields and I know they’re gonna win as well. As a board member of the Association of Nigerians in New Zealand, I help recognise and celebrate young Black Kiwis excelling in academia, sporting, fine arts, literature etc and trust me, they’re definitely gonna win. We’re all gonna win.