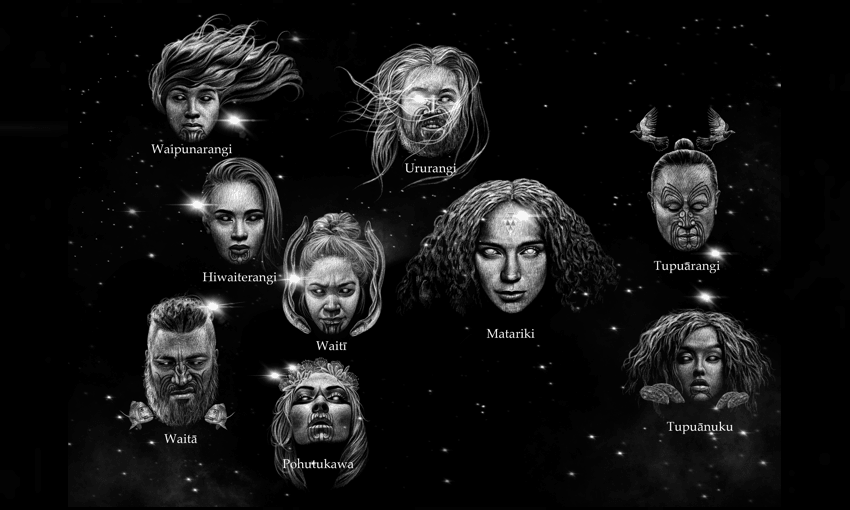 Click here to learn how to set the maramataka dial, and you’re on your way to setting the New Year dates!

The bright tohu stars Matariki (Pleiades) and Pūanga (Rigel) will soon rise to indicate the New Year. Matariki is used throughout Aotearoa, especially towards the east coast, and Puanga is often used around the West Coast. When Puanga rises in the east, the summer star, Rēhua (Antares) sets in the west, Rēhua being another tohu to indicate the Māori New Year.

Pūanga rises in the east around the Ōturu date of Pipiri, approximately June 24, 2021. At the same time, Rēhua sets in the west.

Matariki rises around the Tangaroa phase of Hongongoi, approximately July 2-4, 2021.

Although the whetū rise, it does not mean we will always see them with the naked eye, especially in Auckland, which cloaks the night sky with city lights.

So what’s the difference between Pūanga and Matariki?

When our tūpuna navigated the Pacific oceans closer to the northern hemisphere, Matariki was leading. As they travelled further south to Aotearoa, Puanga became brighter in some regions. The closer we are to the sea the more we are influenced by Tangaroa and the visibility of stars can change. In Whanganui it is said that mountains block the view of Matariki, therefore Puanga is used.

In Auckland, Tainui, Manukau, Raglan, Kawhia and some northern Ngāpuhi regions, Pūanga and Rēhua are the New Year stars. In areas around the East Coast and in-land iwi, Matariki is the leading star that leads this month and divides the year.

In Hawaii, they call their pōhutukawa flower lehua. When the Rehua star rises the lehua flower blooms. This maramataka knowledge was brought to Aotearoa more than a thousand years ago. Today these stories help keep our maramataka and connection across the Pacific alive.

Three key things to celebrate for the Māori New Year

It is exciting to know that from 2022 we will celebrate Matariki as a public holiday and dates will be set for the next 20 years. Previously, the Māori New Year was celebrated for one week between the phase of Tangaroa and Whiro in July and varied from place to place. The New Year is different everywhere we go. Having a national date next year will be a great way to create awareness and revitalise Māori knowledge and practises, and align us around key dates.

How do we know where to look for Matariki and Pūanga?

One trick is to find the Taumata-kuku star (Aldebaran) and place your left pinkie on it, your palm facing you. Now look to your thumb (keep your fingers close together). This is Matariki. Puanga is the bright star to the right and higher up from Matariki.

Tangaroa phase, June 2-4: We are told that when the Tangaroa moon appears during the month of Pipiri, Matariki will rise. It is difficult when we are trying to align maramataka with a Gregorian calendar. In the maramataka we are still in Haratua (May). Matariki will rise exactly one moon cycle from these dates on July 2-4.

Whiro phase, June 8-10: The right time to slow down and rest. This is also the best time for stargazing as these are the darkest nights. Stargazing was done by our tūpuna in the morning before dawn, not at night.

Tamatea phase, June 14-17: Tamatea a ngana, Tamatea a hotu, Tamatea a io and Tamatea kai ariki. Unpredictable and changing weather, people and energy flow. Be cautious and prepare for the unexpected.

Oike, June 9: Give back to Papatūānuku, Mother Earth.

Otane, June 16: Give back to the Tane Mahuta, the forest.

Ouenuku, June 23: Give back to the Ranginui, the heavens.

Huna, June 29. Give back to Tangaroa, the ocean.

This is intended as a guide to help you learn to about key dates in the maramataka and read the tohu (signs). Tohu will change from area to area and therefore while the dates above are accurate for the Auckland Manukau Harbour area, dates may vary slightly for those in other rohe.