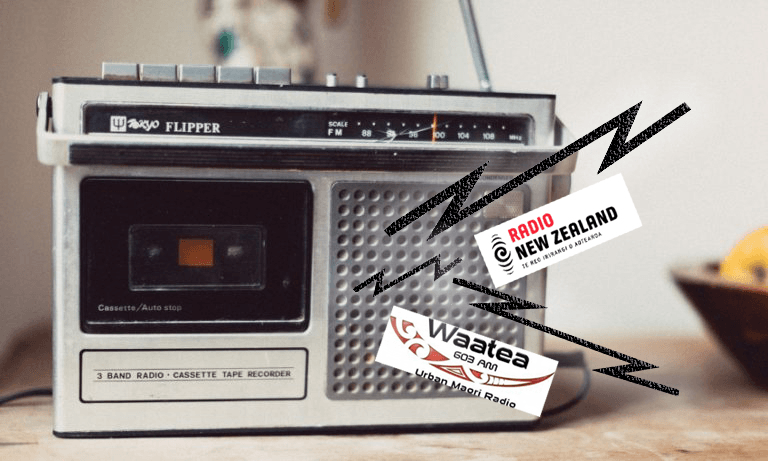 The controversy over the fate of RNZ Concert, and the proposed youth music network to replace it, have sucked up a lot of attention this week. But the idea the government might foot the bill for a new youth brand haven’t gone down well with iwi stations suffering from years of underfunding, writes Alice Webb-Lidall.

In the middle of Māngere, the home of Aotearoa’s largest Māori population, lives Radio Waatea. It is Auckland’s only bilingual radio station, broadcasting in te reo Māori and English. It’s one of 21 iwi radio stations in the country.

These stations were set up to promote te reo Māori and to give a platform for Māori people to tell their stories and play their music. But after almost 30 years of iwi radio, most stations are struggling to bring their product into the digital age. They’re struggling, they say, because of limited funding.

The debate around funding of RNZ Concert has played high in headlines over the last seven days. Countless high-profile figures, including a former prime minister, and former cabinet ministers of both main parties, have thrown their considerable weight behind the campaign – a successful campaign – to retain the status quo.

Executive Director of the New Zealand Māori Council Matthew Tukaki says this level of concern has never been given to the state of Aotearoa’s iwi stations.

“All these politicians have all gathered together to save Concert FM, and yet they can’t take the time to have an honest conversation about the future of Māori broadcasting,” he told The Spinoff.

The iwi stations currently get $500,000 each per year from Te Māngai Paho, but Tukaki says for them to thrive, these stations would need at least triple this budget.

“It is an absolute insult and then we’ve got the prime minister saying, ‘let’s protect Concert FM and let’s find the money’ but how about you find some money for us for once? Instead of talking about it, actually bloody well do it.

“$500,000 to run an iwi Māori radio station doesn’t give it the potential or the ability to get out there and market itself and grow itself. It doesn’t get the ability to grow the audience, you’re always just treading water.”

Kuramahukihuki Ratapu, operations manager at Radio Waatea says the funding would need to significantly increase if Waatea wanted to bring their station into the future.

“Two million would be great… It’s all about having the right resources. Those with the reo, those with the skills in either journalism or radio announcing., When you get people who are fresh out of uni or school they’re all thrown in at the deep end and we’ve got to stop doing that.”

Ratapu says it is disappointing that iwi stations seem to get ignored. She has no hard feelings against Concert or any RNZ plans for a youth station, but says there needs to be more government recognition of the work iwi stations do for our Māori communities.

“We’re a treaty partner, there are two parties to that… For many years there’s been talk of bringing the number of stations down, but that’s not going to sit well with iwi, and it shouldn’t. It needs to be first and foremost for the government to take us seriously.

“People fought for the language and they fought for Māori radio so it’s not going to go away anytime soon, but we do need to look at the funding and those resources that are being put in.”

The latest plan for RNZ, to save Concert’s FM frequency and establish the new youth brand is being seen as a success by those who had staunchly advocated for saving the classical music station. But Tukaki says the youth station isn’t a necessary addition to an already crowded market.

“We don’t need it, because the youth market is already well served. Look at 95bFM in Auckland, so why are we continuing to say that the youth market is underserved in Aotearoa when they’re turning online anyway? They’re going to podcasts, so what are we doing creating something that is trying to compete with Spotify?”

For him, the importance of iwi radio is to create a space in the media where Māori voices are heard, acknowledged and respected. He doesn’t think that space would exist without it.

“What talkback radio station doesn’t put us down? We have TV3’s AM breakfast show simulcast across the Magic Talk radio network and some of the views that come out of that in the mornings are so off. We don’t have the opportunity to push back through the telling of the real story of what might be going on in the te ao Māori world.”