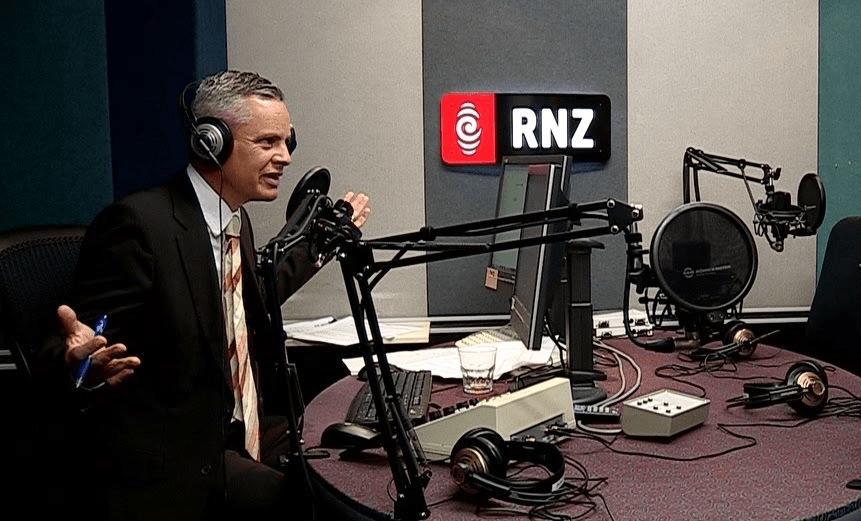 When I started learning te reo Māori in earnest this year I had one main fear: humiliation. I expected that Pākeha might praise my efforts but I worried Māori speakers might be critical of my floundering attempts.

The reality has been the opposite. I have had nothing but encouragement from Māori. I’ve had huge support from my kaiako and tauira at the wānanga, from language advocates Scotty and Stacey Morrison and from RNZ work colleagues Mihingarangi Forbes and Shannon Haunui-Thompson.

Armed with my tenuous grasp on the language I began to weave it into my radio presenting as co-host of RNZ’s Morning Report. We’ve always done basic greetings in Māori on the show but I wanted to do more and began to extend the greetings and include basic information in Māori – such as the days, dates and temperatures for the main centres.

That was when the backlash came, or perhaps it was a whitelash. I have two screens up while presenting Morning Report – one with the scripts and the programme run down and the other to watch the feedback coming in from texts, email and social media. I get a thrill speaking te reo live on radio. I love the sound of it coming back at me through the headphones and out into the world, mixed up with the very real fear that I might drop this new treasure I’m clutching but can’t fully control.

Then you read the text messages. Now I’m only talking about maybe ten messages from hundreds of thousands of listeners but grouped together straight after I’ve spoken they have quite an impact. “RNZ. Gee. Listen to Guy Esponsa go with his Maori,” wrote one listener from Gisborne, butchering several languages at once. “Dose he come with a grass skirt and dance with a spare too? How long before you have to wear shoe polish on your face?”

Some listeners enjoy hearing Te Reo in the mornings. Others, not so much. pic.twitter.com/lHMYkSR9hx

Another listener from Rotorua said he had “no interest whatsoever in learning the Maori words for the days of the week or anything else”. He said RNZ was adding more Māori language “to annoy the hell out of its listeners” and concluded I was the worst offender. “As for Guyon Espiner’s 7am greetings, well that is just pompous exhibitionism.”

Another listener – I recognise the phone number and often these people give full names – got in touch every day to tell me I was speaking gibberish, and sounded like a monkey. It’s not something I want to think too hard about.

The emails take a little longer but they come in too – from people agonising about the ‘Maorification’ of the country. When you get an onslaught like that your first reaction isn’t rational. I know that there can be more than 250,000 people listening – so getting maybe a dozen messages a day is nothing right? Logic tells me to ignore them but it doesn’t stop the feelings of humiliation.

But then the encouragement comes in, often from Māori speakers but more broadly too. Sometimes the real language champions – who have actually been doing the hard yards pushing the boundaries for years – come out in support, often on Twitter, and the warmth and confidence flows back.

This pattern continued for a few weeks and then a funny thing happened. The barrage of texts and emails stopped. Oh a few still come in – more recently from Pākeha saying they are learning and want me to slow down so they can pick up the days and the dates. They’re genuine messages sent in good faith.

The moaners might not like it any more than they did but mostly they’ve stopped voicing their complaints. In a small way a new normal has been established. On Morning Report, a ‘mainstream’ news programme, you are going to hear greetings, temperatures, phrases, sentences, questions and place names – in Māori.

I decided to push it a little more. Kei hea te pūtea? I said to Auckland Mayor Phil Goff, asking where the money was coming from for a transport project. Pātai tuatahi ki a koe, I said to National leader Bill English, signalling my first question. E rua, e rua, I nudged Marama Fox, on whether National and Labour were just the same.

I waited for the pushback from the audience but nothing came. Great. They must be ready for more.

Santa, the Easter Bunny… and the Matariki possum?

Matariki may be our new indigenous public holiday, but is it tika to make money off an event that's so culturally significant to Māori?
By Reweti Kohere
Staff writer