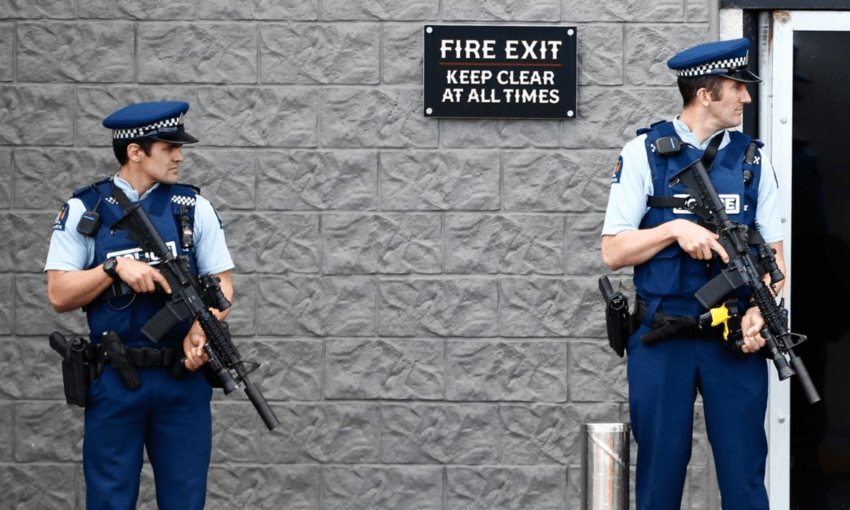 Armed police during a raid on the Headhunters gang in 2015 (Photo: Getty Images)

Armed police during a raid on the Headhunters gang in 2015 (Photo: Getty Images)

On Friday it was announced that Armed Offenders Squad patrols will be trialled in Counties Manukau, Waikato and Canterbury over the next six months. The data suggests this will increase police violence and unfairly target Māori, writes Emilie Rākete.

Police Commissioner Mike Bush announced on Friday that cars of Armed Offender Squad officers armed with assault rifles will patrol New Zealand’s streets. As a community organiser active in criminal justice spheres, this policy concerned me. More than that, it confused me. Despite Bush’s claims that this six-month trial is a response to the evolving context of law enforcement, it appears to fly in the face of evidence.

Mike Bush argues that roaming units of heavily-armed commandos are required to respond to the increased danger that police officers and New Zealanders face on a day-to-day basis. Yet data on firearm crimes, released to me under the Official Information Act, tell a different story. Firearms were involved in less than 1% of alleged assaults on police officers. The rate at which firearms are used against police has been declining since 2015, when records began. There is no evidence to support the claim that police are less safe now than they were four years ago. Nor does the data support the idea that firearm violence is worsening. Firearms are used in less than 1% of all crimes, a rate which has barely changed since 2013. Despite the increased intensity of media coverage, we have no reason to believe firearm crimes are becoming an everyday danger. Nothing suggests firearm crimes are a problem only roaming patrols of armed police can stop.

The exception to these trends, obviously, was the white supremacist terrorist attack in Christchurch. Indeed, Mike Bush explicitly links the random deployment of the Armed Offender Squads to the attack, frequently mentioning March 15 in media statements. Social theorist Naomi Klein calls this the shock doctrine – the tendency for governments to push through unpopular or controversial policies under the pretext of an emergency. In Christchurch, in the weeks before the terrorist attack, frontline police were armed in response to an alleged firearm threat. As I wrote here, the only danger to the public was the self-described “panic shots” that police fired through a nearby wedding venue. When the terrorist attack did occur it was ordinary police, who kept their guns secured in their cars, who arrested the Christchurch mosque shooter.

If Mike Bush had his way, it’s possible – but of course, not certain – that an SUV full of riot cops would have gotten there faster than anyone else. But we can’t structure our everyday lives around the most extreme, horrific possibilities we might face. We need to respond proportionally. We need to respond in a way that doesn’t change our lives for the worse. This trial will see Armed Offender Squad units sitting in their cars, drifting around neighbourhoods waiting for “any events or incidents that require enhanced tactical capabilities.” This will almost never mean an unfolding politically-motivated atrocity. Most of these squads will simply be cruising around poor, brown neighbourhoods, waiting for something to happen. When officers are in that mindset, they will find something to do.

Police statistics speak for themselves on the question of their use of force. Māori are almost eight times more likely than Pākehā to be the victim of police violence. Police set their attack dogs on Māori at more than 12 times the rate they set them on Pākehā. This is the context in which Mike Bush wants to radically escalate the level of police weaponry. I believe by putting automatic rifles in the hands of first responders, Mike Bush will cause more people to be shot and killed by the police, the majority of whom will inevitably be Māori. This is a step towards the Americanisation of law enforcement in New Zealand, a step that isn’t based on evidence and that nobody asked for. Like in America, all it will take is the appending of “and I think he has a gun” onto the end of a routine 111 call for the police to throw the potential of deadly force into a tense situation. Tamir Rice, a 12 year-old playing with a toy gun, was killed because of policies like the one Mike Bush is pushing on New Zealanders. Before it’s our tamariki bleeding out in the dirt, it’s our responsibility to bring this bizarre experiment to an end.