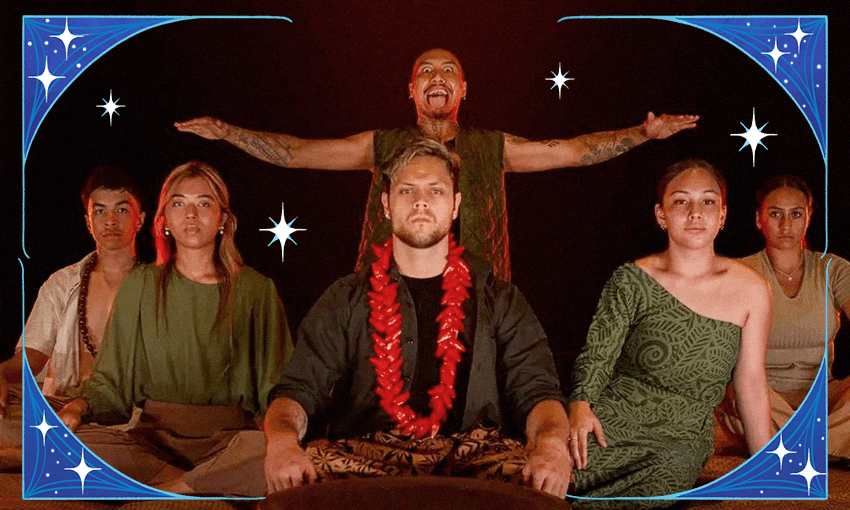 Some of the cast of Māui (Image: Archi Banal)

Some of the cast of Māui (Image: Archi Banal)

Stories of the demigod are told throughout the Pacific, and now on the big stage. Sela Jane Hopgood speaks to director Hadleigh Pouesi.

At the end of 2021, Hadleigh Pouesi received a phone call that would make one of his career dreams as a choreographer, a dancer, a Pacific creative come true.

Pouesi was asked to showcase his show Māui, which was first staged in 2018, on the week of Matariki at one of New Zealand’s largest theatres, Kiri Te Kanawa Theatre at Te Pokapū Aotea Centre. “To perform at the flagship venue for performing arts was always on my bucket list and it’s definitely up there with some of the highest achievements I’ve been able to do over my choreography career,” he says. “So many of my Pacific heroes and international favourites have presented here, and to add my name to that list is a dream come true.”

That career he speaks of spans over 15 years and includes growing street dance in Aotearoa. In 2008, his crew Sweet & Sour brought back New Zealand’s first gold medal from the prestigious HHI World Hip Hop Dance Championships and since then he has travelled the world as a backup dancer and choreographer. He’s also the director of Freshmans Dance Crew and is on the board for the Fresh Movement Arts Trust. Over the last eight years, Fresh Movement has created a number of full-length works, toured the United States of America, Australia and throughout the Pacific, created new events that showcase young talent and created employment opportunities for over 100 young performers.

On top of all his creative work, he’s also a youth worker, managing Zeal West, a dedicated youth centre in Henderson that supports young people through networking, kōrero and upskilling. Pouesi has been improving outcomes for youth for over ten years.

Pouesi will be the first street dance director and crew to hold a full length work at Aotea Centre, and he’s beyond honoured.

Māui is the brainchild of Pouesi, but has also had choreographic leadership in the past from Christopher Ofanoa and Leilani Elliott.

Pouesi’s wife is an early childhood educator and around their house are children’s books including one of Pouesi’s favourite stories as a child, Māui by Peter Gossage. “I picked one of the books up and reread it, and then I thought, what is the story about Māui supposed to leave us with?” So Pouesi went down a research hole, where he learnt that Māui wasn’t just a Māori character, but one that is spread throughout the Pacific. “Māui’s characteristics are similar to Pacific people and so I was inspired to create something that would showcase this knowledge of Māui and I wanted it to be uniquely Pacific that honours our stories,” he says.

“At such a young age we let go of the Māori and Pacific stories and so Māui is about revisiting the tales we were told in primary school and kindergarten and retelling them through a contemporary lens,” he says. And that’s what one can expect from the show – a breakdown of the character of Māui, from him being a powerful warrior, Māui being joyful, Māui the prankster, the loving Māui, the demigod that most children in Aotearoa have grown up to learn and love. “Every time we’ve put this show up, we have grown and developed the story a little bit more and that includes the cast. In the past we’ve had around 25 performers. There’s now 45 in this year’s cast, which includes Freshmans Dance Crew as well as members from Saints Dance Academy, students from The University of Auckland and a couple of high profile Pacific choreographers that will make guest appearances throughout the show, but you’ll have to buy tickets to find out who they are,” Pouesi teases.

The cast have had only a week to rehearse before showtime on Thursday June 23. Pouesi says Māui the show is a newborn baby that has been growing since 2018. “The baby has legs, it has mana, it has spirit, so when we all gathered together to practice we just needed to refresh ourselves on the purpose of our baby, so we weren’t starting from scratch.”

Pouesi is honoured to have his show chosen to lead the festivities of Matariki. He admits that with such honour comes a lot of pressure, but is reminded that there’s only one first and respects that by ensuring the poetry, live music, special effects and fusion of hip hop, Pacific, Māori and contemporary dance that will be performed is top shelf. “What we’ve done is captured the stories that have travelled throughout the Pacific for hundreds of years and re-told them like never before,” Pouesi says passionately. “It’s an hour long show, so it’s enough for you to get inspired, get motivated about Māori and Pacific tales and then hopefully set you up for a great Matariki weekend.”