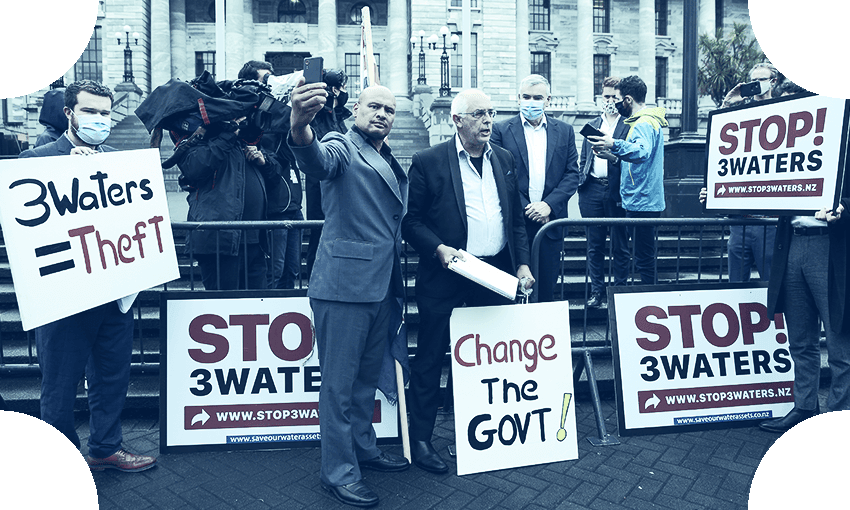 Political democracy is not simply the right of a powerful majority to do whatever it wants regardless of the effect on anyone else, writes Te Maire Tau.

North of Christchurch, just outside of Woodend where I live, is a sign that reads “Three Waters Apartheid”. This is ironic, since the placard sits on a Māori reservation, where local Māori were segregated to live, like indigenous people across the world whether in the United States or South Africa. The Natives Land Act 1913 of South Africa, the basis for apartheid, was based on a template used throughout the British Empire as far back as the 1850s – in New Zealand, Canada and Australia.

These signs are all over the country; I spotted one in Warkworth over the summer. It’s one of the grosser expressions of a backlash against the Crown and local government partnering with Māori. The more socially acceptable face of this movement is the complaint that such partnership is “undemocratic”. This is the position of some councils opposing the proposed three waters reforms that would see greater iwi involvement in governance of drinking, storm and wastewater.

What opponents really mean by the use of “undemocratic” is a desire that the majority have for the right to impose their narrow world view on the minority (in this case, Māori). This is a fundamental misunderstanding of what democracy means. Political democracy is not simply the right of a powerful majority to do whatever it wants regardless of the effect on anyone else. Western democracy evolved in the United Kingdom as a defence against the tyranny of the king, Charles I. It developed over time to its modern status, where a system of laws and political institutions protect the rights and interests of its citizens.

This belief in prioritising protections informed the British empire’s declared intentions towards its indigenous peoples. The Treaty of Waitangi and the countless other treaties signed among the different tribes were mechanisms designed to protect the interests of Māori during colonisation. The Crown gave clear instructions to William Hobson, first governor of New Zealand, that he was to point out to Māori the “dangers” of the “resident settlers amenable to no laws”, and that Māori needed the “Queen’s protection”. To that end, the 1852 New Zealand Constitution included a section setting out that Māori were to have their own form of government. This section remained until 1986, when the 1852 Act was removed by the Labour government.

Self-government was a long-acknowledged right for peoples within the Empire and the UK and we only have to look at the bailiwicks of the Channel Island in the UK as an example. Scotland, Ireland and Wales all have their own form of government while acknowledging the sovereignty of the Crown.

The oppression of minorities, however, was a goal of powerful settler governments whether they were the majority or the minority; “democracy” was more a convenient excuse when they found themselves in the majority.

As we know, the New Zealand settler government through Sir George Grey used the democratic process to marginalise Māori, even when Māori were the majority. Māori were prohibited from voting because they were not titled land-owners, despite clearly owning most of the land.

Not all premiers viewed the world like Grey. Henry Sewell, New Zealand’s first premier, in dealing with Māori and their right to govern, warned about the new “ultra-democratic government”, in which Māori would not be allowed their “fair share of government”. Today, we would probably call Sewell’s “ultra-democrats”, “ultra-nationalists”. Sewell went on to say that the view that “all” were subject to the same law when dealing with indigenous peoples within the empire was “flimsy reasoning”. Another clear-headed Christchurch leader, James Edward Fitzgerald, the founder of the Christchurch Press, argued for the right of Māori to self-government when he supported the Runanga system which would supercede the provincial government.

But because of the “ultra-democrats” that characterised the settler government, the political protection that Māori were assured of was abolished in favour of majority rule. Central and local government now had a free hand and Māori were placed in the line of the musket during New Zealand’s civil wars.  Since these wars, neither central nor local government protected the rights of Māori.

When New Zealand’s economic golden boom faded in the 1960s, central and local government and rural New Zealand conspired to acquire the remnants of Māori land by passing the Town and Country Planning Act, the 1967 Ratings Act and the 1967 Māori Affairs Amendment Act – a nasty trifecta that allowed local government to acquire Māori land by simply telling the residents who had lived on these reservations that they weren’t allowed to build on their reservations. Where else were they to go? In 1971 residents in my village of Tuahiwi and other pa were informed by letter that their land was now General Crown Land. It’s no mistake that the largest land owners on Māori reservations today are the descendants of the county councillors.

That’s a reminder of a second irony: the section where the “apartheid” sign stands near my home, which is on reserve land, was meant to be “inalienable” from its Māori owners but was acquired by the then Rangiora County Council through “democratic” means. And the ironies do not stop there as far as “three waters” is concerned.

Even before the 1950s, local government managed to drain all of our lagoons set aside for our people to mahinga kai despite court orders protecting the “uninterrupted flow of water”. The land upon which the Christchurch sewage ponds are located sit upon Tuahiwi land compulsorily taken by the city council under the Public Works Act in 1956. Te Waihora /Lake Ellesmere, the largest area of land owned by the tribe, is subject to stormwater and countless toxins from the rural sector and urban dwellers – all permitted by local government.

In economic terms Māori are an externality sink for local government water infrastructure. All because local government has simply acted in the interests of the majority regardless of the legal assurances provided to Māori. At the same time, a third of Ngāi Tahu settlements still do not have reticulated water supply from local government.

Local government relations in the South Island and engagement with Māori is certainly far better than it was. We have to work together. But we do not need “ultra democratic” rhetoric that we find in the United States, which assumes that might is right, regardless of the consequences. I’ve been to those reservations and Ngāi Tahu will resist heading in that direction.