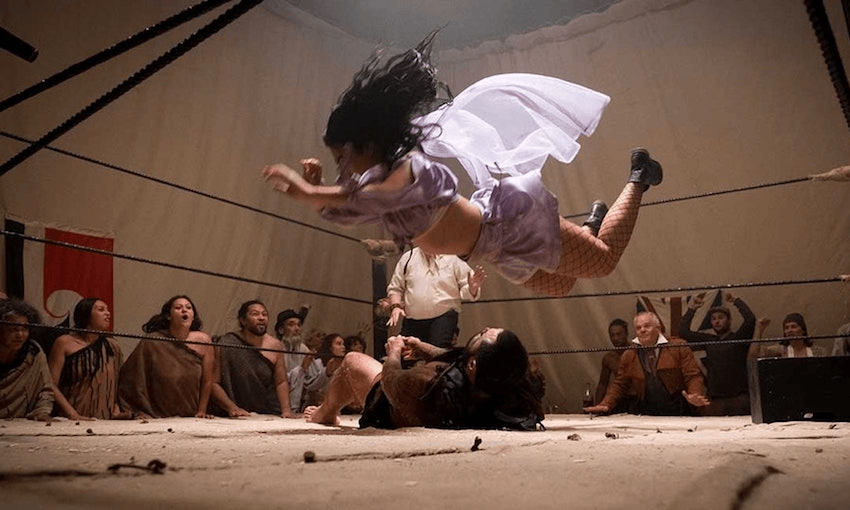 Māori versus settlers in the wrestling ring? Hell yes!

TVNZ’s new online-only series Colonial Combat pits the the inhabitants of Kauri Bay – Māori, settlers, men, women, and many more besides – against each other in the ring. Dan Taipua reviews.

The place is Kauri Bay, kind of. The year is 1836, sort of. The people are Māori, and All Other Comers. The stakes are the chieftainship of hapū, the free passage of export, gunpowder, sex work, the printing press industry, tino rangatiratanga, romantic love, filial piety and the Championship Wrestling Title Belt.

Released in 12 online-only episodes for TVNZ, Colonial Combat is the fictional tale of Aotearoa’s first wrestling promotion. It has a pitch that fills a lot of underserved areas in the local TV market: New Zealand hasn’t produced any action-oriented programming in years, we struggle to find naturalised plots for bilingual content, and as pointed out in an earlier article, Māori have an existing fondness for wrestling formats. The novel premise of the show is matched both by its ambitious scale and its multitude of subplots, each of which deliver their own highs and lows.

Despite the simple outline of ‘”wrestling but old-timey”, the plot for Colonial Combat is densely packed and in all fairness probably overcrowded. It’s an ensemble piece, so there’s no set lead to guide us through the fictional Kauri Bay of 1836 with a clear sense of the world we’re looking at. There is a Cockney fight promoter, a carnie type running the wrestling show in a tent. There is a young mixed-race man born in London who runs a printing press, is involved with the wrestling and is also in the middle of an identity crisis. There is a chief and his brother and a wife in a love triangle. There is a brothel madam who is also a wrestling trainer who is also tied to industrial development. These stories move in and out of the wrestling setting, making it the tale of a town rather than the ring.

The dense plotting sets a difficult pace at only 15 minutes per episode, but the show manages to establish a world of conflict and comedy. Pre-Treaty settings are rare in the history of local TV, and Colonial Combat makes a solid effort to flesh out history with a story of competing interests. In the time before British rule, power and influence was in constant flux and fought for by all means available. The wrestling sequences in the show are an especially good dramatic proxy for that competition over power and favour, a setting where conflicts can be writ large and loud while serving spectacle.

A note on the wrestling: within the world of the show all matches are “shoot” style, meaning they are “real fights” and more in line with MMA or bare knuckle boxing. At the same time though, each fighter carries the tropes of professional wrestling: costuming, archetype and stereotype, even entrance music. It’s a decent postmodern mashup, and sets the action somewhere along the lines of Sherlock Holmes (2009) and A Knight’s Tale (2001). Fictional wrestling matches are notoriously difficult to shoot, since they’re already fictional and take anywhere between five to 50 minutes in real time, so this stylisation helps.

The colonial combatants are made up of stunt performers and members of real-life wrestling promotions like IPW (Impact Pro Wrestling). If you have a personal trainer there’s a decent chance they’re in that ring. Each fighter stands in for their backer, so we have a convict Australian fighting for the British industrialist, a mamau kaiako (traditional Māori wrestling sensei) fighting for the local hapū, and a range of international ringers from the islands and Africa. Special focus is put on real-life champ Candy Lee from Impact Pro Wrestling, who has a multi-episode arc that addresses her transgender identity.

Even if wrestling isn’t your thing, it’s a relief to finally see any kind of action in local TV show. The long drought of action-genre content in New Zealand makes little sense when you consider the wealth of stunt talent in the country. Kiwi stunt performers have filled the ranks of countless Power Rangers spin-offs, half a dozen JRR Tolkien adaptations, superhero films like The Wolverine, sci-fi epics like Avatar and Ghost in the Shell, and all manner of small-to-mid-size-budget productions. Tapping into this resource and the emerging talents of Kiwi wrestlers is long-overdue relief. as much as the performers deserve a spotlight on screen, we also deserve to see them in full bone-crunching flight.

The full first series of Colonial Combat is online right now and free to view, and its 10th and final episode leaves  space for a very welcome second series.