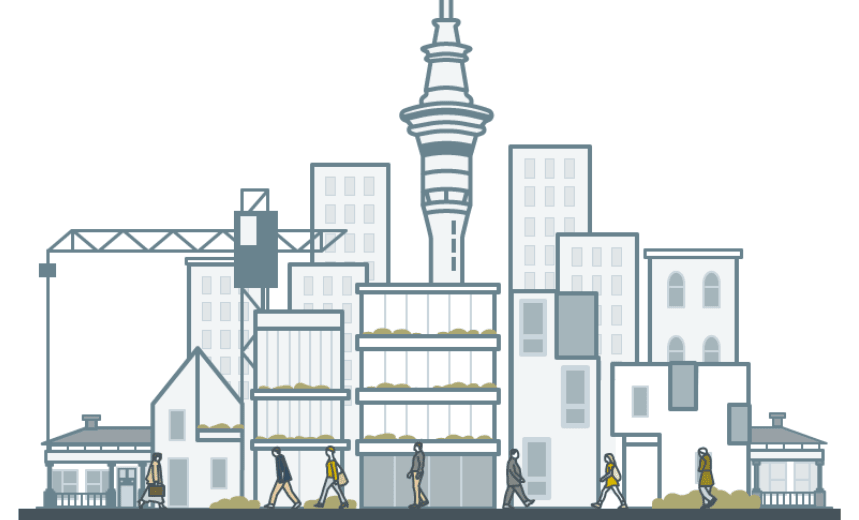 Coalition building: a broad church gathers to back a huge boost in Auckland housing

Enough heeding a small group of angry residents, time to listen to the experts. That was the message yesterday at the launch of the pro-Unitary-Plan campaign group Coalition for More Homes, writes Tim Murphy.

The rowdy hordes have had their say on the Unitary Plan. Now it’s time for the experts.

So says the prosaically named Coalition for More Homes, launched on Monday afternoon to turn the heads of Auckland Councillors away from the angry influencers of the leafy suburbs – and towards housing, development, architecture, academic, economic, transport and environmental luminaries.

These supporters of the Unitary Plan spoke out beside a church aptly named the “Meeting House of Auckland Unitarians” which aims for “reason, tolerance and freedom”.

The Coalition for More Homes is, on the face of it, a collection of unlikely bedfellows: the Salvation Army and Monte Cecilia Housing Trust coupling up with multi-level apartment developer Ockham Residential; Jasmax Architects and the Property Council sharing with Habitat for Humanity and Generation Zero. Heaven knows when they’ll all be on the same side of an ideological divide again.

The campaign’s launch of a letter calling for the Auckland Council to pass the Unitary Plan with immediate effect came with a strong implication of it being Received Wisdom to back the recommendations of the Independent Hearings Panel.

It is a voluntary campaign – no single outfit is funding it to speak out. If needed, Generation Zero, the zero-carbon urban lobbyists, will stump up some dollars to get the message out in the next fortnight.

Patrick Reynolds, the man from TransportBlog wearing his trademark inner-city, designer-guy hat, introduced the “broad-based coalition who want to try to help the conversation around the Unitary Plan” and spoke of something that sounded like “dwellings of all typologies”. The plan wasn’t perfect but “we believe it’s good enough”.

Shamubeel Equab, economist, author and participant in The Spinoff’s War for Auckland campaign, said the plan was “big and dense and long, but the thing I love [yes, love] about the Unitary Plan is it’s bold, visionary and pragmatic”. It was a “critical first step to allow us to build houses”.

Peter Jeffrey of the Community Housing Providers’ Network, had a good device for visualising Auckland’s housing deficit of 40,000 homes in the coming decades: “If you put a tent up for every house required you would have a tent city the size of Gisborne or Whanganui.’

He urged those opposing densification to see the greater good. “Many of us believe our neighbourhoods are special and it’s a good belief, but we cannot let neighbourhoods based on the size of sections or uniqueness stand in the way.”

Jeffrey raised two disappointments. The Hearings Panel had left out of its recommended plan provisions for Inclusionary Zoning (where affordable houses must make up a proportion of those built) and Retained Affordable Zoning where any benefits from development sales are retained by the community.

His comments tapped residual concern that without enforced affordability, today’s big problem might not be directly, or quickly, addressed.

During questions, Mark Thomas queried whether the campaign might – tactically – move to have Inclusionary Zoning re-included. “Is there an opportunity to improve one element in the plan without opening everything up?” That would win support from those wanting more affordable homes.

Ockham Residential’s man, Mark Todd, reckoned the plan’s cutting of regulations would see varying price points on new houses in all parts of Auckland in any case. His firm had two Special Housing Areas on the go; one had an average sale price of $630,000.

Equab noted a substantial capital injection from central government for new homes through Housing New Zealand could yet ameliorate some of the affordable housing concerns.

The behatted Reynolds assured the room, “this will not be the last plan. As the saying goes: ‘People make plans and the gods laugh.’”

Generation Zero’s Auckland coordinator Leroy Beckett wants this one actioned, now. “Councillors have listened to a small group of angry residents for too long. Now they need to listen to the experts.”

Ominous. He’ll be hoping the much-derided, pre-Brexit warning from the successful Leave campaigner Michael Gove that people of the UK “have had enough of experts” doesn’t manifest itself here.