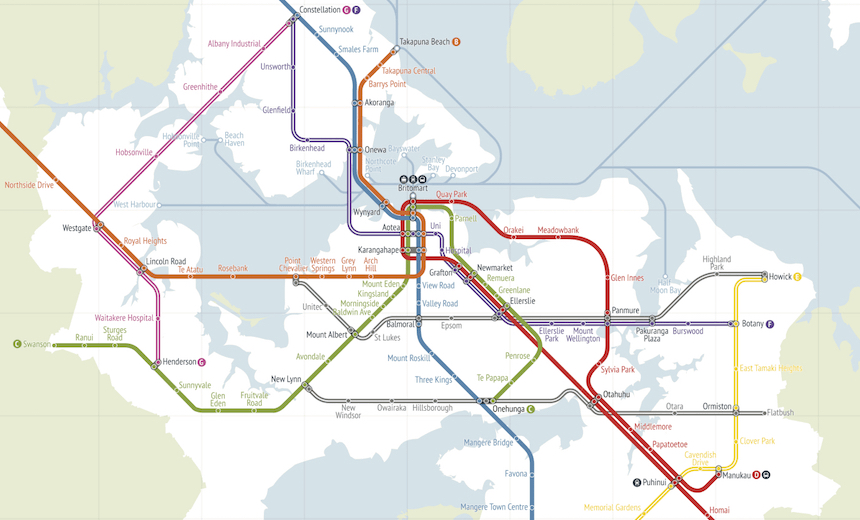 The map that will solve Auckland’s broken transport system

Just when you thought transport planning in Auckland was beyond all hope, here’s a plan to save us all. Or something close to it. Welcome to the Congestion Free Network, version 2.0.

Do you have to be a nerdy traffic analyst to fall in love with a map? Probably. I like to think I’m not one of them, so my attitude to the proposed new map of rapid transit in Auckland is limited to, you know, a deep warm fuzzy glow. Maybe later I’ll do a bunch of emoji thumbs up and smiley faces. Do I like it? You bet I do.

Welcome to the Congestion Free Network (CFN), a dream for Auckland that – I really mean this – has every chance of becoming a reality. Not right now, and not with current transport policies. But it’s pretty clear they won’t last. (I’ll come back to why that is below.)

So: Te Atatu to Takapuna Beach by train. Henderson to the airport with one change. Orewa to the airport with no changes at all. The Western Line to the city with no stupid dead-end stop at Newmarket. Botany to Birkenhead; Howick to Pt Chevalier. Everywhere on one route to anywhere on another, with 11 major interchange stations, three of them underground on the City Rail Link. Smells like city spirit to me.

The CFN has been produced by Greater Auckland, the research and lobby group that used to be known as the Transport Blog. It’s actually version 2.0, an updated and rethought version of the first CFN, produced in 2013. Why a new one? Because the old one was so successful, Auckland Transport and the New Zealand Transport Agency quietly incorporated many of its ideas into the plans we have now, although they are progressing them way more slowly than anyone hoped. And because we now know more about the likely impact of growth in Auckland. The Unitary Plan requires an up-to-date transport plan. Greater Auckland offer theirs.

What about this? Key features of the new plan

At its heart CFN 2.0 proposes a simple idea: let’s put two major light rail lines right through the city, from north to south and west to north, build a harbour crossing to carry them, and upgrade all the other rapid transit lines to and from other parts of the city.

Four key elements are in play to make it all work in the city centre: the CRL; light rail up Queen St; making Wellesley St the main crosstown bus corridor; and creating residual bus routes on Albert St and/or Customs St.

There’s no timetable for the plan and it’s not set out in stages. The argument is that the need is there for all of this, so let’s start. All of the projects designated as rapid bus can be upgraded later to light rail.

CFN 2.0 demonstrates the value of the City Rail Link in many ways. Double the number of trains will be able to travel into town. The Western Line won’t have that silly dead-end stop at Newmarket, but after Mt Eden will head for Karangahape Rd, then through the CRL and out to Parnell and Newmarket. The Southern Line, once it gets to Newmarket, will also change course, heading for Grafton, then K Rd before going through the CRL and becoming the Eastern Line. (Or, if you prefer, the Eastern Line will come into town and  through the CRL before heading on out as the Southern Line.)

What will it cost?

A lot, right? Yes it is, but it’s a couple of decades’ worth of spending and it’s only a third of the $38 billion the government and council have agreed to spend (see last year’s agreement called ATAP – the Auckland Transport Alignment Project). They don’t even know how they will fund all the ATAP plans.

Why is the Congestion Free Network so much cheaper? Because it’s all about rapid transit: the electric trains we have now (heavy rail), light rail (trams), and buses travelling with priority status on dedicated bus lanes and busways. Roads for private vehicles don’t get a look in.

Of those, the harbour crossing is massively cheaper than the government’s preference for tunnels that prioritise roading: they could cost as much as $6 billion. Light rail on the Shore and to the airport are both cheaper than the near-completed Waterview motorway tunnels ($1.4 billion). The new North-western line is cheaper than the proposed East-West highway from Penrose to Onehunga ($1.85 billion), the appalling folly of which you can read about here.

The Congestion Free Network isn’t a pipedream. It’s a serious proposal that has a very good chance of being implemented.  Why? Because:

1. The congestion that blights our roads is now almost universally recognised as unacceptable. But that’s the easy bit.

2. It’s becoming understood among policy makers that the solution relies, not on creating more road capacity, but on a concerted effort to reduce the number of private vehicles on the roads. Though not all policy makers, not yet at least. The government says, “We’re attacking the problem in every way,” which sounds reasonable. But it’s not. It enables a busy road-building programme to continue while providing a smokescreen for its refusal to prioritise rapid transit.

3. The public has embraced change. Not building more roads for private vehicles might seem counter-intuitive to anyone stuck in traffic, but it makes perfect sense to commuters who now use the trains and the Northern Busway. Such is Auckland’s embrace of public transport that it’s fast approaching capacity: more is desperately needed. At peak times the trains are standing-room-only full. Over half of all commuters on the harbour bridge are on a bus. Other commuter buses are busier than they have ever been. Biking is on the rise. The city that would not get out of its cars is doing exactly that, and those still in them should be thankful: those public transport commuters are the only reason the roads have not ground to a complete halt already.

4. You can’t just add buses. There aren’t enough streets to carry them, there isn’t enough space for them when they get to town and they’re polluting.

5. Even Auckland Transport has embraced change. It was AT that introduced former mayor Len Brown to the value of light rail and they continue to advocate for it strongly. The council itself now seems pretty keen.

6. The government will lose Auckland unless it wakes up.

Congestion is not caused by rapid population growth, immigration, the 800 new cars in Auckland every week, a buoyant economy that sees lots of people driving to work or any other such factors. It’s caused by the inability of current transport policies to deal with growth. Some of the blame belongs to Auckland Transport. Some of it belongs to Auckland Council, which is supposed to control Auckland Transport but doesn’t.

But most of it belongs to the government, because when it comes to railways, motorways and other big transport projects it’s the government that controls the money (and controls how the council can raise money) and decides what to do. That’s prime minister Bill English, finance minister Steven Joyce, Transport minister Simon Bridges; and the relevant government agencies, the NZTA and the MOT.

The government says it has the problem under control. But that’s what governments always say about everything. It’s nonsense and every Aucklander surely knows it. They now face a stark choice. They could double down on the policies that are failing, by widening more motorways and slow-tracking the rest. Or they could commit to rapid transit.

Watch this space? You bet. It’s election year and some big announcements for Auckland are coming, in the budget and around it. Is the government smart enough to make them the right ones?

Read more about the Congestion Free Network at Greater Auckland.