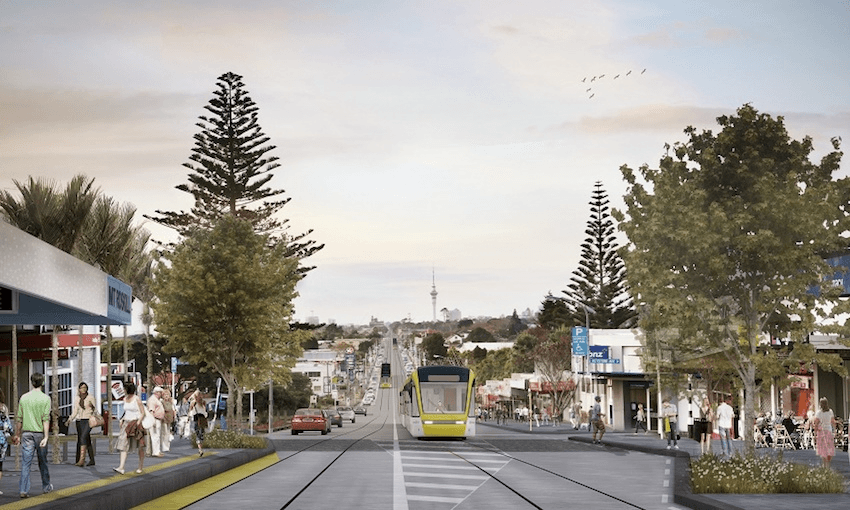 Trams are almost certainly returning to Auckland, backed by the government, the council, and now even the Super Fund eager to invest. But is it really the answer to the city’s transport challenges, asks former National Party cabinet minister Wayne Mapp

There are four key elements in the government’s new transport plan for Auckland. They include continuation of various roading and motorway projects, an expansion of buses, and some increase in rail. But the big new ticket item is a new tram network at a cost of $6 billion. Only $1.8 billion is provided for in the plan, but the New Zealand Superannuation Fund has already offered up the balance of $4.2 billion.

I know it is officially called light rail, but it is really the same kind of tram network as exists in Melbourne that many of us are very familiar with. It will be paid for by existing transport funds and a new regional fuel tax that after GST will be around 12 cents. That is on top of the new 12 cent nationwide fuel tax, a fair bit of which (probably 40%) will also be used for the Auckland transport plan. And of course the New Zealand Superannuation Fund looks like it will come to the party.

The new tram network is the most controversial aspect of the plan. The first part will run from Queen Street, along Dominion Road and to the airport. It has its detractors. Mike Lee – a former member of the Alliance Party and hardly an opponent of public transport – said trams are fundamentally the wrong choice for Auckland. He argues rail and buses are a better solution.

There is sound logic in his thinking. Auckland used to have an extensive tram network from 1902 to 1956. They were replaced by trolley buses using the same overhead wires – the reason being that the fixed tramlines were too much of an impediment to traffic. So will trams work today, when traffic is many times heavier than in 1956? Well, only if cars are virtually banned from the roads that have the tramlines.

I have used trams many times in Melbourne. The service is extensive and wait times are short. But there are big differences to Auckland. Melbourne’s roads are much wider than Auckland’s. The city is essentially flat, and organised on a circular basis. There are none of the isthmus problems that bedevil transport planning in Auckland.

Is Mike Lee right? Are trains a better solution?

His proposal is that rail to the airport through Puhinui would be a cheaper and more effective solution. Well, that would be true if going to the airport was the sole objective. To be fair to the proponents of the trams, their primary purpose is to service commuter traffic, not to service the airport.

There are other rail projects that are within the transport plan. The government and council have committed to extending suburban rail, using electric units, to Pukekohe. With the growth in south Auckland that should be extended. The whole line to Hamilton should be electrified. Is there a case for a rail line from Manukau to Otara and East Tamaki?

The suburban rail service to the west could also be extended to Kumeu and Helensville. Over the next decade there will be as many as an extra 100,000 people living in the wider west Auckland area. The proposed busway along the North West motorway can be designed so that it can link up with rail in Avondale. Rather than having trams it might be a second rail line to the northwest.

The North Shore is also a prime candidate for rail. A rail tunnel under the Waitemata would be vastly cheaper than a road tunnel. The Northern Busway was always planned with suburban rail in mind. A rail line from the city to Albany would make urban intensification along the route, and especially in Albany, much more attractive.

Governments always get to set their priorities. Clearly trams are a priority for this government. It is highly unlikely they will be dissuaded from carrying out their plan. In the next two and half years they will be able to design and let the first contracts for the trams, at least for the line along Dominion road. That necessarily means down Queen St to the Wynard Quarter. If they get re-elected in 2020 the first stage of the project will be locked in. Probably also the second stage along the north-west corridor.

If the New Zealand Superannuation Fund actually funds the project, this timetable will be accelerated. In that case the trams, at least the first two lines, are effectively already a done deal. It would be a real coup for the government.

As with many transport proposals, there is no single solution. Doing the Dominion Road tram route does not mean that rail should be neglected. Over the next ten years it should be possible to do more than completing the City Rail Link and extending electrification to Pukekohe. To what extent are the government and the council open to ideas to modify the ten year plan in order to expand the urban rail network?

One aspect of the Auckland plan stands out. There is no new money for motorways over the next ten years. Phil Twyford has a well known aversion to motorway projects. He constantly talks about National’s low value motorway projects. Of course the current contracted projects will be completed, and over the next few years they will be a major part of transport construction in the Auckland region. But I am sure the minister would have stopped them if he could have done so without costing billions in contractual termination costs.

One would have thought the northwestern motorway will need to be extended to Waimauku within the next ten years. It is about 10 kms beyond the current end of the motorway. The sheer scale of the growth in the northwest will make this an obvious priority within the relatively near future.

However, I suspect that motorway extensions will only get funding in the next National led government, rather than from the current government. If the electoral cycle of nine-year governments continues, as has been the case over the last 30 years, that could be as far away as 2026.

In the meantime, there are worthwhile public transport discussions to be held. Is the transport plan a fully locked in, cast iron blueprint that cannot be changed in any material respect? One can only hope that the government and the council will be amenable to adjusting the ten year plan, at least to some extent.

This article was amended on May 10 to clarify the reference to West Auckland growth.