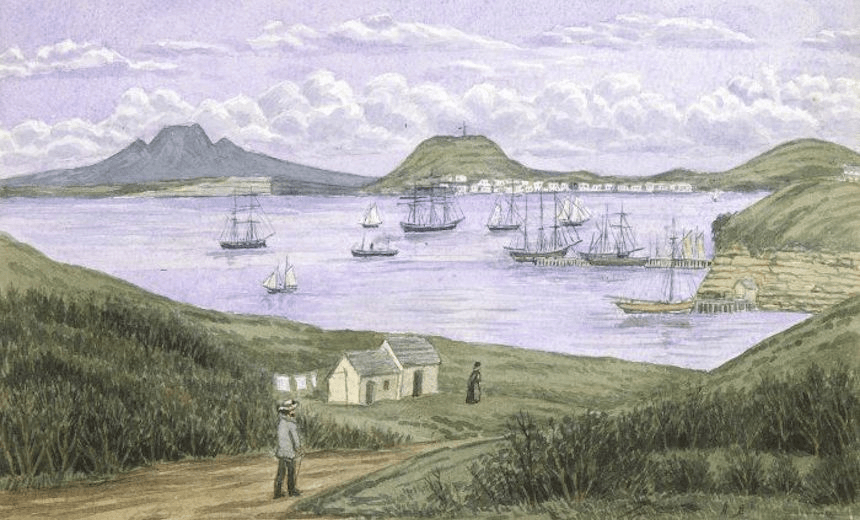 Ngāti Whātua were once guardians of the Port of Auckland shoreline. Give us the chance to buy it back

The Storm in the Port: The story of Auckland’s waterfront is one of environmental degradation and indifference to the interests of iwi, writes Ngāti Whātua Ōrākei deputy chair Ngarimu Blair. Now that the port may be for sale, it’s time to redress the balance in favour of the kaitiaki of Tāmaki Makaurau.

Read other contributions to the Port of Auckland debate here.

Recently Ngāti Whātua Ōrākei announced we are prepared to buy the Port of Auckland. This was in response to media articles about the incumbent mayor contemplating selling at least the port business, if not the land. As we have done with all recent mayors, we reminded Phil Goff that “if you are selling the port, we will buy it”.

Why would Ngāti Whātua Ōrākei want to buy the port? Because as kaitiaki of Tāmaki Makaurau, we will look after the port and the Waitematā, nurture it and enhance it over the long term.

We are committed and able to put together a consortium – which could include the NZ Super Fund and other iwi – that would allow us to achieve our goal while also releasing much-needed capital to continue to develop our great city.

While discussions are still at an early stage, options could include downsizing the existing port, which would free up land for sale or lease for other more productive uses, or moving the port closer to the Waikato food bowl.

To understand Ngāti Whātua Ōrākei’s position, it’s worth taking a step back in time.

In 1840 it was our ancestor Te Kawau who invited Governor Hobson to establish his new capital on the shores of the Waitematā. My great grandfather’s great grandfather, Te Reweti, led the deputation to Kororāreka to put the offer. This was only months after both he and Te Kawau signed the Treaty at Manukau and just before a land deed was signed too at Te Rerenga Oraiti (Point Britomart) transferring 3,500 acres of central Auckland land to the Crown. The coastline from Opou (Cox’s Bay) to Mataharehare (West Hobson Bay) was the seaward boundary while both points went inland to the summit of Maungawhau.

We considered this transaction as a gift in which we gave use rights – and we still take that view. The settlers acquired for a pittance what has become some of the country’s most prime real estate. In 2012, we settled our claim over this and the rest of central Auckland for $16 million.

Nevertheless, with respect to our rangatiratanga over the inner Waitematā and our former fishing and shellfish grounds, there is no 19th century document showing any transfer. The Crown cannot produce one because there isn’t one. That is one of the reasons we submitted to the 2004 Seabed Foreshore Act and, in recent weeks, have lodged documents under the Marine and Coastal Area (Takutai Moana) Act 2011 to have our ‘customary interests’ recognised. However, we are realistic about our rights being recognised as it is impossible for us to demonstrate ongoing and exclusive use of our former coastline. There is that red fence along Quay Street for a start!

The fact is, since the 1850s successive Provincial Governments and Auckland Harbour Boards have progressively reclaimed the inner Waitematā and parts of the Manukau without any reference to the interests of Ngāti Whātua Ōrākei. The reclamations have marched from Oka (Point Erin) as far as Taurarua (Mechanics Bay). Headland Pa sites Te To (St Mary’s Bay Point) and Te Rerenga Oraiti (Point Britomart) were destroyed by pick axe and mules and used to fill in the sandy bays such as Waiatarau (Victoria Park), Horotiu (Officials Bay) and Te Toangaroa (Beach Road and Quay Park). Shellfish grounds such as Te Rou Kai (Britomart) and fishing villages at Waipapa (Parnell Rise junction) are now just memories.

However, Ngāti Whātua Ōrākei have never been ones to sit back and wait for benevolent governments to heal our sense of injustice. We’ve always taken an innovative approach to recovering our former homelands. In 1996, when the Crown embarked on the sale of its railways portfolio, we asked the minister to sell us the Auckland rail land and we were prepared to pay market rates. He said yes, and today there is 20 hectares of mixed use development and community facilities such as the Spark Arena for which we gave a 50 percent discount on the ground rent to make it work. This year we embark on a major urban design review of the area and, of course, the mayor has expressed interest in our land being the home for a new national stadium. We are participating in this process and want the best for the city and ourselves as we strive to make that part of the CBD contribute even more to the vibrancy and life of Tāmaki Makaurau.

We believe our land should be looked at in conjunction with the port’s future as they work to address their short and medium term capacity needs.

Ultimately, like most Aucklanders, we believe the port is incompatible with a well-functioning and attractive CBD on one of the most stunning harbour settings anywhere in the world. We believe there are viable options over the next 30 years for the port to downsize and ultimately move to another location of which there are two proposed in the Port Future Study.

However, this study is hampered by the lack of a national ports strategy. We intend to work with other partners over the coming months to bring ideas to the fore on how to achieve a suitable outcome which will also create greater economic benefits for the wider region and beyond, including the Hauraki, Waikato, Tauranga Moana and Tai Tokerau districts.

In the long run, our aim is to secure a future where all of our grandchildren and their children will be able to reconnect with the full length of the Waitematā – from Oka in the west to Taurarua in the east.

Read other contributions to the Port of Auckland debate here.