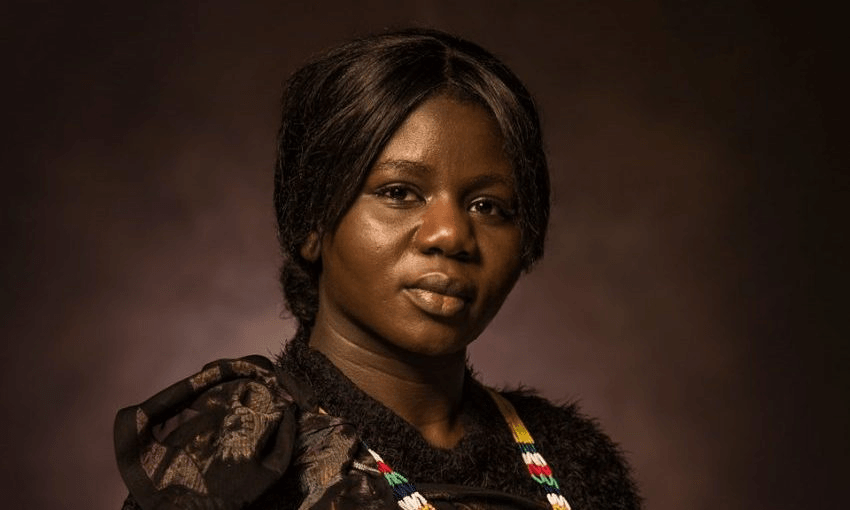 The Resettlement Portraits concludes at the Auckland Central Library on June 20 at 8pm. © Nando Azevedo

Why these resettlement portraits meant so much to me, a blind immigrant

The Resettlement Portraits concludes at the Auckland Central Library on June 20 at 8pm. © Nando Azevedo

This World Refugee Day, and always, I hope the portraits and voices of our resettled community in Aotearoa can guide us in our efforts to ensure they feel valued, writes Áine Kelly-Costello.

What is cultural pride? It is not pretending that any culture is perfect, or making comparisons between cultures to argue that one is above another. It is about being able to claim and celebrate the cultural part of your identity – a part that probably feels suppressed when you have had to recreate your life in a new country halfway around the world.

I was reflecting on all this while perched on the edge of the sofa in Auckland City Library one afternoon this week, having been moved by an exhibition I’ll tell you about in a moment. A handful of children scampered happily and freely around the child-sized treehouse to my left.

I hadn’t given it much thought before, but now I realised the cultural pride concept resonated with me. It wasn’t because I lived in Ireland and Canada before my family settled in New Zealand. Rather, it struck a chord because I connected with another kind of pride: the disability pride movement. I’m blind. And I wouldn’t say that I’m proud of the fact of my being blind; it just “is”. Or rather, what being blind “is” boils down to an inextricably ingrained part of my identity that I find it healthy to embrace.

But it’s difficult to lay claim to any sort of disability-related identity when disabled and deaf people are expected to interpret assurances that we “don’t seem disabled” as a compliment. In a related vein, if you are a former refugee or asylum seeker, it is surely very trying indeed to hang onto those identity-shaping aspects of your home culture that find limited means of expression here in New Zealand.

But finding such an outlet for expressing that cultural identity is precisely what photographer Nando Azevedo from the Auckland Resettled Community Coalition (ARCC) is interested in. Around the walls of a carpeted room on the second floor of Auckland City Library hang the 27 photographs comprising the Resettlement Portraits exhibition, which Nando has photographed and curated, taken with this specific aim in mind.

“We wanted the portraits to be a celebration of culture and also of family. The families I photographed each received a copy of their family portrait because it was about helping them to regain that pride,” he explains.

I’ve just arrived at the library and we are standing inside the doorway of the exhibit room as Nando speaks. We ease our way gradually left till we are facing someone. “Yohanna is one of two sisters from Eritrea. She is wearing a white, strapless dress with red and gold detail. And also a golden pendant and golden earrings.”

“So her dress and jewellery are Eritrean?”

“Yes. We asked everyone to bring or wear something that gave them pride in their culture.”

They did. A Burmese man holds a gun he made himself. His is a hunting culture. Nuang, from the Zomi minority also in Burma, sports an animal-skin drum. “It’s used for communication between the villages and in celebrations,” Nando tells me.

Issa, a Palestinian grandfather, proudly displays his country’s flag. Abann from the Shilluk culture of South Sudan holds a wooden cane; Abann is well-respected here in Auckland too, as manager of the ARCC.

“Resettled communities,” Nando explains, “include former refugees, asylum seekers and arrivals from family reunification. ARCC is an umbrella organisation for the different ethnic groups within the community.”

I had originally come across the exhibition event on ARCC’s Facebook page. I asked whether there were any audio/guided tours through the exhibition. There were not, but there was a booklet with some information about the portraits.

When Nando saw my query and offered to show me around, I was grateful, but not solely because I would get to learn about the exhibition in the most meaningful way possible – from the photographer himself. I was also grateful that he didn’t ignore my query on the presumption that it was not worth attempting to make photography accessible to a blind person. To tease out where this thinking might come from, if you can’t see, you can forget about having a spontaneous reaction to a photo. Further, if you’ve never been able to see, some of the elements that make a photo interesting are more intellectual than visual, given that they are hard to actually picture – colours, for example.

But the more we explored the portraits together through words, the more I understood why these apparently limiting factors are largely superficial. It’s not just the immediacy of the images that grabs people, but the reasons behind that immediacy. And Nando could articulate plenty of those reasons, and even some titbits of the former refugees’ stories, to expand my mental map.

“Zhiyan is Kurdish. She came to New Zealand when she was 9 or 10, and now she has a PhD in psychology. She’s wearing a shiny red dress with ruby-like stones, and a small, fancy hat towards the back of her head. She’s the only one who didn’t look into the camera for the shot. Everyone else is doing that, and it gives you the sense that they are looking at you, and that their eyes are following you as you walk around the room. But Zhyan’s is different. She is looking into the distance, very proud … very powerful.”

As we wend our way around the room, I am struck by the breadth of emotion captured in everyone’s faces. Between them, they look, in Nando’s estimation, serene, sorrowful, fierce, curious, slightly smiling, cheeky, sad, serious, proud, neutral, and sceptical. Most of them a combination of two or three.

We shuffle a couple more steps to the right. By now, I’ve been given a small but illuminating window into the cultural identities of about 20 of the people photographed. Nando has done well at capturing a range of ages and a gender balance. Now we are facing the portrait of Nour, the five-year-old granddaughter of Issa, the Palestinian grandfather proudly holding his country’s flag. “She has a flower in her hair.” Nando pauses. “She looks serious – way too serious for a kid.”

Afterwards I sat on the sofa by the treehouse waiting for a lift home. I was surrounded by the pure delight of children at play, and I wondered whether Nour would feel unburdened and safe enough to do the same. This World Refugee Day, and always, I hope the portraits and voices of our resettled community in Aotearoa can guide us in our efforts to ensure that they do, in fact, feel resettled and valued here.

The Resettlement Portraits exhibition wraps up on World Refugee Day (June 20th) with resettled community members coming together at the library and performing cultural presentations. After that it is still uncertain what will happen to the images as the ARCC is making efforts to find them a new home in Auckland and beyond. For more information or to get in touch, visit the organisation’s website at www.arcc.org.nz

Áine Kelly-Costello is a campaigner, musician, language lover and blogger.