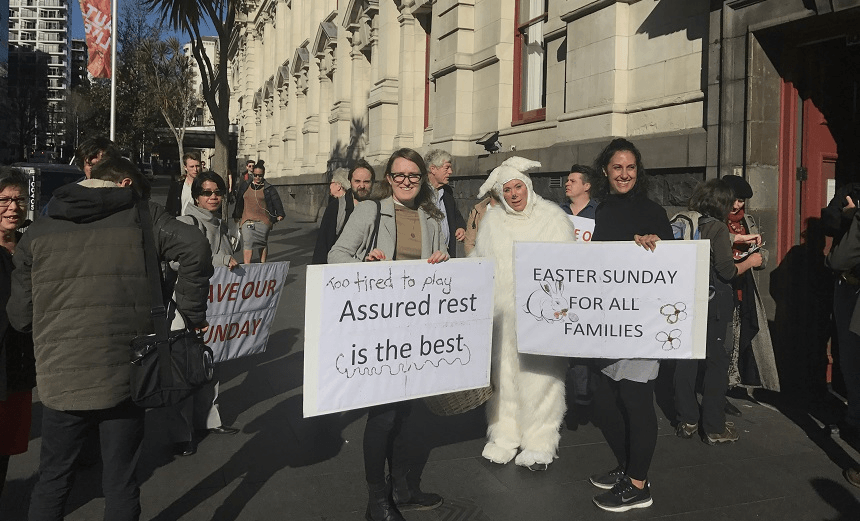 The vote was 20-1, almost everyone joining hands around the table with Cr Efeso Collins to reject trading in Auckland on Easter Sunday. So to speak. The Easter Bunny was there and so was Simon Wilson.

Efeso Collins, a councillor from the Manukau ward, said: “I want to tell you a personal story. It’s a story about what will happen in my family next Easter Sunday. We will gather around the table at breakfast time, because we are family that can afford our Weet-Bix, and we will hold hands. My daughter will say the prayer. She will say, ‘Thank you Lord for this family time, and thank you that I can chill out.’ Because although the tradition is an old one the language moves with the times. She will say, ‘Thank you that I can chill out with Mum and Daddyo.’ We will go to church, and then we will share the to’ona’i, which is a lovely big lunch that we will all eat together. We might go to the park in Otahuhu or Starling Park in Ranui, but that’s what we’ll do.”

He talked some more about faith and family and then he said, “In our community, it’s about hope, it’s about a new beginning, it’s about opening the only door that should be opened on that day … to give our families a breather, to give our people the opportunity for worship, for family time and to have some rest.”

He was speaking last in the council debate, because he had moved the motion to preserve the status quo. He finished up, “And I want to thank all those who have supported this.”

“All those” included every other councillor (and they were all there) except Orakei’s Desley Simpson. And the status quo they supported is not a ban on Easter Sunday trading, but a ban riddled with inconsistencies. You can shop in Parnell but not next door in Newmarket, nor in Ponsonby, the suburb which years ago stripped Parnell of its mantle as the city’s leading hospitality/shopping mecca for tourists. You can buy plants at the garden store but you can’t go to the hardware store for a spade to plant them. There’s more.

The council wasn’t interested in ironing out the anomalies. That’s in the way-too-hard shopping trolley. But they were interested in preserving the holiday status of Easter Sunday, and not just for religious reasons.

They had received a petition from the First Union, which turned up to the council meeting with the Easter Bunny, who cracked jokes and handed out Easter eggs to the public. The union wanted to keep the holiday. They had also received an impassioned plea from Heart of the City, which wanted to open the day for trading.

Mayor Phil Goff said that during his former career in parliament he’d taken part in 11 debates on this topic. “I’m in favour of preserving the 3½ days we don’t have commercialised. I do it because it’s a special time of the year for me and my family. That is a time when we can escape commercialisation … Is it fair for us to allow retail workers to be compelled to give up that special time of the year? … I’m also mindful that many workers come from the Maori and Pasifika communities and for them, these days have strong religious and family connotations.”

Most of the councillors spoke. Cr Daniel Newman from Manurewa said, “I’m clear that Easter Sunday should be a day of religious observance for those of us who recognise the resurrection and a day of rest for all.”

“Normally,” he said, “I would be philosophically in support of free association, but I’m a Catholic and religious observance is primary. Those people wanting a change are pushing a narrow world view. I think there needs to be a clear signal that there is a broad consensus on this.”

Cr John Watson from Albany said, “People might not necessarily be going to church but there is a spiritual dimension to this.” He also said he was voting for “the preservation of family life” and against “the erosion of workers’ rights”. Also, he said, Japan has 17 public holidays.

Cr Richard Hills of Glenfield said, “I am not religious but I respect the reason for Easter. My main reason is to have some time with family and to have some time to enjoy the awesomeness of Auckland outside a mall.”

He had worked in hospitality and retail, “as a manager as well”, and “I know how hard it is for young people to say no, I don’t want to work that weekend”.

Cr Christine Fletcher of Eden-Albert said, “We throw away our history at our peril.” She referred to city’s bicultural and multicultural but in particular, she said, “it can be awkward to discuss Christian values”.

Fletcher also said it was “absolutely unacceptable that parliament has dumped this on us” – referring to the decision of parliament to allow local bodies to make their own regulations about Easter trading. Fletcher moved an amendment that council should complain to the government, which was opposed by the councillors who belong to the National Party and a couple of others, but eventually passed 14-7.

Waitakere councillor Linda Cooper, one of those National Party members, wondered aloud about a compromise: “Is there an option to investigate a radius for cruise ship operations, Parnell and the CBD?” There was, they could make any regulation they wanted, but she did not propose one.

Cr Denise Lee of Maungakiekie, who is a National candidate for parliament, said, “Some people might like an extra day’s pay.” But, she added, council research had shown there would be a “minimal contribution to the Auckland economy as a whole.” And not much to the shops that opened, either, because the current spending hikes on Easter Saturday and Monday would even out over the whole long weekend.

Although she said, “I agree [with Cooper] we should have the courage to make partial geographic decision-making,” she did not propose anything courageous herself.

She also revealed that one of the business associations in her ward had surveyed its members, mostly small retailers, and found that “90% of them wanted to retain the status quo”.

The council research quoted two surveys, one a “demographically representative” poll that found 55% of people in favour of liberalisation, the other an opt-in “public engagement survey” in which 68% of respondents preferred no change.

Cr Sharon Stewart of Howick also preferred no change. She said, echoing something Goff had said: “If we decide to do away with Easter, then I think you’re right, Christmas is next.”

Cr Ross Clow of the Whau, said, “There’s got to be at least one agnostic around the table.” He was opposed to liberalising the rules because that would encourage “rampant consumerism”.

As for Cr Desley Simpson of Orakei, she made her case with principled advocacy, saying clearly what she thought, but it was obvious she did not expect to persuade anyone.

“I’m not saying Easter trading is right for every part of Auckland,” she said, but the current rules were “archaic”. She talked about wanting “to promote business and to promote our visitor strategy”. She said those who had to work could have days in lieu.

“And why, when we have an obvious request from Heart of the City, do we say no? Why Parnell, which no one seems to understand, but not Newmarket?” She called the status quo “unfair” and suggested the council “should allow trading on Easter Sunday where there are high volumes of retail request”.

Efeso Collins carried the day, but not because the council has gone all religious. The consensus was that changing the rules meant a lot to the people it would hurt, whereas only a few would genuinely be helped and it makes very little difference to everyone else. The councillors voted by voice, one by one, and all of them voted proudly. Very clearly they believed they were doing a decent thing.

When they’d finished, Maxine Gay of First Union, standing in for the Easter Bunny who had by that stage scampered off somewhere, went round and gave them all Easter eggs.

“I suppose it’s not treating, because you’re doing it after the vote,” said Phil Goff.