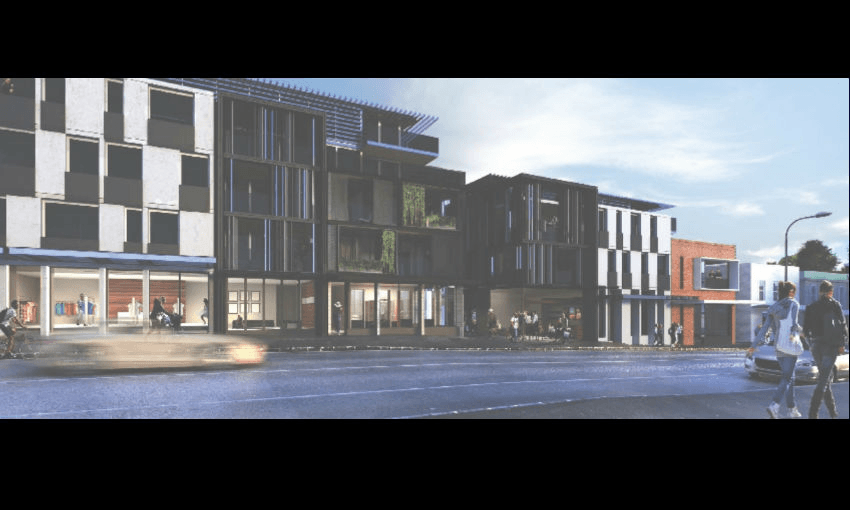 Artist’s impression of the proposed apartment development at the corner of Dominion Road and Valley Road, Auckland (supplied)

Artist’s impression of the proposed apartment development at the corner of Dominion Road and Valley Road, Auckland (supplied)

The objections of a few wealthy Mt Eden residents have succeeded in killing a much-needed central Auckland housing development. How does this keep happening?

Dominion Road has been marked for major transformation with over a billion dollars to be invested in high capacity light rail that will traverse the length of Auckland’s most famous street. To take advantage of this transformation and to assist in the rejuvenation of this somewhat rundown area Auckland Council’s development arm Panuku had planned to develop 102 apartment units in four to five storey buildings in the Valley Road centre.

Remarkably a panel of independent commissioners has just refused resource consent for this much needed housing development citing the scale and intensity of the development as being out of character with the surrounding neighbourhood.

Panuku was established by Auckland Council to promote urban redevelopment, with the aim of rejuvenating neglected areas while accommodating the city’s rapid growth. Panuku identified a redevelopment opportunity on a large council-owned site cornering Dominion and Valley Roads. They planned to build 102 apartments in four buildings. The buildings would generally be four storeys along the site boundaries, though two of the buildings would have a fifth storey setback towards the centre of the site. Resource consent was lodged and hearings were held to hear objections.

A number of nearby residents objected to the development. One was the late prime minister David Lange’s brother, Peter. He raised concerns about the effect the development would have on “amenity”. The resource consent decision report describes the impact homes for other people to live in would have on Peter Lange:

“He described the pleasure of sitting in his front bedroom or balcony and enjoying ‘the sunsets across the silhouetted parapets of the Edwardian shop fronts, to the Waitakeres beyond.’ He considered the imposition of a five storey building would seriously compromise this amenity.”

Another issue raised by objectors was the effect of the development on heritage. The development would involve the demolition of a single post-war modified building which the council’s heritage specialist Rebecca Fogel described not as a character building itself, but “character supporting”. Fogel stated that this building makes a “moderate contribution to the street” and therefore should not be demolished, but said there was no reason that Panuku couldn’t incorporate the building into the development. However, Panuku objected, saying that keeping the building would be unworkable and would require considerable spending on seismic upgrading.

The hearing commissioners ultimately refused the application for the Dominion Road development. They provided the following reasoning:

“The excess height and associated bulk and form of the proposal will result in adverse visual, shading and dominance effects on the character and amenity of the surrounding neighbourhood….

“While the proposed mixed use development will provide many positive benefits including additional housing opportunities on a major transport route and new retail opportunities in the Eden Valley local business centre, the adverse effects of the proposal, particularly the bulk, dominance and shading and the loss of the Universal Buildings will mean that any social and economic wellbeing benefits to the community that could arise from the proposal would be outweighed by its dis-benefits.”

The commissioners provided a superficial analysis that leaned heavily on the fact that development would breach some of the rules of the Unitary Plan. This is a somewhat circular argument considering that nearly all resource consent applications involve breaches of planning rules. Decision makers are supposed to assess applications based on their tangible effects on the environment, not on their effect on the planning rules themselves.

It is true that the Unitary Plan does provide relatively low intensity zoning in this area. But this zoning was largely the result of an arbitrary political process which pushed high intensity zoning to outer suburbs to ensure that the wealthy citizens of the leafy inner burbs wouldn’t have to endure people living near them. The resulting zoning pattern forms a donut of density in outer suburbs contra to the compact city principles of the Auckland Plan and Unitary Plan.

The commissioners barely mention the Dominion Road development’s contribution to housing. They make no mention of the transformation light rail will bring to the area. They make no mention of Auckland’s rapid growth, and barely mention the higher level objectives of the Unitary Plan which was originally premised on limiting sprawl and growing the city through intensification of centres and public transport corridors. They even went so far as to be dismissive of the applicants for mentioning these higher level objectives:

“We consider that the applicant’s experts have placed too high a reliance on the higher level RPS (Regional Policy Statement) urban growth and form objectives and policies of the AUP (Auckland Unitary Plan)”.

Even more remarkably the commissioners refused to consider the likely future changes in the surrounding area when deciding what forms part of the background, or “receiving environment”, for which to measure “adverse effects” against:

“We have therefore adopted a precautionary approach in our consideration of the evidence in this regard, and apply our discretion not to adopt possible future building forms as a primary mitigation feature for the mitigation of adverse effects”

The refusal of resource consent for this development is a decision that places the preservation of the existing form of this area as a value that overrides all else.

The planning system is broken

We have a housing crisis because a generation of boomers think stopping homes from being built is as righteous now as stopping apartheid was in the 80s.

We have a housing crisis because zoning decisions get made on the basis of which areas have the fewest rich people in them.

We have a housing crisis because the system for approving development places more value in the peaceful ambience of cocktail hour at the Lange household that it does in providing desperately needed homes for people.

Few sites are as well suited to urban intensification as this one on Dominion Road. It is close to the CBD. It is on one of the city’s busiest bus routes. It is about to have hundreds of millions of dollars invested in light rail. If the homes Auckland so desperately needs can’t be built here, then where can they?

And if the current planning system does not allow houses to be built in the places where it makes most sense then the system needs to change. Areas like the Dominion Road corridor need a much broader presumption that they will be developed for intensive housing. If the Labour-led government is to meet its goals of easing the housing shortage and making the most of its investment in light rail then it needs to step in to ensure this can happen.