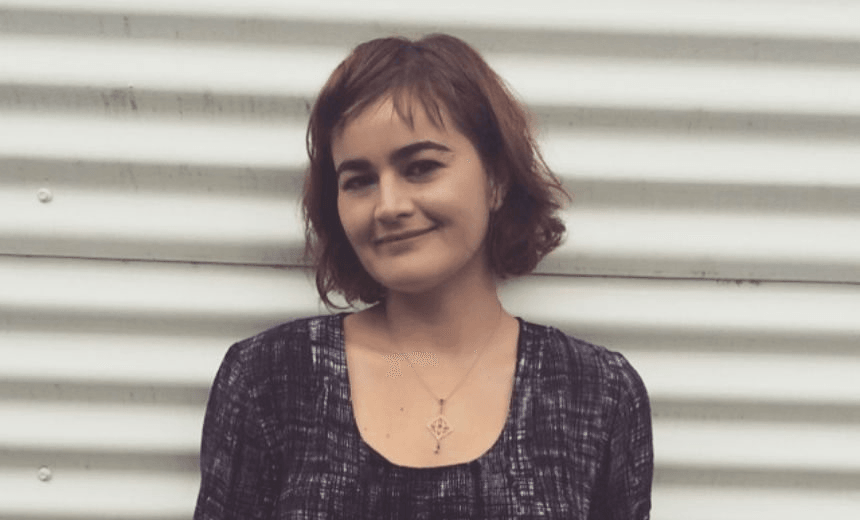 In which the Spinoff Review of Books reveals the New Zealand writer who has won a Major International Prize. It’s Ashleigh Young, but you might have guessed that because her name is in the headline.

Wellington writer Ashleigh Young has won $US165,000 in a major US literary prize.

The author of two critically acclaimed books – Magnificent Moon, a volume of poems, and Can You Tolerate This?, a collection of essays – has been named as one of eight writers around the world to win a Windham-Campbell Prize at Yale University. She will be flown to Yale in September for the award ceremony, and to attend a literary festival featuring keynote speaker Karl Ove Knausgård.

The Spinoff Review of Books emailed her with congratulations and she replied, “THANK YOU OMG OMG OMG OMG OMG OMG”. Then there was a line space, because Young is a highly technical poet, and she added: “OMG”.

So then we called her and she said, “Oh my God!”

When did she hear about the win?

“I actually heard last Thursday. I’m still in a state of shock, and the shock is growing steadily, and accelerating.”

How did she hear about the win?

“I got this email. This email which looked highly dubious. It arrived at 9.18am and was from the director of the prize, which I had never heard of, and he wrote, ‘We’ve got some good news.’ But he spelled my name wrong, and he included the line, ‘It is important I speak to you right away.’ Which immediately put me in mind of Nigeria. A scam. ‘Dear friend,’ you know.

“So I forwarded it to Fergus [Barrowman, publisher at Victoria University Press, where she works as an editor], and said, ‘This sounds like spam, don’t you think?’ And he said, ‘Actually, I think you should give them a call.’

“And so then I was talking to this guy in Yale, Connecticut, and he said, ‘Look, we’ve been reading your book…’, which is the most amazing thing to hear in an American accent,  and he put me on speaker phone, and all these judges were screaming at me: ‘Congratulations!’ And he said the prize was $165,000.”

[We emailed Lauren Cerand, who sent out a press release about the award from New York, and asked if it was American or New Zealand dollars. She replied, “American. According to the exchange rate I have just calculated online, it would equal $229,837.07 in NZ dollars today.”]

Ashleigh Young: “This is not – it’s still completely abstract to me still. I’m not capable of processing in my head that amount of money. The most immediate thing I can think of is that I can buy a table and a chair for my living room so I can write by the window.”

In the weekend she splashed out on a scalp massage, and extended her credit card overdraft to $8500.

Had she applied for the prize?

“No, that’s the thing. It’s entirely secretive. They operate completely underground. The nomination process is highly guarded, and I gather they have advisors in various countries around the world.”

Lauren Cerand’s press release states: “The prize was established in 2013 with a gift from the late Donald Windham in memory of his partner of 40 years, Sandy M Campbell. English language writers from anywhere in the world are eligible. Prize recipients are nominated confidentially and judged anonymously. The call that prize recipients receive from program director Michael Kelleher is the first time that they have learned of their consideration.”

Young was born in Te Kuiti in 1983, and graduated from the phenomenal International Institute of Modern Letters at Victoria University. Along with Eleanor Catton (in 2007) and Hera Lindsay Bird (2011), she won the institute’s annual award for excellence, the Adam Foundation Prize, in 2009, for the manuscript of essays which was subsequently published as Can You Tolerate This? Also in 2009 she won the Landfall essay competition.

Last year she won a runner-up prize at the inaugural Surrey Hotel Steve Braunias Memorial Writers Residency in Association with The Spinoff Award, giving her three nights accommodation at the Surrey Hotel in Grey Lynn, Auckland. She wrote a poem while she was there. She later described the experience of her first ever literary residency.

She also contributed an exclusive essay to the Spinoff last year when she made an iron ruling on the spelling of the word “eh”.

Young will find out next Tuesday whether Can You Tolerate This? has been shortlisted in the non-fiction category at the 2017 Ockham New Zealand Book Awards. The Spinoff Review of Books already knows the entire shortlist, of course, and will announce it at 6am on March 7.

Spinoff Review of Books editor Steve Braunias on the occasion of Ashleigh Young winning a lot of money and being internationally recognised.

A brief note on the obviousness of Ashleigh Young possessing some kind of genius.

I first started reading her in 2011 not long after she began writing her blog Eyelash Roaming. Blogs were a thing back then, and very many operated as tables which the writer would stand upon and express their opinions on contemporary issues in a loud and hectoring voice. But this was different. This was a literary notebook, the writer quietly setting out narratives about her own life, and about the horror of Cosmopolitan magazine and the complexities of bicycling in London, and a whole range of various assorted contemplations. The writing was restrained and careful and funny and measured and there were so many beautifully formed sentences. She was doing something new in New Zealand writing; her essays had an unusual thoughtfulness to them, a working out of things on her mind, never coming to any emphatic conclusion, but always alert to the possibilities, with a lot of hard thinking and a searching honesty about herself. I emailed her to declare: “I love everything you write.”

I first met her two or three years afterwards at a literary festival in Wellington, when we were both appearing onstage as contributors to the Australian journal, the Griffith Review. It was a strange set-up. There were five or six of us and the idea was that we would all sit in the front row, and walk onstage when our name was called; we’d read our work, or about it, then walk back to the front row and sit down again. One or two of the contributors were incredibly boring and it was a drag to have to sit there and listen to them chuntering on as though they owned the place and might never, ever finish. I sat next to Ashleigh. She had written on Eyelash Roaming a few weeks before the event: “I am terrified about having to do this.” It was an understatement. She was so stricken that she had the shakes. She writhed in her seat and made gulping noises. When her name was called out, she let out a low, pained moan, and her ascent up the three steps to the stage was like the conquest of Everest – slow, arduous, agonising. She conquered the first step but tripped on the second and dragged herself over the third. I thought: she seems set to suffer a nervous breakdown live onstage. I thought: is there a doctor in the house? But she took her place behind the microphone, and began talking confidently and lyrically and thrillingly about an essay she had written on hikkimori, who she describes in Can You Tolerate This? as “a young Japanese person, usually a man, who has shut himself into a bedroom or a flat for six months or more, sometimes years, sometimes decades.” It would be banal to say that she identified with these unfortunate and extreme creatures but she did make a connection, at least, and confessed in intimate detail about how she used to hide in a kind of crawlspace at her college in Te Kuiti. It was one of the greatest speeches I’ve ever heard at a literary event or anywhere; every word of it was spellbinding. I thought: well, there you have it, I’m in the presence of genius.

Can You Tolerate This? (Victoria University Press, $30) by Ashleigh Young is available at Unity Books.