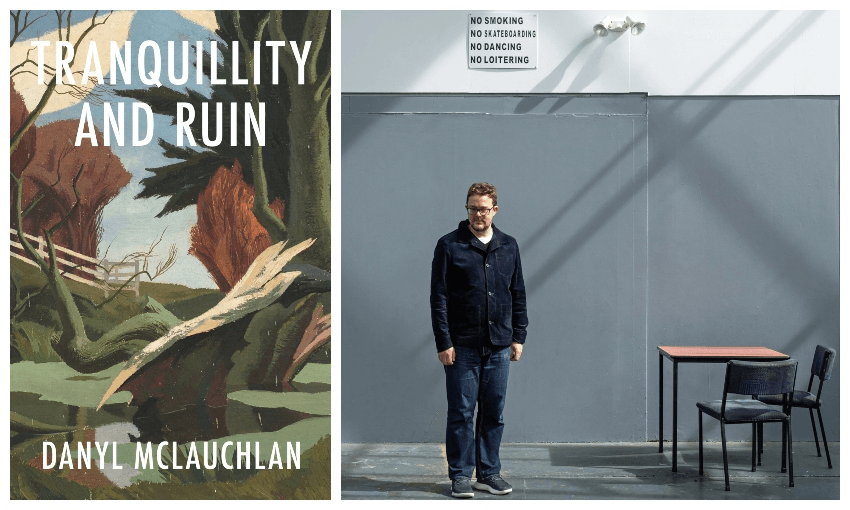 Tranquillity and Ruin: An essay collection to focus the mind

Alie Benge abandons all attempts to pin down a beautiful, brainy book by Danyl McLauchlan.

As I sat down with Tranquillity and Ruin in the work lunch room, I wondered what I’d say if someone asked what I was reading. I could say it was a book about existence and meditation, but that’s not quite right. Maybe about mood disorders and trying to feel better, or how to be good, how to be conscious, how to live a moral life. Maybe it’s about trying to hack suffering – how to find its source and pluck it out like a splinter. But none of those quite get to the heart of what this book is.

Danyl McLauchlan, a contributing writer at The Spinoff, asks the same question in the foreword, and claims it’s about uncertainty, but any good English student knows authors can’t always be trusted to tell us what their book is about. Uncertainty is there as the thread carrying the narrator through each essay. This is a book of questions, and his uncertainty pushes his questions deeper. It seems like the motivation for the book, but perhaps not what the book is. Whatever – it slaps.

We open with the author, racked by insomnia, chasing a hallucination through the streets at 3am and subsequently starting a course of SSRIs. This comes, he tells us, after five years of depressive episodes that seem to have no cause. So this deeply rational scientist starts meditating and is frustrated to find that what seems like new age woo, actually works. The first essay, Arise and Pass Away, narrates his journey into meditation as he tries to understand how exactly it works. The second, The Valley and the Stream (he does a good title) takes place at a silent meditation retreat. By this time he’s much further along in his practice and is hearing humming, seeing greenish pulsing light, and accessing jhanas. These two essays cover similar ground but are wonderful stand-alone pieces: in Arise and Pass Away there’s a charming embarrassment about his meditation practice, which is replaced by curiosity and wonder in The Valley and the Stream.

McLauchlan writes at the intersection of neuroscience and spirituality, stripping away the mysticism of meditation, despite experiencing things that would generally be thought of as spiritual. He is a hard-line rationalist and doesn’t entertain the idea that there’s anything truly spiritual in the experiences many have while meditating. However, he acknowledges and respects the importance of spirituality for individuals, and for community cohesion, and all of this without the sniffiness that has become common in this type of writing.

He reads neuroscience papers, books on secular Buddhism, and Martin Heidegger’s 1927 opus Being and Time, all as a way of getting to a macro-level understanding of what we are and how we work. What is consciousness, what is being, what does it mean that we’re alive, how does perception work? He takes the lessons of the first essay about the nature of consciousness, and goes further, trying to understand the mechanics of mood disorders. He describes a feeling of happiness as “the brain’s way of rewarding the subminds for accurate predictions”. There’s a stark nihilism in his findings that, despite the author’s best intentions, had me reaching out for something spiritual to give some meaning to the hallucination that is apparently our reality, something to keep the machine warm.

That all sounds very dark and forbidding, but McLauchlan brings a lightness to the subject. He lays out complex ideas and makes them digestible, contained enough to hold in your hand. At just the right moment, he steps back from his ruminations to return to the scene at hand. He strikes this balance perfectly so that one minute I was frowning in concentration, the next laughing out loud.

The style is reminiscent of Bill Bryson, but Bryson I can put down one day and forget to go back to it. With Tranquillity and Ruin, I was counting down the hours till I could get back to it, and wondering if I could sneakily read at my desk. There aren’t many writers who could argue that the self doesn’t exist, and make it a page turner.

The third essay, The Child and the Open Sea, is set at a retreat for effective altruists that sounded like zero fun. Effective altruists are a community of people seeking the most effective way to do good for the most amount of people. The movement started in response to Peter Singer’s question of whether we’d save a child drowning in front of us. Of course we would, you say. But Singer (the bad boy of ethical philosophy) points out that children are dying all over the world from preventable causes and we’re not diving into the pond to save them. McLauchlan drives into the moral issues that come out of Singer’s question. He discusses how to build a moral life in a secular society, and whether we should be concerned about the suffering of people who don’t exist yet – the child who isn’t yet born but will one day drown. Not only whether we’d save the child, but why, and whether we’re morally obligated to. It’s wide-ranging. It climbs endlessly, further up and further in. This essay was the most practical and confronting one in the book. It was also hilarious. Though I would rather drown in a pond myself than attend an effective altruist retreat, there was something lovely about the characters; how ecstatic they were. Their reasoning is hard to fault. It was refreshing and hopeful to read about a community that talks a lot, without considering that talk as the effective thing they’re doing, but as a means to making real change in unglamorous, unglorified ways.

The final essay, The Hunger and the Rain, is set at another retreat, this time at a Buddhist monastery. While still an excellent piece, it is perhaps less engaging than the others. It brings the ideas from the previous essays and condenses them. It recalls arguments about cooperation, being, and consciousness, and brings them down to the level of the gene, putting forward Richard Dawkins’ claim that humans are just machines for genes to replicate themselves.

You don’t need a background in philosophy to enjoy this book. McLauchlan read Being and Time so you don’t have to. But if you’re the kind of reader who appreciates an infinite regression of questions, a childlike “but why, but why, but why,” then this is for you. If you’re someone who might, like the author, sink into a fantasy about the mall of the apocalyptic future while waiting for a Happy Meal, then this is for you. It’s a short book, but not a quick read. This isn’t a “read in the few minutes before bed” book. This is a “turn your phone off and concentrate” book. There are passages you’ll read multiple times, not because it’s difficult or obfuscating, but because it’s complicated, and beautiful in the way that all complicated things are beautiful.

“The result of all this computation and filtering is the phenomenal world: the sequence of predictions that plays out inside our minds. When we wave our hands in front of our face, the image is happening inside our skulls. Our brains have no direct access to reality but, starting from nothing, they’ve constructed a detailed, controlled hallucination, calibrating it against changes in air pressure translated into sound, streams of electromagnetic radiation into images, sense data into touch. Even when we take action in the world, the brain makes a prediction – ‘I will scratch my nose’ – and the body moves the arm, hand and fingers to make the prediction come true. All we ever encounter is prediction upon prediction, the exquisitely calibrated hallucination; and all we ever feel, all our joy and pain and sadness, is a fluctuating measure of uncertainty about the statistical accuracy of the model.”

Tread carefully though. As you can tell from this quote, if you’re prone to existential crises, this book will bring them out.

Tranquillity and Ruin is a book for this particular junction in history, when many people are experiencing mental illness for the first time. I found myself blinking back tears over the explanation of obsessional looping, just to have a name for it. That’s not to say this is a self-help book in any way. It isn’t a book of solutions. It persuaded me to try meditation, only to then scare me off by describing his experiences: “I had weird pulses of energy in my hands during the day. At night I experienced a fluttering in my mind, like something trying to batter its way free.”

The book is a curious exploration of the mind that will shed some light on what yours is doing. Despite not being self-help, I did find that it helped me.

No one ever did ask me what the book was about. Perhaps because my concentration face is not particularly welcoming. But if they did, I think I’d say it’s about trying to know yourself. Not who you are, but what and how you are. Perhaps uncertainty fits into that description. Maybe the two have to go together, because to know yourself is to know you know nothing. There are no answers in this book. That’s not what it’s for. But you do arrive at a certain destination, realising you still know nothing, but you know a little bit more, and appreciating at least, that we’re capable of wonder and curiosity, even if we are only a gene’s way of replicating itself.