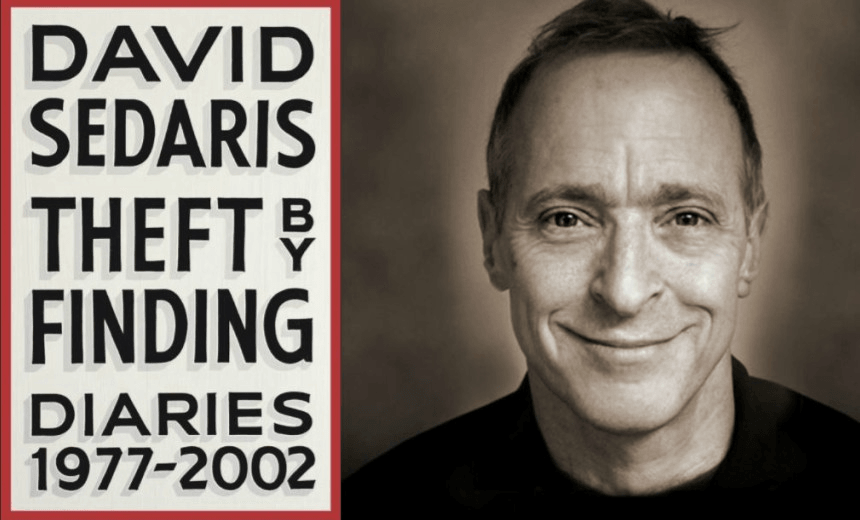 Book of the Week: The peculiar world of David Sedaris

In one of my favourite books, A Little History of the World, the author Ernst Gombrich compares our experience of the past to a scrap of burning paper falling down a bottomless well. The burning paper falls and briefly lights up the sides of the well as it falls: “It will fall slowly, deeper and deeper… Can you see it? It’s going down and down. Now it’s so far down it’s like a tiny star in the dark depths. It’s getting smaller and smaller… and now it’s gone.”

The paper represents our memory and, as memory is exhausted, receipts, letters, old photographs, archives, imprints in clay, and so on: the meta-data of existence.

The haunting, elegiac passage begins with another image: “Once you were so small that, even standing on tiptoes, you could barely reach your mother’s hand. Do you remember?” For some reason, as I read this, my face shudders and before I know it, I’m crying. Christ, what the hell’s wrong with me?

Diary entry from Theft by Finding by David Sedaris, dated November 9, 1978: “I plugged in a second space heater. It worked for two minutes before the circuit blew. Then it was back to the cold, only with no lights. I tried to cry, but nothing came out, so I coughed instead.”

For most, these glimmers of the past are fitful, just as Gombrich describes. But David Sedaris is not like most of us. Sedaris has documented the sides of the well in pitiless detail over 40 years of diaries, day after day, over roughly eight million words and 156 volumes. Theft By Finding, the first volume of the diaries, starts in 1977, when Sedaris, 20, is hitching between menial jobs (”Ronnie and I got a ride from Lonnie and Tammy…”), and goes to 2002, when he’s a celebrated writer, and war has been declared on terror.

Hung between these two points, like well-loved tea towels on a washing line, are constants such as Sedaris’s fondness for the International House of Pancakes, day-time TV, and alcohol and drugs. Unlike some of the casualties who appear in the pages of Theft By Finding, he escapes ruin by the skin of his teeth, saved perhaps by the more powerful habit of writing, but some of the early entries have a scratched, jagged quality, as he goes down or up again.

September 1, 1979: “I always cut the speed on the Patti Smith Radio Ethiopia album. I use a razor, then snort it with a straw, and when I’m through I stand outside the bathroom and think of how nice my jade box is.”

In his dogged diaristic commitment, Sedaris reminds me of Bill Cunningham, the photographer who cycled the streets of New York with his camera, replacing the bike each time it was stolen (“That’s my 29th…”). Cunningham’s small room above the city filled with negatives as the decades passed, filing cabinets and boxes of negatives, which he slept on, before rising early each day to begin searching again.

But whereas Cunningham sought the beautiful, the eye-catching, chronicling the city’s denizens for the New York Times, Sedaris is a sponge for hilarious, unnerving weirdness – and for a kind of casual, everyday violence. The racism, misogyny and homophobia he catalogues is breathtaking in its mundanity, in its vigour. It’s everywhere, this stuff. The pages are punctuated with fistfights, with the immediate threat of a knuckle sandwich. In the street. On the train. On the news. Seeping through the walls from next door.

In the documentary Bill Cunningham New York, two girls shout at the photographer for taking their photograph. “Don’t take a picture of us! I’ll break that fucking camera over your head.” Cunningham turns his bicycle away, serenely. Like Cunningham, Sedaris retains, mostly, a knack for equanimity in the face of such outbursts. The encounters he records can be intensely hurtful, infuriating, baffling, but he notes them down with a neutral, almost detached tone, committed to getting the details right.

June 13, 1979: “I was walking home when someone in a passing car leaned out the window and spat right in the center of my face.”

But to focus on how horrible people can be to one another is to miss the point. The book is a delight to read, full of scenes and people who, in their oddball humanity, are captivating. There’s a would-be toe sucker who corners Sedaris in a bathroom in a bar: “Just hear me out, Dave, because I think you’re really going to like what I have to say. What size shoes are those you’re wearing?” There’s Sedaris’s French teacher, who throws chalk and vicious insults. “Teaching you is like having a cesearean section every day of the week,” she says to him. There’s a deaf man with a goatee in Sedaris’s painting class, who blithely breaks wind, assuming that as he cannot hear the reports, neither can his fellow students. Sedaris’s vision is not of the organ at the centre of our bodies, the heart, but of life’s eruptions and eructations.

July 30, 1989: “I was standing on Clark Street when an elderly woman approached riding one of those electric carts people take to when they’re not quite crippled enough for a wheelchair. ‘Out of my way, asshole,’ she said.”

One of Sedaris’s common refrains, as he encounters yet another preposterous situation, is – can this be true? Is the world really so savagely cruel, so stupid, so peculiar?

Or, I wondered, could Sedaris be the problem here? This guy, he’s the equivalent of the gain knob on a guitarist’s distortion box, turning the nondescript signal of reality into a moronic inferno. But, well, no. I ride the tube as I gulp down the book. London’s sirens tear past outside as I type this. On the radio they say someone’s been throwing acid in people’s faces. I think Sedaris could be onto something.

Thinking of Sedaris, and Cunningham too, I look at my own dog-eared collection of diaries. A memory card falls out from the pages. From an old camera, I guess. It’s full of photos, as it turns out, taken by my daughter when she was four or five. I’ve never seen them before. Some are blurred, swirling with movement, but others are sharp. Flames trickle out, lighting up the walls. A tree flares against the sky. Soft toys stare back at the camera, or avert their faces. A pair of roller blades lies on the floor. And there we all are, minus you, darling. Everything burns with intensity now.

He writes, “I never knew my mother had been captured on film, moving… We see the island. Boats. More island. More boats, and then there’s Mom, who waves goodbye before ducking into a thatched hut. Then the camera is handed to someone else, and we see Dad pull her out. He is young and handsome – he is always handsome. When he points at the camera, Mom buries her head in his chest. Then he lifts her chin and they kiss.

“Watching this, Dad stomped his foot on the floor, the way you might if you just missed the bus and knew that another wasn’t coming for a long time.”

Thanks for the memories, David.