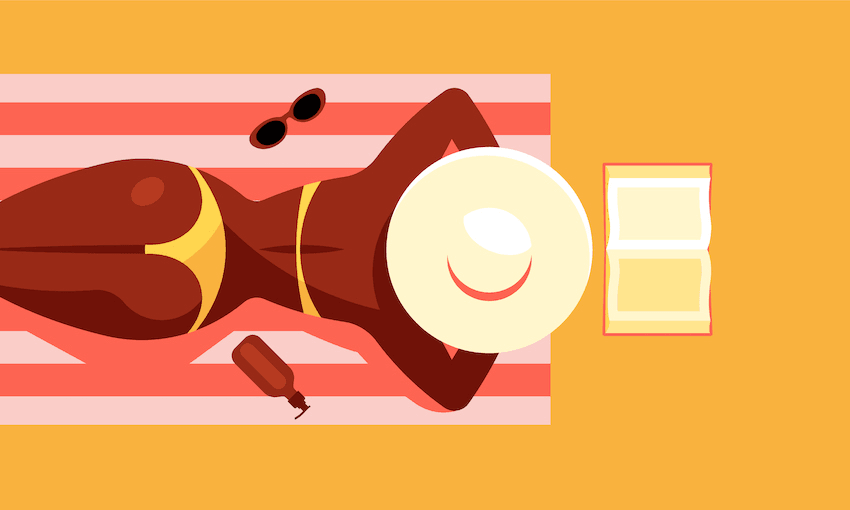 The Unity Books bestseller chart for the week ending December 3

A fascinating exploration of three areas in Tāmaki Makaurau, to make you realise that the Domain isn’t just the park with the museum, One Tree Hill isn’t just a lovely place to walk and see some sheep, and Stonefields isn’t just East Auckland’s newest suburb. Lucy Mackintosh reveals the rich stories and histories of Pukekawa, Maungakiekie and the Ōtuataua Stonefields, so that we can more deeply understand our biggest city.

A well-deserved number one for the Big Smoke.

What’s a better holiday read than a memoir by a charming actor who’s totally obsessed with food? Maybe said book plus a good hoard of snacks.

“Anna and her older sister, Maria, sleep in a one-window cell barely large enough for a horsehair pallet. Between them they own four copper coins, three ivory buttons, a patched wool blanket, and an icon of Saint Koralia that may or may not have belonged to their mother. Anna has never tasted sweet cream, never eaten an orange, and never set foot outside the city walls. Before she turns fourteen, every person she knows will be either enslaved or dead.”

(It is legit uplifting, we swear.)

Reviewers reckon it’s the author’s best yet. The New York Times, after some teasing comments about the fact that Crossroads is the first of a trilogy, and that the name of the trilogy, “A Key to All Mythologies”, gives him the ick, calls Crossroads “a mellow, marzipan-hued 70s-era heartbreaker. Crossroads is warmer than anything he’s yet written, wider in its human sympathies, weightier of image and intellect.” A winner from the Father of the Midwestern Family Drama.

The author of Olive Kitteridge has a new novel for our shelves – her third about Lucy Barton.

A loose follow-on to Faulks’ 2005 novel Human Traces. The Guardian compares the two: “Human Traces is a novel of ideas in the 19th-century tradition, a sweeping epic that tackles big questions about the nature of cognition and the human predisposition to madness. Snow Country, like the turbulent interwar years in which it is set, is more provisional, less sure of its ground. It is a love story that doubts the nature of love, an exploration of the redemptive capacity of psychiatry that grapples with the possibility that the self might not be real but only the ‘flickering wave of some electromagnetic field’.” Brace yourself for some bleakness before plunging in.

Megan Dunn’s memoir-in-essays is one of our reading highlights of 2021 – funny, grounded, poignant, and hugely readable. She told Saturday Morning, “I hope people will smash it back like a packet of TimTams, the way me and mum would when we were riveted watching a piece of telly together.” For those after just one bickie (at least until the sugar takes over your bloodstream and you’re helpless to reach for more), here’s an excerpt.

In The Spinoff’s Christmas 2021 book-shopping guide, Catherine Woulfe prescribes She’s a Killer as a gift for people who “maintain a polite facade but underneath they’re at level four, freaking out, species-extinction turmoil over the climate crisis and humanity in general.” Note: this book is not intended to soothe such people – it is set in a dystopian, near-future New Zealand – but it may make them feel a little less alone.

You can read an excerpt here, including a bonus note from the author (who doubles as the redoubtable publicist at VUP, sorry, THWUP.)

Rashbrooke makes the case that while New Zealanders like to think we have a classless society, that’s essentially baloney. In a Stuff article about his new book, Rashbrooke writes, “If you’re a young New Zealander, nearly one-third of your income can be predicted from what your parents earned. That’s much less than in deeply unequal America, but still twice the rate of egalitarian Denmark. Advantages are passed down the generations; the wealthy have become ‘opportunity hoarders’.” BTW, the Stuff article is titled “A classless society? Don’t make me laugh”, however the author appears to be doing very little laughing.

2  Aroha: Māori Wisdom for a Contented Life Lived in Harmony with our Planet by Hinemoa Elder (Penguin Random House, $30)

The little book that all of Oprah’s loved ones will receive in their Christmas stocking this year (and probably all of our loved ones, too).

3  After the Tampa: From Afghanistan to New Zealand by Abbas Nazari (Allen & Unwin, $37)

An inspiring memoir. Nazari writes about his family’s escape from the Taliban in a decrepit fishing boat, their rescue from drowning by the Tampa, and the precariousness of finding refuge once Australia closed its doors to asylum seekers. You can read an excerpt here.

A new addition to the BWB Texts family of affordable, concise, brilliant, local non-fiction. From the publisher’s blurb: “Drawing on the experiences of researchers and scientists from diverse backgrounds, this book raises two important questions. What contribution can mātauranga make to addressing grand challenges facing New Zealand and the world? And in turn, how can Western science and technology contribute to the wellbeing of Māori people and lands?”

A second inspirational local memoir for Wellington! Quinn lost her leg to cancer just before her ninth birthday, and writes about how she has come to find acceptance and use her experience to help others.

Just like you can’t remove red wine from a silk shirt, you can’t remove Imagining Decolonisation from the bestsellers list (not that you’d want to, unless you’re the person scraping the barrel to come up with a silly comment about it for the 50th week in a row).

The debut poetry collection from Nicole Titihuia Hawkins, and also the debut book release from new publisher We Are Babies, which focuses on giving a voice to marginalised writers. Two rounds of congratulations!

But about the book: “With poems centred around whānau, mana wāhine, and love, Whai explores what it means to be Māori in a colonised space. These poems are playful, staunch, vulnerable and at times utterly hilarious. They have big kaiako energy. While her work is anchored in the present, Hawkins stays in conversation with her ancestors, and looks towards the future.”