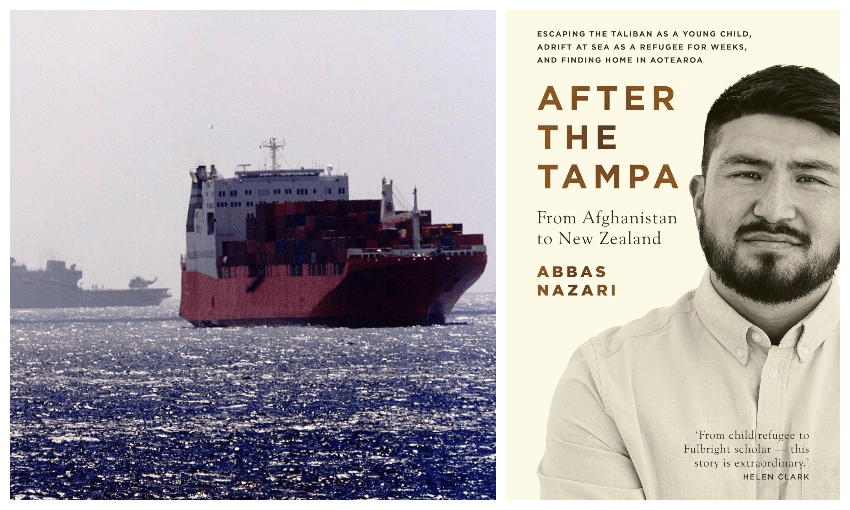 From the Taliban into the storm: a story of terror at sea

Abbas Nazari was seven when his family fled their village in Sungjoy, Afghanistan, to escape the Taliban. Months later they struck out from Jakarta on a wooden fishing boat packed with 433 other refugees, seeking asylum in Australia. They very nearly didn’t make it.

The following is excerpted from Nazari’s powerful and deftly-reported memoir After the Tampa: From Afghanistan to New Zealand, in which he recounts a terrifying month spent at sea, first in the decrepit Palapa, then on the Norwegian fishing boat the Tampa, which rescued the refugees as their boat sank.

The Tampa was then embroiled in controversy: as the closest port Australia should have taken in the asylum seekers, many of whom needed urgent medical care; instead, after a long stand-off, it established an offshore detention centre on Nauru Island, and sent many of the group there. Nazari and his family were among those resettled in New Zealand.

In this section Nazari remembers a storm that hit just a few days into the Palapa’s journey.

I remember watching the Palapa falling to pieces before my eyes as each wave whacked its hull with a vengeance. Timbers cracked and split. Nails ripped away from boards. Water crashed over the deck and filtered down between the cracks, drenching us in hundreds of little salty waterfalls. The hatch had been closed, but a large hole had appeared as the decking fell apart.

The Palapa was taking on water. Men from the lowest level began bailing with buckets and plastic bags, forming a human chain up the ladder. Someone fashioned a pump out of engine parts. Others worked to seal the hole in the deck using ropes and a tarp, and some used more broken engine parts to hammer posts back in place. It would seem we were making good progress until another big wave crashed over us, undoing all our work. With the pump on full blast we seemed to be just keeping up, but after a few hours it too gave up the ghost.

The storm was relentless – the Palapa was like a bath toy at the mercy of an insolent child. With every toss of the boat we were helplessly thrown about, crushing one another in a sea of bodies. Luggage, clothing and plastic bags of vomit became random projectiles. In the darkness I couldn’t make out if I was covered in shit, piss, water, vomit or all of the above.

I hung on to Dad, and he clung to his other children. He had wrapped a towel around a rafter and held it tight to anchor us, and undid his belt to make another handle for Mum. Seeing this, others followed suit.

The single men continued to bail water, undeterred by setbacks in the form of fresh waves. The crew remained on the captain’s bridge, no doubt knowing such efforts were futile. The Palapa fought bravely, but it was clear that it would not hold together much longer.

Then there was a stomach-turning plunge and a piece of the timber frame ripped clean off the side of the boat, leaving a gaping hole big enough to swallow a man. Someone quickly pulled a child aside just as a piece of luggage was sucked into the hole. A second later and that child would have disappeared into the nothingness. It was no more than two or three metres from where we were huddled.

Looking through the hole, all I saw was blackness. The only delineation between sky and sea was the water’s surface, frothing like a rabid beast. Dad gripped me tight as others rushed to plug the hole with whatever they could find.

It was at this point that we began to give up hope. There had been four chances of rescue and none had happened. The likelihood of any craft offering assistance at night, in the pitch dark, was close to zero. People’s screams became distant and hushed as they clung together, and a deathly silence took hold while the storm continued to rage.

The prayers began as urgent murmured exaltations, and soon everyone’s silent prayers combined to become a single voice. The prayers grew louder and louder, each verse sung out in defiance of the waves. We entered a trance-like state, our prayers drowning the crash of the waves. Freezing seawater cut our flesh like razorblades.

It was Du’a Kumayl — the prayer of penance:

Oh Lord, forgive me every sin I have committed and every mistake I have made.

If there is one thing I want you to take away from this book it is this. I want you to imagine being in a situation where the future – the very existence – of your family forces you to make an impossible choice. You have to choose whether to stay in the life you know and face misery upon misery, or leave and take a chance on the slightest sliver of unseen hope.

What would you do?

Seeing Mum crying, I began to weep too. Tears rolled down her cheeks and onto Mojtaba’s forehead. Even Dad was beginning to crumble. As the head of our household, Dad, like all the other fathers on board, was responsible for our being there. He had carried his family all this way, and now it was all falling apart. His dream of delivering us to safety was being shattered with every wave. He held himself solely responsible for our imminent deaths.

The cacophony of prayers was now dialling down to a few hoarse voices. On this tiny vessel surrounded by darkness in every direction, the prayers changed tack. We were no longer praying for salvation; we had accepted our fate. We prayed for death to free us from this suffering.

We had accepted that we would die that night.

My Lord, have mercy upon the weakness of my body, the thinness of my skin and the frailty of my bones.

“Oh God, if we are to meet You on this darkest of nights, please grant us one last wish: that our bodies be washed ashore so that we may be buried on land.”

Fear was plastered on every face. Parents whispered their own prayers in Farsi between the Arabic passages.

The man next to us prayed for mercy for his children.

“Oh God, spare the children for they are innocent. Take me instead.”

Hot tears rolled down my frozen cheeks. I had no understanding of why we were in a boat out in the middle of an ocean far from home. I still did not fully grasp the forces that had propelled us to leave the mountains. I trusted and followed my father in those things. But at that moment I did understand one thing: we were about to die.

Even then, a boy of seven has no understanding of death. Will it be quick? Will there be suffering? Will I see my siblings again? What about my parents? Did I deserve to die? Why me? Why us? Why was God angry at us? The questions streamed through my mind as we were rocked by wave upon wave.

Soon enough, the praying stopped. Even the crying and puking and dry-retching stopped. All became deafeningly silent.

Everything blurred into the never-ending motion on a sea of black.

I do not know how long it was, and no one can now recall, but the darkness began to abate and there was a faint light. Soon daylight entered through the hole in the side of the boat. As the sun began to rise, the waves subsided to a gentle rocking and then a mild sway. The clouds dissipated and tears of joy washed away the darkness of the night.

God had heard the prayers of these poor Afghan mountain people above the thunder of the waves. And He had answered those prayers.

After the Tampa: From Afghanistan to New Zealand, by Abbas Nazari (Allen & Unwin, paperback $36.99) is available now as an ebook, and once we’re out of Level 4 it will be available from Unity Books Auckland and Wellington.