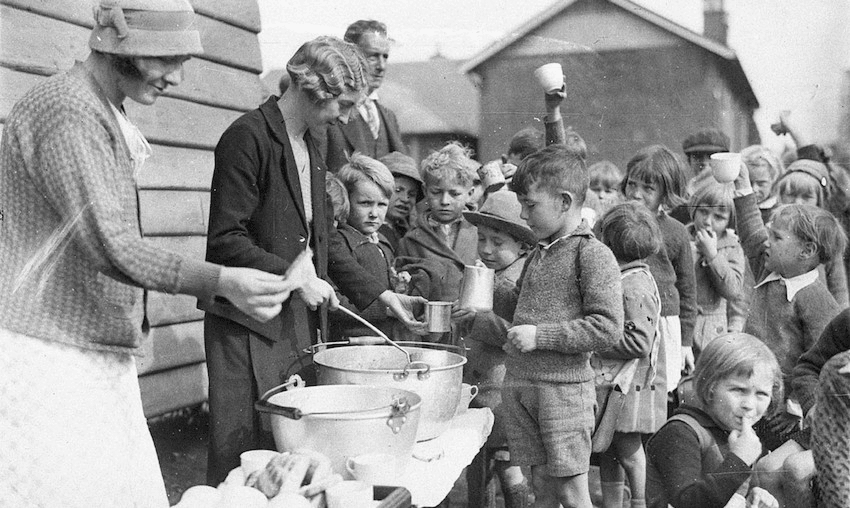 Schoolchildren line up for free issue of soup and a slice of bread in the Depression, Belmore North Public School, Sydney, 2 August 1934 (From the collection of the State Library of New South Wales www.sl.nsw.gov.au)

Schoolchildren line up for free issue of soup and a slice of bread in the Depression, Belmore North Public School, Sydney, 2 August 1934 (From the collection of the State Library of New South Wales www.sl.nsw.gov.au)

‘Yes, it’s endearing that the PM said that the Easter Bunny is an essential service but I wondered how many kids had a hope in hell of seeing three good meals a day let alone a chocolate egg.’

Bob Dylan’s latest, Murder Most Foul, is an interesting and enticing listen. I’m never going to get a handle on it until I have more than two listens. Nick Bollinger is a good guide though. I think of the string of assassinations, JFK, Malcolm X, Martin Luther King, Bobbie Kennedy and remember Dylan in 1963 with his prophetic ‘The Times They are a–Changing’…

And there was Woodstock.

I’m the wrong generation for Dylan. I’m not a boomer, I picked him up from my sons as I did The Beatles and Joan Armatrading’s ‘Down to Zero’, and The Band. In the ’60s I began really listening to lyrics. I loved Elvis but the lyrics were pretty ho hum even if ‘All Shook Up’ is a good metaphor. Kris Kristofferson’s early lyrics, ‘Me and Bobby McGee’ and ‘Sunday Mornin’ Comin’ Down’, were more like the poems from the poet he was meant to be when, in 1958, he won that Rhodes scholarship to Oxford where he also played rugby.

My sons and I disagree over my liking for Doctor Hook and, like everyone else in Aotearoa and the English–speaking world, they hate ‘Sylvia’s Mother’, which I think is one of the neatest pieces of satirical theatre in pop history. But, as Phil O’Brien on RNZ Saturday Night requests says, when his listeners get excited, “it’s only a song people, only a song.”

I want to whine I’m too old, too short, too busy, whinge about not being able to see properly, but my mother’s eye is upon me. Rose, although she’s been dead for 50 years, still lives in my head. She says, “Stop your grizzling, just do it.” She was always on about soap and water. “Soap’s cheap. We might be poor but we can be clean. Have you cleaned you neck? Down there?” Which was the closest she came to saying that we all had bums and other things that needed to be kept clean.

I’m also thinking about the mid ’80s when Roger Douglas and Richard Prebble persuaded the Labour government to go feral which paved the way beautifully for the National Party, under the financial regime of Ruth Richardson, to nearly finish off the working class by choking the unions.

I never picked fruit for a job but my brother and sister did and my two uncles stole fruit during the ’30s and delivered it to us. It was one of the few times that Rose didn’t growl about manners. She made a cup of tea for Orm and Cliff, took the lid off the old wood and coal stove, got the long fork, made them some toast, then the three adults simply watched us three kids hoeing into peaches like there was no tomorrow. I don’t want kids to go through that kind of thing again but they will and they are. What seems hard for people – boomers, Gen Y or X or anyone – to grasp is that if you start low down in the social scale then when everything else turns to shit, you’re still there at the bottom being pushed even deeper into it.

Yes, it’s endearing that the PM said that the Easter Bunny is an essential service and I loved it while at the same time wondering how many kids had a hope in hell of seeing three good meals a day let alone a chocolate egg.

I was out peering at Old Port yesterday and a woman passed, stopped, called, “You okay Whaea?” I said I was fine, yes thanks, I had help with shopping, and she told me her name and said, “I’m passing two or three times a week, if you want anything done, just sing out.”

I guess there’s always the fact that the human spirit of kindness will triumph over most things, especially on a one to one level. When we become ‘they’ we cease to matter. ‘The homeless’, ‘the elderly’, the ‘boomers, ‘Gen X’, faceless, less than human, just blobs. This suits big business and financial interests – they don’t worry about blobs.

Four strawberries from the bins and six smallish ripe tomatoes off the wild one.