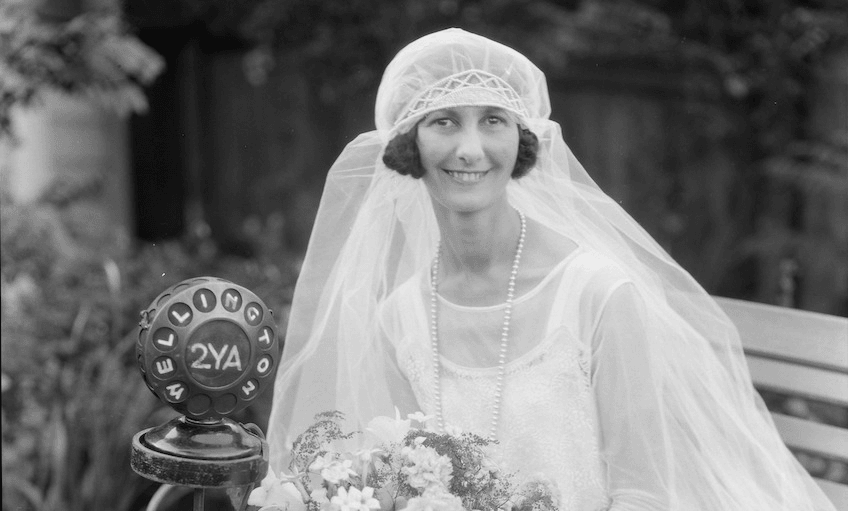 Aunt Gwen of Radio 2YA at her wedding reception held in her parents’ garden. This was New Zealand’s first ‘celebrity wedding’ to be broadcast live. Miss Gwen Shephard on the occasion of her marriage to Mr B.H. Stennett, Alexander Turnbull Library, Wellington, Ref: 1/1-032983-F

By Peter Hoar
Guest writer
Made possible by

Aunt Gwen of Radio 2YA at her wedding reception held in her parents’ garden. This was New Zealand’s first ‘celebrity wedding’ to be broadcast live. Miss Gwen Shephard on the occasion of her marriage to Mr B.H. Stennett, Alexander Turnbull Library, Wellington, Ref: 1/1-032983-F

‘Be kind to animals,’ Gwen Shepherd instructed an avid listening audience when her wedding was broadcast in 1930, as told in an extract from a new book by Peter Hoar.

Gwen Shepherd wore a gown of ivory georgette when she married Bruce Stennett at Wellington’s St Paul’s Pro-Cathedral, now known as Old St Paul’s, on Wednesday, January 29, 1930. Gwen had wanted a small, private ceremony, but around 2000 people were waiting in the streets outside St Paul’s and all the seats inside were occupied. As Gwen arrived, the crowd cheered loudly and children were lifted by parents to get a better view. There were radio microphones inside the church, where Archdeacon Innes Jones officiated, and Clive Drummond, a well-known 2YA announcer, led a live broadcast of the ceremony, even though his station was normally off-air on Wednesdays. Outside the church after the ceremony, photographers were snapping away as quickly as they could, and the press of the crowd made it difficult for the bridal car to get clear. The fine weather allowed the reception to be held in the garden of the Shepherd family’s home in Moxham Avenue, Kilbirnie. Speeches were made and broadcast by the 2YA microphones placed at the head table. Gwen spoke and told her listeners to do a good deed every day and be kind to animals.

Shepherd was known to thousands of New Zealand children as Aunt Gwen, and had been one of the hosts of 2YA’s “Children’s Hour” programme since 1927. Along with the other Uncles, Aunts, Cousins and Big Brothers, Aunt Gwen told stories, presented musical items and introduced talks for young radio listeners. Her wedding marked the end of her tenure at 2YA. The news of her resignation in December 1929 caused a flood of letters, postcards and parcels. Children wrote of their sorrow at Gwen’s departure. Some women wrote to say how her show had cheered both them and their children. One riddle sent to 2YA asked, “Who is the most unpopular man in New Zealand? Answer – Uncle Bruce, because he is taking Aunt Gwen away.” An estimated 30,000 people tuned in to the broadcast of Gwen’s wedding. There were 53,400 radio licences in New Zealand at the time.

As a popular public figure, there was little chance that Gwen’s wedding was ever going to be a private affair, and photographs of the occasion appeared in the press. The 2YA logo displayed on the microphone beside Gwen left no doubt about which station had broadcast “the first radio wedding in New Zealand”. The microphone was used by Clive Drummond to comment on the wedding reception and to also broadcast the speeches, one of which was made by Joseph Davies, the director of 2YA. The broadcast was a technical triumph for the station, and good publicity as well. The presence of a microphone at the wedding made an intimate ceremony a public event. It added 30,000 invisible guests, and demonstrated the possibilities for radio to connect people through sound and imagination.

At that time in New Zealand, radio was a source of fun and delight, particularly for the young. Sessions for children began as transmission hours increased, and were usually placed at 6pm to 7pm timeslots. The format for these sessions included stories, songs and jokes (often sent in by and performed by children), with adults supplying the announcing. The adults on children’s radio were called Uncles and Aunts, like Aunt Gwen. This gave them a form of authority that seemingly placed them within a listener’s family structure, and was warm and not too threatening. Uncles and aunts promised mischief and fun.

The presenters were jolly, unpredictable, friendly and amusing in ways that parental figures so often were not. The aunts and uncles could also enforce norms of behaviour on their young listeners and their unseen presence made them seem larger than life. But sometimes young listeners might get something of a jolt from their friendly radio aunts and uncles.

A letter to Aunt Gwen shows the ways radio could be used as an extension of parental authority: “Dad has just bought a new radio set and I would like to join your radio circle. I am six and a half years old. My birthday is on Feb 22nd. I listned [sic] to you and Uncle Toby and I liked it very much indeed. With love from Dick Falconer.”

At the foot of the page is a note in an adult hand: “The above is a solo effort after a lot of work with pencil and rubber. Please reply next Saturday night as he will be away from home until then. Please tell him that he is quite good with the pencil but he must not write his name on the wallpaper. With many thanks, L.M. Falconer. “

Sadly, there is no record of how young Dick Falconer reacted when his beloved Aunt Gwen wished him a happy birthday with one breath and told him not to write on the wall with the next.