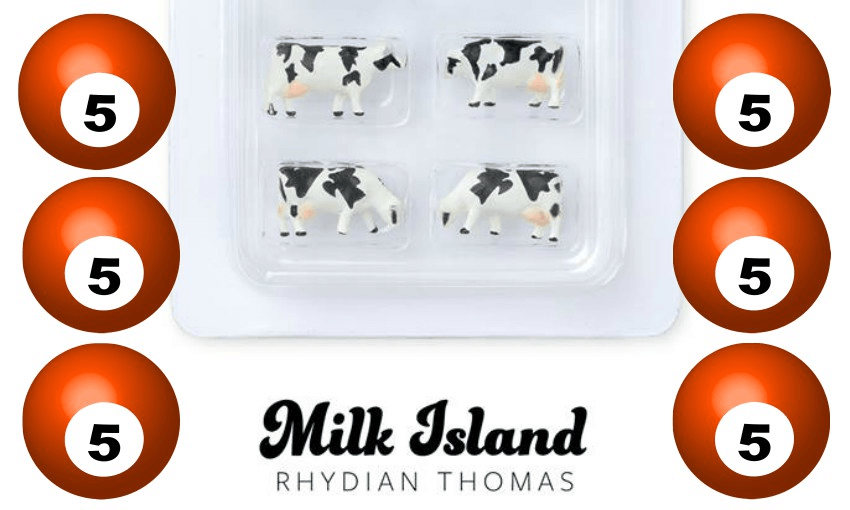 The fifth best book of 2017: Milk Island by Rhydian Thomas

By Joseph Barbon
Guest writer
Made possible by

All week this Christmas week we count down the best six books of 2017. Number five: the wild and exciting Milk Island, by Rhydian Thomas, described by reviewer Joseph Barbon as ‘teetering thrillingly on the brink of bad taste’.

As well as being the most conspicuous absence from the recently-announced Ockham Prize longlist, Rhydian Thomas’s Milk Island is probably the defining cultural document of the Fifth National Government. There are unintentional contenders – The Block NZ, maybe – but nothing else that’s consciously captured bleak comedy of the political culture of the John Key years so precisely.

It was meant for release last year and expected to remain relevant through a predicted fourth term, but the novel’s sudden recontextualisation suits it. Free from the chains of topicality, it can be the anarchic era-capper it always really was.

The novel, Thomas’s first, is set in 2023, when after a series of devastating earthquakes a fifth-term National government has turned the South Island into a vast agri-prison complex, or as a lawsuit-wary reporter puts it, “a suite of public-private correctional, agricultural and tourist initiatives”. It’s split into four stories, united by a few plot elements and by Milky Moo, the nation’s most beloved cow, who can produce 56,000 kilograms of milk a year, stand on her hind legs, and suffer. She’s both a silent witness to the characters’ desperation and inhumanity and a confusingly sexualised national totem.

We’re introduced to her in one of the most striking first paragraphs I’ve read in ages: “A pastoral scene: Milky Moo, the nation’s greatest cow, is being emptied by a humble sharemilker under the warm light of an April sun in Kaikōura. The cow, famous and beautiful, is indifferent to the labour underway below her, and the sharemilker gently tugs away, handling her with the patriotic care and pride she deserves. The milk spills easily. All is well in New Zealand, and God’s Grace is everywhere.”

The book has been bizarrely neglected by the literary establishment. Like the year’s other great debut novel, Annaleese Jochems’s Baby, it shuns the stodgy national house style, and seeks to actually charm us line-to-line, to impress us with every sentence’s wit, tonal boldness, and conceptual density.

It’s a satire without villains. Greed is only a passive force, a kind of entropy rather than something with any potentially sexy agency. Thomas nails what distinguishes the Fifth National Government from other neoliberal administrations – the total absence of some kind of social-climbing myth. The lip service paid to entrepreneurialism during the Key Years was minimal; deregulation was always about security, not opportunity. You could never do a Key-ite take on Wall Street – there wasn’t a financial cowboy angle, it was strict mock-technocracy.

There’s a passage where we hear the government’s origin myth for Milk Island that perfectly pastiches the implicitly anxious can-do rhetoric, the unadventurous adventurousness. The PM and his deputy are having a couple of post-earthquake beers in the Beehive late at night discussing what to do about an island that’s “a right buggery from Picton to Bluff”, looking at the problem with the manly pragmatism of “a couple of blokes looking at a wheel-sunk ute in the muddy paddock of a particularly wet April”. The feel for soundbites is perfect: they vow to get it done “before the cows come home” as a pretext to extend emergency powers, and forced resettlement gets passed as the “Workshy Bill”.

Thomas, who’s worked for the Greens, doesn’t make any phoney attempts at balance or bias-concealment. I love how hateable it is – the amount of mental and rhetorical work you’d have to do to dismiss or denigrate it is basically nil. How can you treat a book where 30 convicts jack off onto an engineered super-cow while serenaded by Dave Dobbyn’s “Slice of Heaven” as legit satire? But the absurd causality’s the point. In the same way Robocop understood the indefinable spiritual affinity between Reaganomics and a man getting covered in toxic waste and exploding in a puddle of goo on a car windshield, Milk Island gets the elusive connection between the flag referendum and small children getting erections at a petting zoo.

Like most good satirists, Thomas is more of a closet moralist than an activist, with a weird Old Testament vision of societal decay. It’s almost irrelevant that greed’s literally causing environmental and social devastation, because it works here on the same psychological principle as ‘gay marriage causes earthquakes’. We’ve sinned, the land’s being punished. The tone’s not at all snide – more feverish, apocalyptic, grotesque.

However the back half of the novel feels both less alive and less edited; you can’t tell if it was written a lot slower or a lot faster. The third story, focusing on a prison operator with a side gig conducting political hits, is fine, but the satire’s cheaper and more familiar. She takes down a Green MP by editing a phone interview and photoshopping a bong into one of his pictures. Not bad, but pretty anonymous stuff after what we’ve just read.

The fourth section is fairly dull – there’s some social media stuff I didn’t care about at all, and the tone and language get solemn and starchy. We go from sentences like “Love is a scratchie card with no prizes” to ones like “Ricky kept his knife to the lobbyist’s cheek, pulling him through the sparse tussock and cursing away his lame cries”.

At its best Milk Island teeters thrillingly on the brink of total gratuitousness and bad taste. It’s only disappointing when the book plays it safe because the rest of it’s so strange, daring, sometimes virtuosic. Milk Island’s exciting and era-encapsulating, and Thomas will probably be a major New Zealand novelist. He feels like one of those guys who’ll eventually come out with some terrifyingly brilliant 1200 page novel that young male undergraduates for decades to come will conspicuously read in public hoping to impress girls – get in on him now before it’s cool to hate him.

NB: Rhydian is that Welshman who wrote that incred essay about the times he’s been punched in the face since he emigrated to New Zealand.