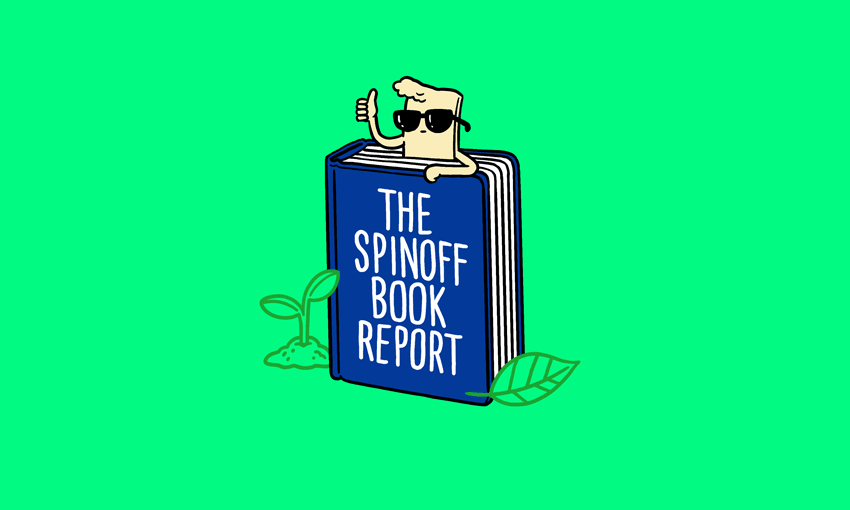 Welcome, welcome, come in out of the rain, sit yourself down for this fifth edition of The Spinoff Book Report. It’s all very easy and low-key: these are books I’ve read recently and adored, the ones I plan to push on my friends, the ones I recommend to you without reservation.

There’s accidentally a bit of a theme happening this time: a green, growing, outdoorsy kind of theme. I hope it shores you up.

A sharp and intelligent memoir. Bits of it will make you wince. Barnett remembers lying on a bed with a high school boyfriend, excited, as he pinches her tummy. In one spot: “Pretty good.” Another: “Nope, you’ve got some fat here.” She remembers a night in her third year of art school. “I don’t usually have sex with chunky girls,” says the guy she’s just had sex with. “It wasn’t that bad.”

But the line that’s stuck with me pops up in a chapter about tramping with other women. “We feel a little dangerous, as though we’re engaging in something taboo. In a way we are: to be absent from our families and duties is to be selfish. And women aren’t selfish.”

Regenesis: Feeding the World Without Devouring the Planet by George Monbiot (Allen Lane, $37)

A book about soil and shit, trees and rivers and erosion, people and how we feed them. For George Monbiot, a Guardian columnist and environmental campaigner, it’s not free-range or organics but basic maths that’s important: he wants us to comprehend just how much land we are using – and thereby damaging, and taking out of action for critical regenerative processes like rewilding – by farming.

We don’t come out of that equation looking good. “The nation with the world’s greatest hunger for land is New Zealand,” he writes. “If everybody ate the average New Zealander’s diet, which contains plenty of free-range lamb and beef, another planet almost the size of Earth would be needed to sustain us.”

He also wants us to see that there are better ways. There’s a soaring section about a farmer who has figured out how to grow glorious heaps of veges on a small patch of land without fertiliser or herbicides; another about a man brewing up protein-rich bacteria in great vats. Monbiot’s a stunning writer, and this is science that reads like hope.

This short story collection flits between Japan and Aotearoa, between generations and between apartments. I like how closely knitted the stories are and also how much breathing room there is in the prose. There’s an untetheredness, an airy titillation, a lilt to it – and a sense, always, that the ground could drop out from under you. Suicide is everywhere, as are spirits, and sex, and grief. Energy, flicking and zapping and buzzing. “It just goes to show, bud, everyone is just hanging by a thread,” says a brother writing from the other side. “Do everything you want to do, bud. Live your dreams and all that shiz! Fuck around!”

A startlingly lush and textured debut, set in Tāmaki Makaurau and centering the intergenerational trauma of colonisation. A thriller. Not a dud note, pacy as hell. Lots of bush and sea. Two main characters, both Māori: a female cop who’s very good at her job but risks being annihilated by it; a young man who sets out to honour his tīpuna and gets terribly, believably twisted.

Bennett (Ngāti Pikiao, Ngāti Whakaue) is probably best known for his involvement with Teina Pora’s long fight for justice – six years ago he won a Ngaio Marsh Award for his nonfiction book about the case, In Dark Places, and he’s also made an award-winning documentary The Confessions of Prisoner T, which helped bring crucial evidence to light.

Bennett says he wrote this novel as a “Trojan horse carrying big, complex, difficult themes”. We’ll publish an essay from him when the book’s out on August 10.

I grew up on an orchard and every so often Dad had to apply a spray that Mum called “a real nasty”. She’d get the washing in off the line and keep us kids inside while it was going on.

But Dad would be out there on the tractor for hours, up and down the rows, the spray cloud billowing and blasting behind him. He’d wear his astronaut suit but I wondered, when he was diagnosed with dementia at 55, whether those sprays had anything to do with it. At the same time I thought, nah, surely if the spray was that dangerous we wouldn’t have been allowed to use it?

Neil Pearce has thoroughly dispelled that sense of security. He is an international expert on nasties and their fallout and his point is that New Zealand is utterly failing at protecting workers and others at risk. Our system sucks.

The book is a call to action but in places it reads like a professional memoir – keeping it taut and dry, measured, compassionate, Pearce tells gripping stories about Agent Orange and the New Plymouth factory that helped produce it, and of small-town sawmills where workers spent their days drenched in dioxins. “Putting the story in print is quite cathartic, and I think it is important to do so,” Pearce writes. “Some things happened that are just unacceptable, and if nobody documents them, they are more likely to keep happening … My main motivation is that very little has changed, and it needs to change. These are not just historical problems.”

You know Miller via her novels The Song of Achilles and Circe, both of which rule and are resurgent – 10 years after publication, in the case of the former – because BookTok loves them. Now, new fodder: a short story lovingly bundled up as a tiny and exceptionally beautiful hardback. “A small morsel, but nevertheless very dear to me,” writes Miller in an afterword. “Galatea was a response, almost solely, to Ovid’s version of the Pygmalion myth in the Metamorphoses.” In brief, Pygmalion (he’d be called an incel these days, Miller notes) is so disgusted by real women that he carves one from ivory, falls in love with her, and brings her to life. Happy ever after? Nah.

Fans of Circe, in particular, are advised to get amongst.

This is the kind of book you pick up knowing it’ll take about 20 minutes to tip you right over. And yeah, these poems smushed me into a puddle on the floor. Some I’d read before but with so many jangling together they landed different, harder. Certain lines stuck their elbows out. And there were so many poems I’d not read before, and read with a jolt: Victor Billot tearing strips off Scott Morrison; Dadon Rowell, grieving in the dust of the bushfires; Cindy Botha and her goddam haunting hammerhead shark, who

wedge of grey, shy fins sliced away and thrown

on ice with 100 million others. It took an hour for him to touch

By the end I felt a bit like that shark but I also felt a profound change of perspective, like I’d been yanked back from the centre of things and stood with all these poets, on the margins, together, screaming stop.

Right, that’s me – I’m going to bed with the new book by Emily Writes. Needs Adult Supervision, it’s bright pink and I love it and it’s out at the end of August.