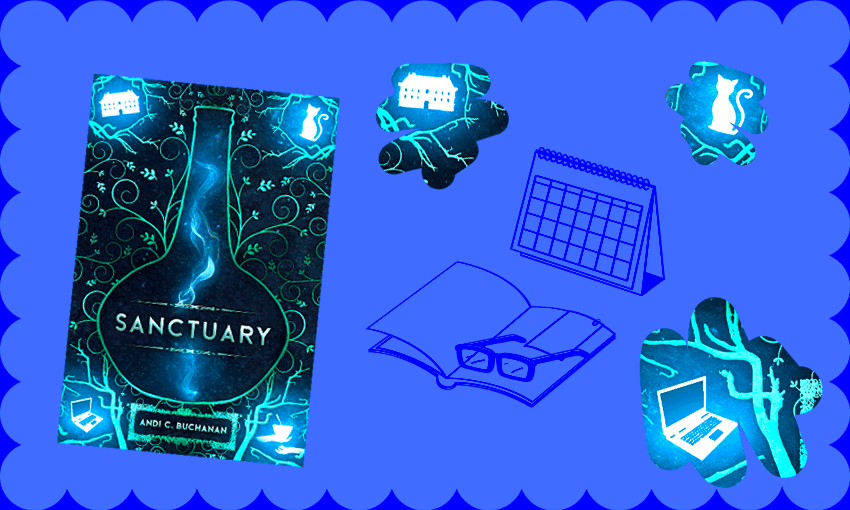 Human not machine: how autistic writers are writing new space for themselves

By Andi C. Buchanan
Guest writer
Made possible by

Wellington writer Andi C. Buchanan on how their new novel, Sanctuary, is part of a rich autistic canon.

The idea of the changeling – a baby swapped by the fae for one of their own – is now often thought to have arisen from observing autistic children. Some infants suddenly start to display autistic traits at the age of 15-30 months, leading parents to the conclusion they’d been replaced. Other parents, while not literally believing the story, found it a way of describing a “different” child – or an excuse for harming them.

Such beliefs about autistic people not being quite human have been used to dismiss and harm us for centuries. More recently we’ve been compared to Spock or robots, which is less dangerous, but still perpetuates stereotypes – especially about lack of feelings – and can be dehumanising.

Some autistic people have reclaimed these ideas, finding meaning and ways to understand themselves in these fictional portrayals, or better ways of explaining their experience to others. An online discussion board for autistic people that was popular in the early 2000s is named “Wrong Planet”, reflecting the sense for many that they are like aliens brought up among humans. But for many other autistics, such comparisons are still too uncomfortable.

There’s another way these non-human ways of being – fae, ghosts, robots, aliens, and more – can be used to explore the autistic experience. For many creators we are not these creatures or constructions – but we might be friends with them. They might be people we relate to, people we can help or who can help us. We have much in common with them, but not at the expense of our own humanity.

I’ve been fascinated by this idea for a while. My short story Even the Clearest Water (Fireside Quarterly, 2020) is about a water fae that saves autistic children from drowning; it explores obligation and exchange as the basis for a relationship. My recent novel Sanctuary (Robot Dinosaur Press, 2022) is about a neurodivergent found-family who live in a haunted house, and how they are building community with and alongside the resident ghosts.

I’m far from alone in exploring this. Wellington writer Rem Wigmore tells the story of a shepherd who lives on the outskirts of a village in their novelette Basil and the Wild (Middle Distance, Te Herenga Waka University Press). Basil, the shepherd, is non-specifically neurodivergent, rarely speaking, and spends most of his time alone. He is able to do most of what he needs to, but needs some support. While he has a strong relationship with his sister, most in the village view him as worthless, and his brother-in-law reacts to his impairments and support needs with hostility.

In the forest Basil meets Makarios, a “wild man”, unusually large and with cloven hooves, whose “mind turns differently too” – while no diagnostic terms are used for either character, Makarios can be interpreted as being bipolar. In their growing relationship, and ultimate retreat from the village to the wild, there’s both the indication of cross-disability solidarity, as well as human/non-human.

While autistic people in space opera have frequently  been associated with aliens – notably,  Star Trek’s logic-driven Vulcans – Kaia Sønderby’s Xandri Corelel series tells of an autistic human who is skilled in inter-species diplomacy. Being autistic is an advantage for Xandri in being able to communicate and reach agreement with these diverse species. Her skill stems in part from her ability in pattern recognition, and in part because she’s had to learn to read people very closely to survive.

Why are autistic people so attracted to these magical or other-worldly connections? Most of us experience loneliness and isolation – and if we are repeatedly rejected by humans then the idea of friendship with ghosts or aliens may almost seem less far-fetched.

It’s also the fantasy we might be able to meet someone else on equal terms; both of us having to adapt to and learn each other’s way of communicating, rather than always having to be the ones who make the effort, exhausting ourselves to the point of burnout. Rather than the assumption that we’re not normal and have to fit in with those who are, there’s the potential for two people who are equally different to explore building relationships and community.

Being equated with a non-human can feel dehumanising; it also carries the weight of being compared to them in all respects, whether or not they are accurate. I may relate to a non-human character because I like wordplay, don’t have a very expressive face, and may struggle to see the emotional underpinning of someone else’s decision, but I definitely have emotions, won’t steal your baby, and am only malevolent on my bad days. By exploring how an autistic human might relate to someone of a different species there’s room for that nuance – ways we are and are not similar, do and do not connect – rather than all the assumptions a direct comparison brings.

There is an interesting flipside here. When the Mars Rover Curiosity landed in 2011, it spawned commentary, tweets, webcomics and more from its point of view. We humanised it. While some picked up on the perceived melancholy of its isolation, others commented that what is truly defining of humanity was not that we have evolved to the extent we can put a robot on Mars, but that we taught it to sing Happy Birthday to itself while it was there.

There is a difference between a sentient non-human – a fairy or an alien – and an inanimate object; a microwave, say, or a hat. Robots, especially fictional robots, fit somewhere along the spectrum. But I also think the autistic tendency to personify even clearly inanimate objects is relevant here. It’s not exclusive to autistic people and not all of us do it, but it’s one of those shared traits that meet with shared recognition despite not being in any diagnostic criteria.

I am far from a minimalist, but an aspect of Marie Kondo’s method that resonated for me was thanking items before getting rid of them. While many, especially in the Western world, found it silly or awkward, it made a lot of sense to me, even though I have no connection to its religious origins. It’s not, for me, about whether my old sweater vest can understand my thanks – it’s about how I relate to it, my sense of my place in the universe and what is around me.

Our feelings of connection to the non-human can definitely emerge from feelings of isolation or loneliness, of not having ways to explain our difference. It can come from having – contrary to some stereotypes – more empathy than normal, even if we’re not always sure what to do with it. But it also comes from open-mindedness, playfulness, and skill in connecting with someone who is not like you.

In writing Sanctuary I wanted to convey these ideas of friendship, identity, and resonance. Autistic people are as human as anyone else – not ghosts, robots, changelings or aliens. But many of us like the idea of hanging out with them sometimes.

Sanctuary, by Andi C Buchanan (Robot Dinosaur Press) is available via the author’s website and can be ordered from Unity Books Auckland and Wellington.