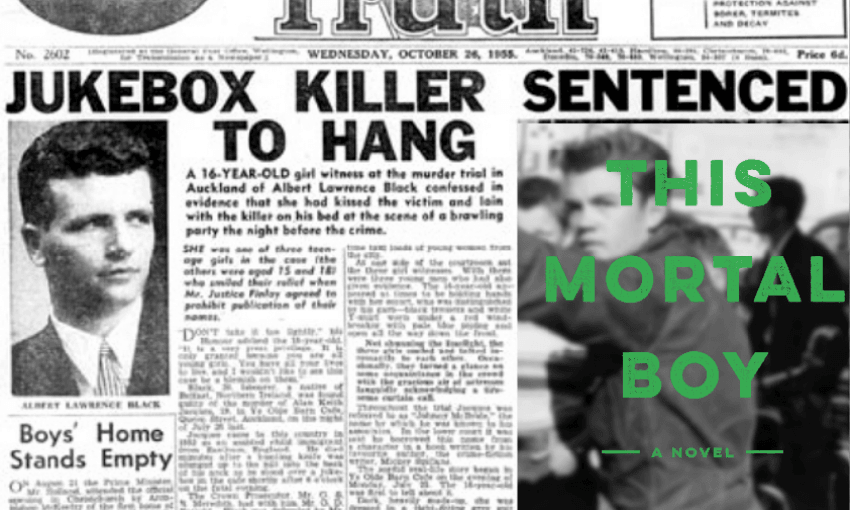 The second to last man to be executed in New Zealand

By Tina Shaw
Guest writer
Made possible by

Fiona Kidman is adept at casting her imagination into the past and bringing to life significant characters and times. She stepped back to the Sydney and New Zealand of 1834 in her novel The Captive Wife, while The Infinite Air reimagined the rise and fall of aviator Jean Batten. In her latest novel, This Mortal Boy, Kidman explores the story of the “jukebox killer”, as Albert Black was sensationally described in 1955.

Black was a mere 20-years-old when he was convicted of murder and then hanged at Mount Eden prison. He killed a man at Ye Old Barn cafe in Auckland by putting a knife in his neck. But it’s still unclear whether the murder of Johnny was premeditated or an accident.

The story is told strongly in Black’s favour. He’s a child migrant who sees himself as an outsider in New Zealand, yearning to be back in Ireland. During the war, it was just him and his mum during the bombing raids. He’s a good brother to Daniel, a good mate to his friend Peter. There are regrets that he didn’t turn away Johnny McBride when he had the chance. He falls in love with Bessie, a girl who looks like Grace Kelly. “He’d told her she was his girl, the only one.” And Black has plans for the future.

But mostly he’s portrayed as being young; as barely having made a scratch on the world.

Kidman sustains narrative tension as the trial moves on inexorably, an appeal hearing takes place, and Black’s girlfriend brings significant news to Black late in the piece. There’s a tragic inevitability to his story. It was a time when old ways were being challenged by the new and Kidman portrays the social climate of the 1950s as having clear demarcation lines: the older, traditional values on one side – as seen in characters such as Rita’s Dalmatian mother – and young people, so-called bodgies and widgies on the other. The infamous Mazengarb Report rears its ugly head: “Moral panic had seized the country as word spread of an epidemic of loose behaviour by teenagers.” The word “carnal” is bandied about. Condoms are banned for young people.

One might almost say that the narrow-minded and conservative attitudes that Kidman portrays during this period could lead to no other outcome for young Albert Black. There’s a sense that he’s a kind of scapegoat for a generation that authority figures simply don’t understand. In this respect, Kidman has taken the trial as a kicking-off point to delve into the social fabric of the 50s.

An engaging aspect of this novel is Kidman’s portrayal of the wide circle of individuals who are affected by Black’s conviction and trial. There’s Haywood, the prison supervisor, who has to prepare the condemned man. He should be at home with his wife but instead spends long evenings in his office drinking whiskey. “Once he had believed in God.” But God has obviously forsaken not only Albert Black but Haywood as well.

Black’s lawyer is similarly haunted. He looks at his grown sons and imagines how easily things can go wrong. “Once, he would have wished them to follow the law, as he has done, but now he hopes they will not. The law, as it stands at this moment, seems cruel and unjust.”

By contrast, Rita Zilich, who gives evidence at the trial, is a fairly typical teenager: “Her mother can’t imagine how hungry she is to feel alive.”

Then there’s the all-male jury, put up at the-then swanky Station Hotel on Symonds St – overlooking the railway station “like Grand Central in New York, as proud locals have it.”

Black’s parents, back in Belfast, must deal by distance with the news of their son’s terrible predicament. His mother Kathleen yearns to be with her son, but is discouraged by Minister of Justice Jack Marshall. The government doesn’t want a mother protesting her son’s innocence, and Marshall is a supporter of the death penalty: “Murderers, all of them. And, frankly, if you want my opinion, we could do without these deplorable migrants.”

It’s clear where Kidman’s sympathies lie, and her portrayal of Black as a youth who makes an awful mistake is a heartbreaking one. Her cast includes Black’s friends who were at Ye Old Barn cafe that night, and give varying accounts of the incident that took place. The muddled recollection of events is chillingly depicted. As the trial unfolds, and events of that evening are narrated, it’s obvious that the picture is a confused one.

And how much might the jury have been influenced by a newspaper report condemning the accused man? Kidman has created a fictional jury that also draws on her own experience sitting on a jury to show how entrenched attitudes and prejudices might lead to a young man being convicted of murder. It’s bloody convincing.

The courtroom scenes are also moving, especially the eloquent closing address: “You have before you this mortal boy, one who has made a mistake, unintended, but a mistake nonetheless, with terrible consequences.” The tragedy of the trial is that such an argument falls on deaf ears.

Meanwhile, back in Belfast, Black’s mother is collecting signatures for a petition for clemency to present to the New Zealand government. The community stands behind the family, but her effort comes to nothing in the end. Although the reader knows the outcome of this story beforehand, Kidman still manages to create the ghost of hope that somehow Black will get off after all.

This very human novel is as good an argument as you’ll ever find for the abolition of capital punishment.