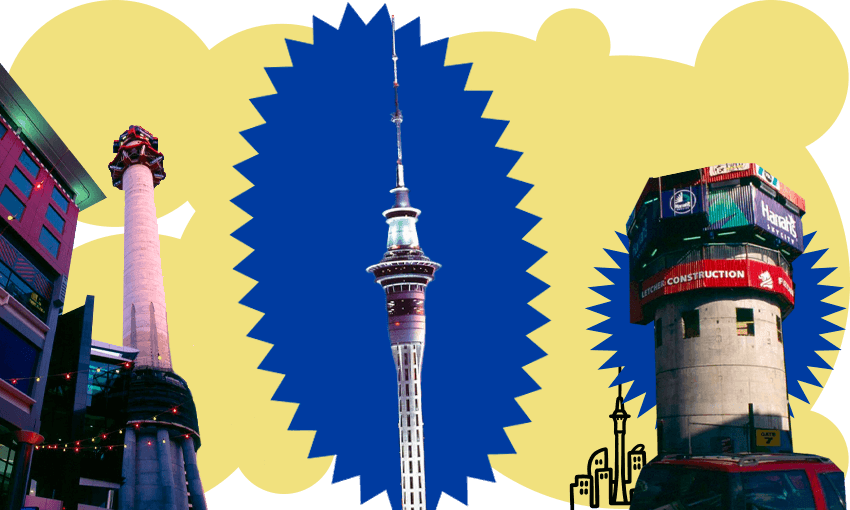 It took hundreds of staff, years of work and tonnes of specialist equipment to construct Auckland’s tallest building. Here’s how they did it.

In 1994, as work began on a massive $320 million inner-city complex in Auckland comprising a hotel, four restaurants, a theatre, a tower and, controversially, Aotearoa’s first casino, people had just one thought on their mind: what would an Auckland Sky Tower really look like?

“I don’t think they knew much about it other than a casino was coming,” says Gordon Moller, the project’s chief architect. He was down there every day, working with a team of 60 on breaking the mammoth complex down into much smaller “packages” – more than 100 of them – to make it more manageable.

They were on a tight deadline. “Sky City gave themselves an impossible time to build it,” says Moller. Beginning in early 1994, the plan was to complete the $320 million casino complex in two years, and the $69 million Sky Tower in three.

As diggers took over the corner site of Federal Street and Hobson Street, the first thing anyone wandering around Auckland would see is this: a giant hole in the ground. It didn’t look like much, but “it created a huge amount of interest,” says Moller. “They kept on pulling stuff out.”

Builders couldn’t go up without going down first. That meant digging six storeys down across the entire 150,000 square-metre site. “This is Waitematā mudstone,” says Moller. “It’s very good bearing. It looks hard but if you leave it out to air it fritters away. It’s not very good when it’s exposed to the air.”

The construction company the project had been awarded to, Fletcher Construction, thought they might have bitten off more than they could chew. Building the Southern Hemisphere’s tallest standalone building “seemed impossible” at the time.

“There were plenty of obstacles. Time, efficiency and quality of construction, innovative design concepts that would allow a 328m tall building to withstand 200km/h winds and resist 8.0 magnitude earthquakes, all provided challenges for our team to overcome,” Fletcher’s website reads.

“If that wasn’t enough, the brand new Sky Tower had to be designed to last 100 years with low maintenance requirements.”

Luckily, they caught a break. “We had the most amazing weather,” says Moller. “There was no rain.” That meant construction could go ahead unimpeded. Once the hole was dug out, framing went in for an underground car park, as well as concrete foundations, structural support and earthquake-proofing for the entire complex.

Work couldn’t start on what would become the Sky Tower, however, until the complex’s entire foundations were in place. To do so, a special 60 tonne jump form rig was built that allowed builders to “jump” four metres up every eight days. Concrete would be pumped up, poured, then allowed to cure, with specially designed holes that are still visible providing foundational support for the apparatus.

“We designed that to say that that’s part of the architecture,” says Moller. “It would get its claws hooked into the holes. You can see all of the bits that were used to build it are there.”

Thick concrete, massive steel – slowly, but surely, it started rising into the sky. “Each stage has a direct bearing on the next. It’s like a large and complex jigsaw puzzle,” Fletcher Construction project manager Warren Hollings told NZ Herald at the time.

Without anything to go on other than the simple pipe structure starting to stretch into the sky, Moller started to hear complaints. “People didn’t like the idea of the tower. People hated it,” says Moller.

“People thought it looked like a sewer pipe. [They said] it was intruding on the landscape.”

Facility services manager Bruce Stewart says he enjoyed coming into work every day when the Sky Tower was at this stage, exciting to get a birds eye view of the giant tower going up. “Even coming to work in the car, you’d look up and you’d see stuff happening,” says Stewart, who still work there and climbs the tower most days. “It was growing.”

Things really got interesting, says Moller, when they started adding on the levels to be used by visitors – three levels of fire safety space capable of holding 980 people, two viewing platforms, a cafe and a restaurant.

“I think where it got spectacular was building the pod, the curved bit,” says Moller. Balanced delicately on top, a crane helped continue construction, slotting pieces of the jigsaw puzzle into space.

Finally, on August 3, 1997, a completed Sky Tower was unveiled. Red carpet was rolled down Federal Street, celebrities showed up to party, and people finally got to see what Auckland looked like from 328 metres up in the air. From his office, Moller still sees his creation every day, a reminder of a time he built something that would have a permanent impact on Auckland’s city skyline. “I’ve got a bit of a thing about towers,” he says.