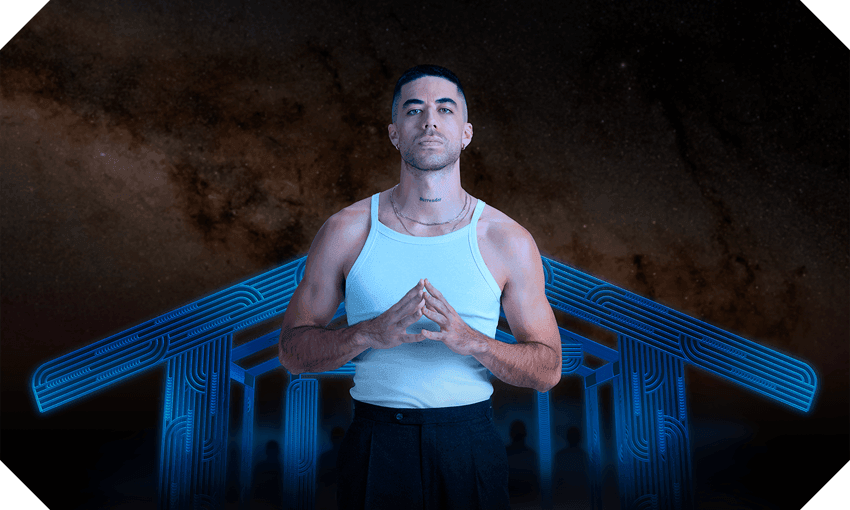 The Northland singer-songwriter is one of five artists spearheading Spark’s ‘Street Museum’, a 5G-powered collection of exhibits utilising augmented reality. Reweti Kohere asked him what it’s all about.

I have found the metaverse, tucked inside The Cloud, an undulating, slug-like events venue on Auckland’s waterfront. Spark rolled out its “5G Street Museum” here on Thursday, complete with food trucks, free drinks and the wizardry of augmented reality (AR) to marvel at. A version of an imminent future, minus any vegetarian hot dogs.

For the next four months, across the streets of Auckland, Hamilton, Wellington, Christchurch and Dunedin, the telco is offering New Zealanders a collection of exhibits powered by its fifth-generation mobile network, rendered in AR and co-created by five of the country’s best-known modern artists. The Street Museum is accessible via a free app and QR codes on the exhibit markers that you scan. There’s no need for a bulky virtual reality headset: the AR technology, which the exhibits are built upon, superimposes computer-generated imagery and video on your view of the real world.

Having a 5G-enabled phone will make for a faster experience, but you can still view the exhibits on a 4G connection – the virtual world might just take a bit longer to load. All you have to do is ignore the odd stares in public as you hold your device at eye level while meandering about, immersing yourself in the imagined universes of world-renowned choreographer Parris Goebel, alt-pop star Benee, rapper David Dallas, post-graffiti artist Askew One and soul singer Te Karehana Gardiner-Toi, better known by his stage name, Teeks.

It’s been over a year since the Northland artist (Ngāpuhi, Ngai Te Rangi and Ngāti Ranginui) released his debut album, Something to Feel, and five years since his maiden EP, Grapefruit Skies. Listeners know him for writing sad songs, and that same catharsis pervades his exhibit. Inside The Cloud, I make my way to his marker, pick up a smartphone and pair of headphones and learn I have to walk toward the virtual Teeks when he appears. I scan the QR code, wait mere seconds for the download and place a pin drop on the ground nearby. Immediately, I spot him, sitting cross-legged. As I walk a few steps in his direction, making sure I don’t accidentally walk into anyone IRL, a wharenui is erected around us, holding us as it floats among the stars.

In his deep baritone voice, Teeks finishes a karakia and says, “When I sing, it’s as if I’m opening portals to an ancestral realm…When I sing, I know I’m never alone.” The songwriter is on his feet as he starts to croon the first line of ‘Through It All’: “If this house should burn, can you stand the flames and watch it fall?” A one-on-one performance by a spectral Teeks, dressed in a white singlet and black trousers.

The exhibit ends in less than five minutes, and then I notice the corporeal Teeks, dressed in a similar white singlet, this time overlaid with a cream Gucci cardigan. I’m introduced to him and – because Covid is still around – ask if he feels comfortable to hongi. Of course, he says, and we press the bridge of our noses together.

Teeks tells me he started conceptualising the exhibit just before last Christmas, but work didn’t ramp up until February and March. Now launched, the experience of building a virtual world for the very first time was fun, he says, one that he gifts viewers by inviting them inside a “place of high ascension”, a whare wānanga. The singer wants people to see and feel his creative process, and to appreciate the culture in which he is rooted. The exhibit is a hononga with his tūpuna, Teeks explains. Māori performers understand it’s not just them on stage. “You have us in the physical realm, but also the spiritual realm.”

Whether it’s through haka, karakia or karanga, Māori know intimately what the spiritual realm feels like. But other than in our dreams, we can’t ever “see it”, Teeks says, finishing my sentence. Translating that sensibility with a limitless technology at his disposal was challenging, but the singer knew a whare wānanga cast in the celestial heavens felt true to his vision. “It feels like home,” he says.

He’s not opposed to incorporating more immersive experiences into his craft, but the situation has to be right. “As long as it works, it’s executed well and it comes across well. I don’t want it to get in the way of what matters – singing, standing on stage,” he says, having learnt from working with Spark that the more opportunities he has to create, the more he can trust his instincts. AR was a new, “intimidating” world, but Teeks made sure he was his full self and no one else when approaching it. “When you experience the exhibit, it’s very me. It’s very much who I am.”

Teeks’s exhibit is powerful, says Spark marketing director Matt Bain. “You connect with him in a way you don’t through a video.” The telco provided him and the other four creatives with the technological scaffolding from which they could build their worlds. “We said ‘leave the technology to us, we’ve got that bit. You think the unthinkable’,” Bain explains.

The future that 5G promises consumers may be exciting, and businesses may already be benefitting from the ability to transfer bigger quantities of data. But besides faster download speeds and low latency, there’s not a lot more it offers to ordinary smartphone users beyond what they already get with 4G. It seems the only advantage to 5G lies in these entertainment-driven use cases that try to drum up greater adoption, where telcos like Spark tap into the cultural capital of artists to make New Zealanders feel they need to be online a lot more, rather than needing it to make their lives easier.

In the near future, AR apps, much like the Street Museum, could conjure giant holograms of sports players and mascots, right there in a stadium with its own 5G network; tourists could witness giant moa roaming the whenua or the signing of Te Tiriti o Waitangi; and people could watch their favourite recording artists live right without having to leave their living rooms. Until then, New Zealanders can witness a virtual Teeks doing what he loves, being his best self. “When I sing, that’s when I’m ascending.”