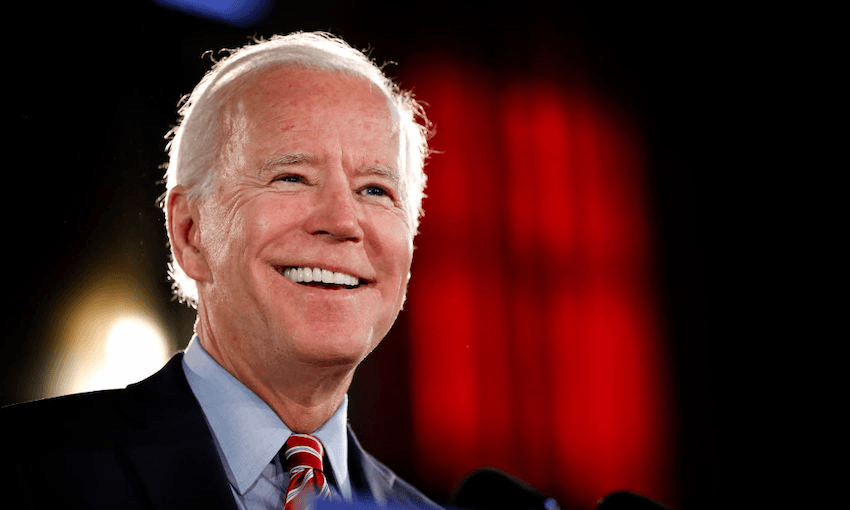 Then candidate Joe Biden lays out his economic policy plan during a campaign stop on October 23, 2019 in Scranton, Pennsylvania. (Photo: Rick Loomis/Getty Images)

Then candidate Joe Biden lays out his economic policy plan during a campaign stop on October 23, 2019 in Scranton, Pennsylvania. (Photo: Rick Loomis/Getty Images)

The candidate who was dismissed by many as the ultimate Democrat centrist seems set on making his presidency the most ambitiously left-wing since Roosevelt’s. Many in the Beehive will be taking notice, writes BusinessDesk’s Pattrick Smellie.

So much for “Sleepy Joe”.

As his first 100 days of leadership slide by, 78-year-old Joe Biden is emerging as a most unusual American president.

In a country where politics has increasingly seemed geared to and controlled by the so-called “one percent”, Biden is turning his attention to the other 99%.

“So that’s why I’m calling on Congress to pass the Protect the Right to Organise Act, the PRO Act, and send it to my desk so we can support the right to unionise.”

No one in a Labour-led government has been quite that clear in recent memory, although like Biden, the current Labour government has raised the top personal income tax rate on the highest-earning New Zealanders and has plans – currently not easily visible – to return to national bargaining in some industries.

Biden will face fights on both taxes and unions, but for the next two years, the Biden administration controls both the US Senate and the House of Representatives, and it’s clear that Gramps is going to go for it.

As time goes by, what seemed at first to be a dull but hopefully more competent administration than Donald Trump’s is showing signs, by American political standards, of being quite radical.

Spending very freely is the biggest sign of this so far.

As much as US$5trillion in new federal spending has either been committed or earmarked since Biden took office.

“There’s not much argument that the 2009 stimulus, in retrospect, was too small,” he told The Financial Times’s Martin Wolf in a late April interview. “It was 4-to-5% of GDP over a couple of years, so it was 2.5% of GDP in the first year, against a gap that was 6 or 7% of GDP and growing, so it was perhaps a third or half of that gap.

However, Biden is clearly leveraging the fact that Covid-19 has smashed the fiscal orthodoxy of the last 40 years. Fiat currency issuers like the US – or New Zealand for that matter – are being reminded that they can write cheques as large as they like, if they choose to.

There are very significant risks in doing so. Waste and excess are possibilities. So, too, is inflation.

But in a pandemic-ravaged world where inflation has disappeared from developed economies for more than a decade, Biden is showing every sign of becoming a standard-bearer for a new era in which fiscal largesse and big government seek to roll back the entrenched inequality and infrastructural decline that is afflicting so many of the world’s richest countries.

In doing so, Biden appears to be experimenting with a narrative that recasts the issues that animated the lost and angry middle America who voted for Donald Trump and giving them hope, rather than a crazy demagogue.

Notably, however, that narrative appears to be rooted in the same “America First” rhetoric that Trump adopted, but spliced onto a promise of more competent, steady, even conventional political leadership.

Where Trump caused mass anxiety and upset, Biden exudes calm and optimism while saying many of the same things that Trump said.

The latter may make the Biden administration a poor bet for a free trade agreement with New Zealand, let alone anyone bigger.

But for a Labour government here with a majority of its own, ballooning debt, a stalled pro-union agenda and infrastructure deficits requiring government debt-funded investments, the emergence of a decidedly left-looking US administration may create political space for action.

In effect, Biden is legitimising many of the bellwether elements of Labour’s approach that are causing parts of the New Zealand business community great concern. They see a lurch to the left, to higher debt, and to an activist government more willing to regulate and intervene in markets than at any time since the early 1980s.

In the US, Biden is attempting to rewrite the script on a US economy that remains the most vital and inventive in the world, but also brutal to those who fail to succeed in it.

Exploiting the break with recent policy orthodoxy thanks to the impact of the pandemic, Biden is making a clear play for a substantial swing to the left in American politics, believing that Americans will respond positively to a traditional Democratic message about American jobs and middle class economic security.

So far, it is working politically.

Biden’s favourability is far stronger already than Trump’s was at any time in his presidency.

A Reuters/Ipsos poll published last Friday found 55% approval for Biden’s early performance in office, reflecting near unanimity among Democrats, positive readings from independent voters and negative numbers from Republicans which could be far worse.

Immigration is the only issue he is doing worse on than Trump was.

Ironically, some of Biden’s approval rests on the unsung achievements of his predecessor. Against all odds, it appears the Trump administration’s “Operation Warp Speed” vaccine rollout plan was a good one.

It has delivered Biden more than 200 million vaccinated Americans within his first 100 days – twice the target he initially set. That can only have occurred because of what went before he was elected.

There is a poetic justice in Trump’s team doing something right but being so shambolic that the replacement team takes the kudos.

Because in the end, it’s Biden’s normality, the sense that the adults are back in charge, that America can lead again, that social media is a bit less toxic now that Trump can’t post there, which is most remarkable about the Biden administration.

Had that been all Biden achieved, it would at least have been a welcome respite.

Now, however, it is clear that he has a big agenda.

To the extent that the US suddenly looks more like a government that New Zealanders might recognise, Bidenomics may also embolden our own government as it heads down the fiscally generous, more interventionist economic policy track.

Whether the outcome is good economics is a debate for another column.

For now, what matters is that Biden is swiftly changing the developed world economic policy conversation, with a vigour and clarity that few might earlier have anticipated.