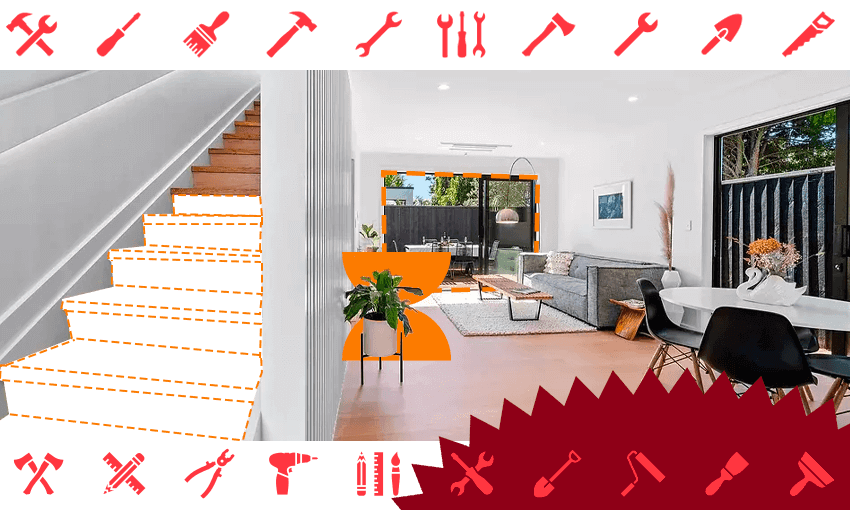 Inside Auckland’s building boom: ‘The next development could be the end of you’

Property prices are down and the cost of building materials is up. One developer admits it’s a risky time to be putting up townhouses.

“This is American oak stair nosing,” says Antony Fotheringhame. The tanned builder is standing on a staircase in a new four-bedroom home in Te Atatū Peninsula, brushing dust from the steps with his palm.

“Normally, you’d carpet down the stairs,” he says. Instead, he made the staircase out of wood to match the kitchen floors, then installed a custom handrail that lights up at night.

It took far more time, and cost more money, but Fotheringhame believes it’s worth it. “It’s the little things,” he says. “We try to do things different.”

In this crisp suburban family home, and the five others built on this 800 square metre site, no corners have been cut.

The kitchen is lit by a switch-glass window that allows residents to screen off living areas to outsiders at the push of a button. “It cost us way too much money,” says Ariki Fotheringhame, Antony’s wife and business partner at their company A&A Fotheringhame Builders. “We’re a bit over the top.”

Other developers would jam up to 11 properties onto similar-sized sites, often without room for cars or rubbish bins. But the Fotheringhames refuse to cut corners to make more money.

Their motto is: “If we can’t live in it then … we don’t want to build it. And we don’t expect someone else to live in it.”

This Te Atatū Peninsula property recently sold for more than $1 million. As they show me around, Antony and Ariki’s nerves are obvious. The developers invited The Spinoff to see what they do after reading this story that covered the incredible amount of development happening in the West Auckland suburb.

Fearing sticking their neck out, and citing pushback from residents, every developer approached had refused to go on record. After several tentative email exchanges, the Fotheringhames decided to have their say.

Why now? “We’re not like other developers,” says Ariki. Along with their two kids, the young family lives in the suburb, they both work here, and have family here.

If they make a shonky product, word’s soon going to get around. After two successful developments building townhouses on Neil Ave, they consider themselves among the good guys. They recycle old homes when possible, inform neighbours of upcoming construction noise, and guarantee their work for 10 years.

That’s not the case with all developers. Thanks to Unitary Plan changes, multiple development companies have snapped up dozens of sections across the peninsula, moving or demolishing original homes, then cramming in as many two-bedroom townhouses as they can fit. Residents fight for street parks and find inventive ways to dispose of rubbish.

It’s turned Te Atatū into a battleground between those who want the suburb to stay the same and those who see the benefits of a rising population. That argument plays out in daily posts on the community Facebook page and in conversations between neighbours, all soundtracked by the familiar background noise of construction.

Sick of the arguments, or worried developers are going to build three-storey townhouses next door, some have fled the peninsula to quieter parts of the country. The day I visit Ariki and Antony, I walked my daughter to school and ran into a friend. One of her first questions was if we were planning to move. As we talked, hammers and nailguns could be heard from a nearby construction site.

Antony and Ariki run one of the smaller development companies working in Te Atatū. They’ve finished two sites, and have three more on their books. Already they have first-hand experience of that tension boiling over. Recently, they were accosted by a resident who accused them of “ruining the community”.

“She’s lived here her whole life,” says Ariki, who can understand her point of view. “She’s mad that it’s changing.”

The Fotheringhames started developing two years ago, on a Neil Ave site across the road from the one we’re standing in. Sick of working for others, Antony decided he wanted to build for himself. They moved the site’s original house next door, built a home at the front, then lived in that while developing three more townhouses behind them.

One day, during construction, a competing developer paid them a visit. He asked Antony why he was only putting four homes on the site, then told him to sack his financial adviser. He thought he was crazy for not maximising profits by cramming in as many as possible. Visit any street on the peninsula and you’ll see examples of developers doing exactly that.

“We told him we care about the community,” says Ariki. “If we wouldn’t do it in our own community, we’re not going to do it in someone else’s community.”

Ariki recently gave up her job as a primary school teacher to work on the business full-time. With the housing market dropping and building costs going up, both admit that right now is not a good time to be a developer. Some products need to be ordered 18 months in advance, says Ariki. Banks won’t loan them any more money, and they’ve been forced to approach second-tier lenders. All of that sounds perilous. It is.

“It’s a massive risk,” says Antony. “If it wasn’t that risky, everyone would be doing it … the next development could be the end of you.” But the pair refuse to reduce quality to save on costs, even during a market slump. “We think quality speaks,” says Antony. “Even at a quiet time like this, we like to think a good product will sell and a shit product won’t.”People do seem to notice. I spoke to one potential buyer who recently viewed their Neil Ave site and was impressed by the attention to detail. “The work they produce is legit, and they involve you throughout the process … picking key design features like tapware and tiles.”

Yet the question remains: why has Te Atatū been targeted? The Fotheringhames say it’s not just this suburb. On recent drives to the airport and north to Red Beach, they were shocked by how many new developments they saw.

Despite the risks and the downturn in the market, development in suburbs is here to stay. “You drive anywhere,” says Antony, “and it’s everywhere.”