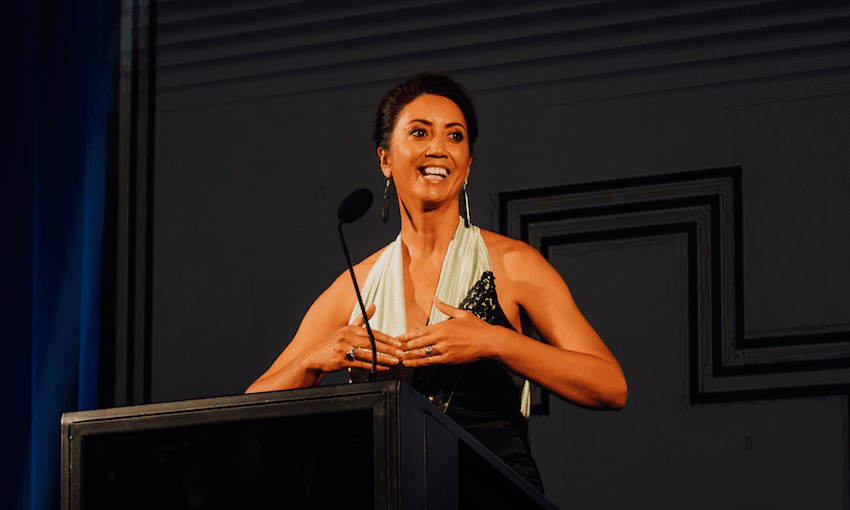 Miriama Kamo on what makes a great New Zealander

Last year journalist Miriama Kamo was named patron of the Kiwibank New Zealander of the Year Awards, and she has big plans for its future. She talks to The Spinoff about creating an awards programme that speaks to the diversity of Aotearoa.

Miriama Kamo isn’t one to run from her fears. The wahine Māori journalist, author and mother has dealt with loss in her life – from miscarriages to early menopause and generational loss of her reo, together with the challenges that come with being an indigenous woman in the media.

A judge for the Kiwibank New Zealander of the Year Awards for four consecutive years, Kamo (Ngāti Mutunga, Ngāi Tahu) was asked last July to become Te Koruru – the patron of the awards. At first, she says, she was surprised to even be considered.

“Here I was, being asked to be the patron, to take over from former prime minister Jim Bolger and guide the awards. I felt wildly unqualified,” says Kamo.

In the year since accepting the role, Kamo has become instrumental in creating a culture of change at the awards. Her mission is to ensure the awards embrace the cultural diversity of Aotearoa and provide support for the finalists and winners.

In her patron speech at this year’s awards, Kamo described the people acknowledged by the awards as pillars that represent what it means to be a New Zealander. She refers to them as pou, the Māori word that captures the way someone strongly supports a cause or is a symbol of support for a community.

“As a person, a pou is someone around whom we can gather, for wisdom and for inspiration, for courage and for leadership. Someone who, by their deeds, tells the story of who we are as a country.”

To truly honour those pou, Kamo has big plans for the future of the awards under her patronage, establishing a pastoral care model to look after the nominees and winners and create a formal alumni network.

We spoke to Kamo to find out more about what the New Zealander of the Year Awards represent, and what their future looks like in an ever-diversifying Aotearoa.

Make your voice heard by nominating in one of the seven award categories at www.nzawards.org.nz by 31st August.

How did you become involved with the New Zealander of the Year Awards?

I was invited to become an executive judge for the awards. As a storyteller, it really appealed to me. The people we honour and acknowledge at these awards have the most amazing stories. They are inspirational, service-driven people who have often fought against the odds to achieve what they have. To be in a position to hear those stories and know who is out there doing incredible things was just a no-brainer for me.

What is the significance of these awards?

These awards are important because they recognise the diversity, the beauty and the differences in who we are. We have a diverse and incredible range of people that live here and they should be recognised and acknowledged as New Zealanders and as contributing members of our society. Every nominee is driven by a deep sense of service and that service is what we want to honour. We see these awards as being for all communities of our country.

What does being a patron involve?

Having been a judge already, there were areas of the awards I wanted to see improved. It was a really wonderful opportunity to see those ideas enacted. We have had to ask ourselves hard questions such as what is New Zealand and who is a New Zealander? Who are we aiming to honour and to what end? How do we activate in all communities, so that all New Zealanders feel included and able to be nominated in these awards? Many of these questions are hard because they go to the heart of our identity, of our belonging, and of our right to be here. They are questions which very often evoke fear, but I’ve learned as a journalist and from our nominees that it’s looking into, rather than away from what frightens us, that helps us to overcome fear and to succeed. The whole story is always the best story, with all those messy, inconvenient bits – in fact, it’s those dark corners where the best story often lies. So, for me, the role of patron is to find where we can step more fully into who we are, to reflect our values, and to help guide the awards into a full expression of that.

What are some of the ideas you are implementing?

I wanted to institute a pastoral care model. When people are given these honours, it is an honour but it can also be a burden. People need to feel supported to be able to embody that role because it’s a big responsibility. I wanted to make sure all of our winners and finalists felt prepared, able and supported in taking that journey.

We also wanted to put a partnership lens across the awards and make sure they were embedded in Treaty principles and the agreements we made as a country… Part of that was to institute te reo across our awards materials and names, for example, the name for the patron is Te Koruru.  All our names were gifted by my incredible friends and reo mentors Pānia Papa (Ngāti Korokī-Kahukura, Ngāti Mahuta), Leon Heketū Blake (Tūhoe, Tūhourangi, Ngāti Wāhiao, Ngāti Porou, Ngāti Whāwhākia, Taranaki, Ngāti Kahungunu), and Dr Karena Kelly (Ngāpuhi, Ngāti Hine).

We have also begun building an alumni network for all winners.

What are you hoping to achieve with the alumni network?

We invited them all [past winners] to the table and asked them to help us to build this alumni network. We asked how we could continue to have a relationship with them and how we could best support them and their mahi. The alumni network has agreed that there will be a mentoring aspect to what we are doing, to ensure that people coming into this space are supported. And some of our alumni have started working together and developing kaupapa together. A really important part is making sure that [the winners] feel like what we’re building here is actually going to help them and enhance their mahi. We want to create something with them that provides a platform for their mahi, celebrates and helps shine a light on what they’re doing, and creates opportunities to work together.