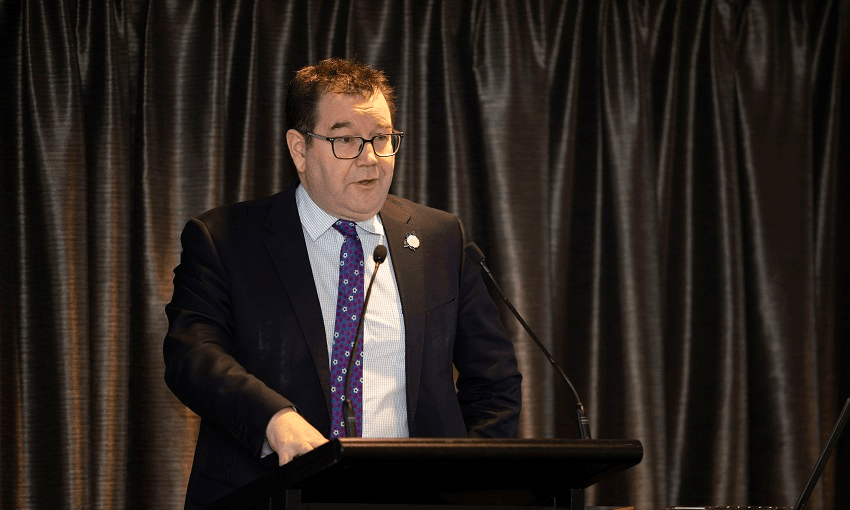 Strapping in for the fourth industrial revolution

Kerri Jackson reports from a future of work seminar and concludes that the good news is, with revolution comes huge opportunity. The bad news? The starter gun’s gone off and New Zealand business is still milling about.

We’ve all had those heated dinner party discussions about whose job will soon be handed over to the robots, and rolled our eyes at the denial of those who insist their job “needs a human touch”.

But what are we doing about it? What skills will we need and how will we get them? Will jobs as we understand them now even exist? How can businesses prepare for a fourth industrial revolution (that’s Industry 4.0 to the insiders) that’s almost upon us, when they don’t yet know exactly what it looks like?

These and other potentially prickly questions were up for debate at The Purpose and Future of Work Seminar, held in Auckland on Friday. It featured Finance Minister Grant Robertson with a panel of some of the country’s leading tech innovation names, including Tech Futures Lab founder Frances Valintine, Spark managing director Simon Moutter and Kiwi Landing Pad director of community and content Sian Simpson.

Their verdict: the good news is, with revolution comes huge opportunity. The worry is the starter gun’s gone off and New Zealand business is still milling about doing its stretches.

Where do we go from here?

For Robertson, the key lies in having key institutions that are “strong, relevant and nimble” and able to back up business. It’s among the reason the Labour government is reviewing everything from The Reserve Bank Act and the tax system to, crucially, education.

“Every single conversation about the future of work ends up back to our ability to train and retrain to be adaptable to requirements,” Robertson told seminar attendees. “For a workforce that has those skills we have to look to our current education system, but also at how we train and train in the workplace; what we traditionally call active labour market policies. It’s something New Zealand has not been good at and it’s critical to transitioning to the future of work.”

Key to the focus on skills and training is the Future of Work Tripartite Forum, between the government, unions and industry.

“We need to take a sector, look at the skills needed for that sector and create a plan to meet those skills needs,” Robertson said.

That’s already produced a pilot programme from The Manufacturer’s Network, addressing the skills shift needed in that sector to meet the challenges of automation and artificial intelligence.  “We need to take that and replicate it in other industries.”

It’s similar to a programme rolled out by Siemens, a co-sponsor of Friday’s event, in Australia. There, Siemens has funded a $2 million apprenticeship programme in partnership with a university to meet the massive STEM skills shortage by allowing trainees to earn while they learn with access to cutting-edge technology.

Another training tool in the government’s kit will be “micro credentials”: short, flexible courses of six weeks that will allow workers to retrain in new technology or new skills quickly and efficiently. As Robertson said: “People just can’t take six months or three years off to retrain, especially in a fast-moving sector like manufacturing.”

For France Valintine, the skills’ problem goes deeper. “When you look at the education system tech is not seen expansively. It’s still very narrow.”

“It should be integrated into our medical degrees, our engineering degrees. It should be equally taught in our hospitality and tourism programmes. It’s baseline knowledge and we have to have it in there.”

The other training vacuum in the Industry 4.0 conversation at the moment, says Sian Simpson, is around the jobs that are being created and the skills they require.

“I talk to university students and they say ‘but all these jobs are disappearing’. Nobody in New Zealand is talking about the jobs that are coming online. Jobs like community managers or product managers or content marketers; quite basic roles that businesses can’t find people to do because the training doesn’t exist.”

They’re prime roles for businesses to repurpose people into who may have lost work to automation, she said.

Thirst for the diverse

Exposure to knowledge and experience are also proving to be key tools in retraining staff, particularly at Spark which is undergoing a massive structural overhaul to the much-debated ‘Agile’ model, which sees staff work in cross-disciplinary squads instead of hierarchical departments.

One almost immediate impact that’s had is in maximising diversity, said Simon Moutter.

By melding the staff into squads, that diversity because much more visible. “Previously IT staff might only associate with each other. Now there might be two in a squad,” he said, explaining that the new set-up has not only enabled to exposure to different ideas, but that squad members are also learning from each other by working together.

Valintine added that diversity of age is also increasingly vital for business success.

“We have to understand this new world and integrate young people among our teams. This digital world is the only one they’ve known, they get it. We do need experience but we also need high-end capability.”

Robertson may have touched on the need for a new work model to be backed up by nimble and resilient institutions which can support business and individuals in the Industry 4.0 world, but for Sian Simpson, the banking sector particularly needs to get on board.

Despite the gig-economy increasingly becoming the norm, particularly among millennials and 20-somethings, traditional thinking by banks is holding them back when it comes to life requirements like credit and mortgages. Banks want to see regular and handsome salary amounts flowing in.

“It even happens to me and I work with several banks. They tell me they don’t understand me.”

“When I talk to people about Auckland in ten years’ time, they immediately fall back on imagining what a linear process might produce or talk about the constraints of the building act or the council, instead of thinking about what they’d love to be and how to get there as quickly as possible.”

The future is bright

So the key message here is that Industry 4.0 is coming; it’s coming fast and it’s coming for everyone. Robertson pointed to research by McKinsey and Company which said the revolution was happening at ten times the pace of its predecessors and at 300 times the scope. No business will be left unaffected.

It’s why KiwiRail organised and co-sponsored the seminar. Outgoing CEO Peter Reidy said he’s been asked why KiwiRail is concerned about the changes as a very traditional, non-tech company. He said he’s keenly aware that his workforce is ageing, and the company will need to upskill and attract talent to keep pace.

Key to that, he said, will be purpose. “People will want to work for organisations that have a reason for being, bigger than themselves.”

For Robertson, the crucial message about revolutionary change is that businesses must be active in approaching it rather than be passive. “We can be in a position where we can achieve greater productivity with greater fairness. If we take a passive approach we run the risk of growing unfairness and insecurity.”