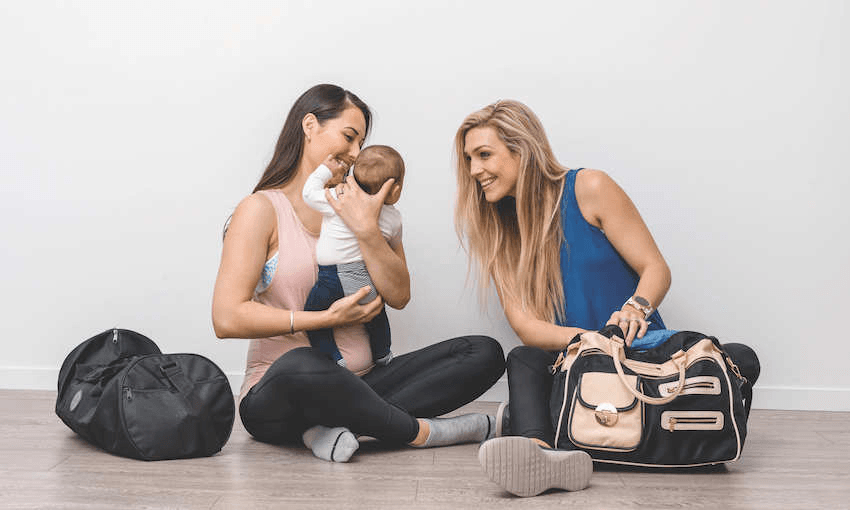 The Kiwi business making activewear for new mums around the world

After giving birth to her first child, personal trainer Niki Clarke discovered there was nothing for her to wear to the gym to accommodate her changed body and desire to breastfeed. So she decided to do something about it.

In 2013, Nikki Clarke and her husband Adam were expecting their first child. They’re both personal trainers, and the pair lived highly active lifestyles. But when their baby girl Caden was born, Nikki despaired over the lack of activewear catering to nursing mothers’ needs.

“I remember sitting on my couch and thinking ‘I’ve got no clothes to wear, I can’t go to the gym!’. It was really quite an emotional time.”

Not wanting to give up her healthy and very mobile lifestyle, Clarke decided to take matters into her own hands by creating a company that provided activewear and nursing sports bras for new mums. Now, five years since her daughter was born, her activewear company Cadenshae has warehouses in New Zealand and Canada, a big market in Australia, and its sights set on the UK.

Clarke had no experience working in fashion when the idea for Cadenshae struck, but her personal experience and knowledge that many women would be experiencing the same thing meant she didn’t let that stop her. First she sought out suppliers for the clothing. After narrowing the list down to three, Clarke started pitching design ideas and getting samples from each supplier, sending her designs “back and forth, back and forth just to make sure I was getting the garments absolutely perfect.”

It took 14 months before she was happy with the product. Four days before the first shipment of Cadenshae clothing arrived at her doorstep, she gave birth to her second child. By 2016 Cadenshae had won Best Emerging Business at the Westpac Northland Business Awards. Judges cited the business’s “clarity of focus, the passion, clear business processes, the developing global distribution network and the phenomenal early growth” as reasons for the win. It’s this passion and focus that has seen Cadenshae double its revenue every year it has been in business.

From its local beginnings, Cadenshae’s activewear range – currently standing at 23 products – is now available worldwide from their online store. Since day one Australia has been its biggest market, “which is funny because you’d think New Zealand would be”.

But it’s not just our trans-Tasman cousins who are loving the brand. Its popularity in Canada prompted Clarke to set up a hub there; as a result of import taxes, she now has her sights on opening a similar warehouse in the UK.

Import taxes affect a lot of Kiwi businesses trying to expand into the UK, according to Kiwibank senior business manager Clarc Morris. He says setting up a hub is a great idea, but expanding into the other side of the world is not always easy.

Morris says companies not wanting to organise an overseas warehouse “need to be able to adjust their cost structures so the additional cost of purchasing over there doesn’t place them out of the marketplace”. Because Cadenshae is one of the only brands reaching into the new mum market worldwide, its popularity overseas has justified the bricks and mortar overseas expansion.

Clarke knows first hand how stressful and overwhelming motherhood can be, so she’s emphasised the importance of customer service as she looks after new mums worldwide. She is, after all, in the business of making mums’ lives easier – “as a mum I know what it’s like”. Cadenshae offers free returns for New Zealand and Australian orders, and goes out of her way to ensure satisfaction with fit and comfort.

“If our customers buy something and it doesn’t fit, we’ll send them a bunch of others to try and they just send back what they don’t need. Our customers mean everything to us so we really try to bend over backwards,” she says.

For market research, Clarke relied on her personal networks of mums and trusted that their experience would be reflected around the world. Having opened up on Facebook about her own experience as a new mother trying to stay fit, the online response was enough for her to know she had to follow through with the idea.

“I had so much feedback from mum friends saying ‘oh my gosh, that’s such a good idea, I wish this was around when I had kids’, or other friends who weren’t pregnant and said ‘oh my gosh, I want to get one when you make them’.”

Kiwibank’s Morris says a gut feeling is the perfect initial drive towards starting a great business. But he admits that Clarke was very lucky that her own network of friends were representative of a wider market.

“Typically market research should be paramount in making sure there’s a market, both immediately and ongoing, and to understand exactly what the level of that market is so you can create your business not just for the immediate need but also for future needs,” says Morris.

He says market research doesn’t have to be complicated. He says looking at close competitors and figuring out the gaps they miss is an easy way to see where a new business can fit. Clarke was lucky to identify a huge gap in an important demographic, and was able to reach new mums looking for activewear before anyone else.

“Social media now is the easiest way to create quick market research and give you that information and then from there you can do more directed secondary research,” Morris says.

As the customer base and stock diversifies, the Cadenshae team has also been growing, and finding staff to facilitate that growth can be one of the hardest things for a small business. Here Clarke was again very lucky. Her parents and in-laws take care of packing for shipment, and she’s hired two new staff for logistics management and customer service, leaving Clarke and her husband Adam with time for their now family of six – and to continue to develop the brand.

”For so long I was doing every little thing,” says Clarke. “But we’re still a pretty small team for the volume of stuff we’re pushing out.”

Morris says bringing family into business can be both a good and bad thing. But as long as there’s trust and good communication, involving family helps create an “enthusiasm, buy-in for the brand, and engaged passion across everybody involved.”

While there’s an ever-growing stack of books and advice columns ready to tell entrepreneurs all the do’s and don’ts of starting a business, Clarke says she had to learn to trust her own instincts. It’s a philosophy that Clarke still lives by today: “I knew that if it was a problem for me it would be a problem for a lot of mums.”

“You know what’s best for your brand and know that money isn’t everything and making people happy and being a good person and treating your customers with respect is really important”.

While the initial success of Cadenshae was built from Clarke’s own experience, further growth has come from listening to the needs of other news mums. Taking into account feedback from many current and prospective customers, she has another product in the works: a sports bra that will go up to a K cup.

“There’s not much on the market for mums that have really big boobs, so we’re trying to develop a bra that’s going to solve a problem for lots of mums.”

It’s been a successful three and a half years for Clarke, and she’s created a business that has positively impacted the lives of many new mothers. She says she takes pride in every story from a mum who’s been helped by her products.

“It’s more than clothing. It’s not just fashion. There’s clothing, and then there’s a piece of clothing that can actually make your life better. We get so many messages from mums who say ‘I was having trouble breastfeeding, I was really self conscious, I nearly gave up breastfeeding my baby but I got some of your clothes and I ended up feeding her for six months more than I would have’ and that’s really special because you’re affecting a baby’s life as well.”