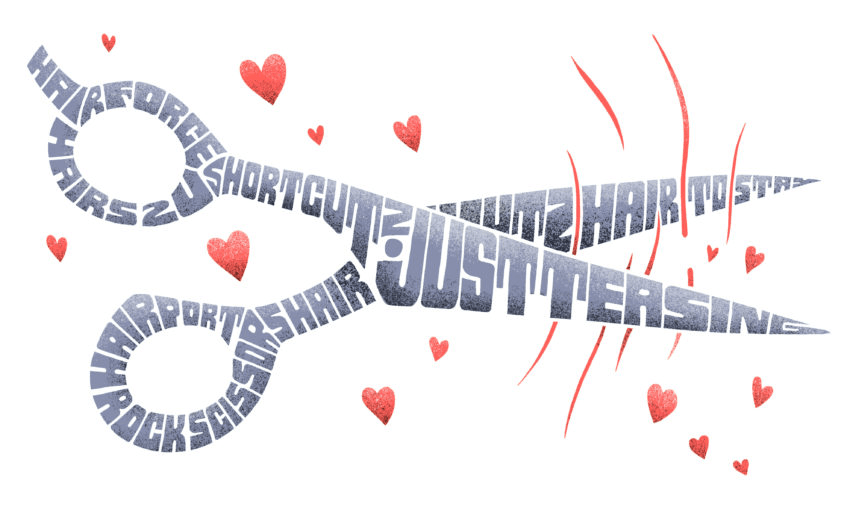 From hair to eternity

A decade ago, a linguistics lecturer named Martin Paviour-Smith published seminal work for Massey University’s Linguistics Department, on what was then known as a “blog”. The subject: linguistic strategies used in hair salon names in the Manawatu.

Puns were predictably popular. Twelve percent of all shops were named things like Cut Above, Upper Cut and Hair Force. Shockingly, on account of Palmerston North’s undisputable civic passion for snazzy spelling – Shadzz Motel, I’m lookin’ at you – Paviour-Smith found that fewer than average salon names (11%) used “creative orthography”, or made-up spelling, though Phixx was one outstanding exception.

More popular, at 14%, was the name of a living person. Just over 10% opted for what Paviour-Smith calls the “glamour” strategy: evoking high-society classiness via references to lords and ladies or European languages (Palmerston North was exclusively French: La Patrie, Travail D’Amour). And a decent 6.5% of salons chose names that suggested winning and/or being awesome, like En Success.

In 2019, we find the linguist in Switzerland, where he enjoys posting beautiful photos specifically to make me jealous. Happily, up in the Swiss parts, folk are just as keen on hair salon puns. Not only that, they can pun in five languages. Paviour-Smith recently contributed a chapter called “Cutting across Linguistic Borders? Interlingual Hair Salon Names in Plurilingual Switzerland” to a collection called Crossing Languages to Play with Words.

The man knows his goddamn hair salon puns, that’s all I’m saying. So I swept together some of the best names in New Zealand, styled them into a list, and asked Paviour-Smith for his most cutting linguistic assessments.

For hundreds of years, puns have been marginalised as the scum of the humour world. But to me, this one is profound in its simplicity. Paviour-Smith agrees. “This is a classic pun – technically defined as humour derived by directing the listener or reader to the ambiguity of a wordform. Obviously this one works on teasing – its two meanings ‘to mock’ and ‘to comb hair towards the scalp’. The humour is enhanced because the entire phrase ‘just teasing’ is collocational – that is words that we expect to hear together.”

As everyone knows, a Z anywhere in a name adds a layer of sophistication that money just can’t buy, which is why our countryfolk return to this motif again and again and again. It’s “super super super common”, says Paviour-Smith, and soundwise, makes perfect, beautiful sense.

There’s the Z as possessive, as in Debz and Melz, both in Hamilton, or the Z as plural, as in Hedz for Hair in Wainuiomata or Sophisticutz in Nelson. There’s the combo deal Julz Cutz in Tauranga, which Paviour-Smith tells me I should totally go to. And he cites another popular spelling change, C to K, which is further enhanced when in cahoots with a Z: see Short Kutz in Elgin, Top Kutz in Invercargill and the heavenly KutzPluz in Rotorua.

For me though, quite aside from the z, there’s a clear and ingenious play at work here on Alley Cats,  the 1966 German adult film about which GJ Paris comments on the Internet Movie Database: “This campy sex-romp takes place in some European city where everyone appears to be sex crazed and speaks with a different accent.”

There are variations on this theme, like Hair Craft in Nelson and Hair Force in Palmerston North, but this one’s better because it makes less sense. Why would there be a port for hair? That’s just stupid.

Paviour-Smith clears it up: “I love this novel compound. The forms hair and air are paronyms – near homophones or near homographs (in fact the superformal name for puns is paronomasia with the same root as paronym) so the novel compound is paronymous with airport.”

I have a soft spot for this one. Not only does it allude to the accoutrements of haircutting, it takes me back to the Jurrassic era, when we didn’t need haircuts because we hadn’t been invented yet.

Paviour-Smith is less impressed: “I actually find this one hard to say. The rhythm of tyrannosaurus rex is different because the stress falls on the second syllable of the dinosaur name but scissor has word initial stress.”

Sure, you could be like all the other salons and call yourself Rock Paper Scissors. Not this place. “Haha this is almost a garden path structure – where what you hear leads you to a false prediction of what you will hear next – but also doubly clever exploits the inbuilt industry reference in the name of the game.”

Urenui is a sunny vale of 429 folks in northern Taranaki where German is spoken and avocados are grown, and how could the citizens not be content living in a place that can be translated as “ginormous penis”?

I adore this salon name because it conjures a wild country music brothel ruled over by Dolly Parton, who is secretly having an affair with sexy sheriff Burt Reynolds. Except at this establishment, instead of whores, hairdressers would be inside, ready and willing to snip off your split ends.

Hurtfully, Paviour-Smith says this one only makes sense to a certain demographic. “This one really relies on pop culture knowledge (of the 1982 masterpiece Best Little Whorehouse in Texas). You probably have to know the movie title to get the pun and know that whore has been replaced by hair – a near homophone. I wonder if this is appealing to a certain age group?”

In Paviour-Smith’s opinion, this name could be considered a national taonga. Not only does it refer to a distinctly Kiwi pastime, but it only makes sense in our accent. “One of the distinctive features of our dialect is the so-called air-ear merger. In other dialects there are distinct diphthongs in the pairs here/hair, beer/bar, near/square. Most speakers of New Zealand English have merged them so they pronounce them all with the diphthong in ear.”

Other examples include Hairs 2U in Whanganui, Hairsay in Levin, Hair to Stay in Wainuiomata and the very wonderful Hairo’s in Palmerston North. “People used to write into the newspapers about the dreadful horror of such pronunciations but now most of the population do it.”

To me, the perverse beauty of this name is that it chooses to spell “sharing” in a way that makes it less about scissors (shearing) and more about therapy (sharing), although, in all fairness, therapy probably is what a lot of people really want when they go for a haircut.

Yet Paviour-Smith has questions. “What is interesting to me is whether the idea of being treated as a sheep is not a negative one? Or are they also making reference to the supposed intimate relationship between hairdresser and client?”

Well, thankz for reading our list. Inevitably, there are many salons that we don’t even know about, in which case, please contact us.

And if you’re a salon thinking up a new name, please bear this advice in mind from Paviour-Smith: “It surprises me that hair salons of New Zealand don’t seem to make use of te reo. You could make brilliant names for salons from Māori lexical items – the term kutikuti has a number of meanings: ‘to shear’, ‘to open and shut continuously’ and double-bladed items like scissors and shears.”