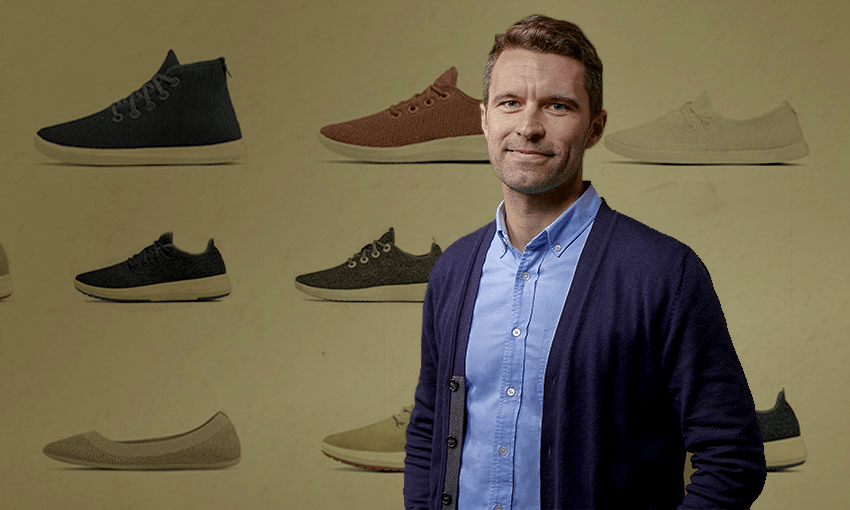 Allbirds was founded six years ago by New Zealander Tim Brown as a direct-to-consumer seller of Merino shoes; now the eco-conscious brand is gearing up to list on the US stock exchange at a valuation of $2.4bn. Last year Duncan Greive spoke to Brown about the company’s future plans – and why it puts each pair’s carbon footprint on the shoe, so no one can miss it.

“We’re right in the deep darks at the moment.”

Tim Brown, former All Whites footballer and co-founder of Allbirds, is sheltering in place, having left his home in San Francisco for a house out of the city with a little more room for his young children to roam. “We were in the scenario where we were told not to worry,” he says. “Very, very quickly – seemingly overnight – it went from ‘don’t worry’ to like, ‘this is the end of the world’.”

Covid-19 has hit the Bay Area – where Allbirds is based, and which covers San Francisco, Silicon Valley and the surrounding counties – harder than most. Currently it lists 5,000 cases and over 600 deaths. It’s still on the brink, but San Francisco mayor London Breed has drawn praise for her leadership.

After the health crisis abates, an economic one looms. While many US businesses have already begun slashing staff, with an astonishing 16 million registering for unemployment benefits in just three weeks, Allbirds has committed to retaining all its staff through July at least.

“We’ve been conservative in the way that we’ve built this thing,” says Brown. “Not that we ever imagined something quite as dramatic as this would happen. But that if it did, we’d be prepared.” It’s not just resolving to get through it – despite the crisis, Allbirds is pushing on with a bold yet risky move, years in the planning to aggressively publicise its carbon footprint.

It might seem an act of pure folly to launch any initiative, let alone one which has the potential to turn customers off, during a time when much of the business world is concerned simply with surviving. Yet Brown believes that climate change is a challenge of a scale which demands action, even in the midst of a crisis.

“Millions and millions of people are being made unemployed here in America and it feels like that is the focus right now,” he says. “There is a short term situation where there is a potential for an enormous loss of life.” When asked how this might change people’s outlook, he initially demurs (“It’s too soon”), but entertains the prospect when pressed.

“It’s hard to speak beyond it, but if you did, I think you might base your feelings on a couple of things,” says Brown. “I think in a very simple way [due to Covid-19] you understand we’re all connected. The idea that you have all of these countries everywhere in the world experiencing the same thing is pretty remarkable.

“For extraordinarily complicated challenges like climate change, that are too easy to try and put behind geographic borders, you might back the case that there’s a much better climate to actually tackle that type of challenge.” He cites the example of Roosevelt and Churchill coming up with the idea that became the United Nations in the depths of WWII as an example of how humanity can find solutions to seemingly intractable problems while under its greatest strain.

Beyond the virus sits yet another challenge. One of the chief problems Allbirds faces is one common to all businesses: that faith in the engine is way down. Myriad stories piling up over decades, from big tobacco to the opioid crisis, from inequality to the GFC, from Cambridge Analytica to Deepwater Horizon, have fundamentally shaken the belief, common in the 70s and 80s, that business is fair and well-intentioned. As with the cost of climate change, distrust of corporations is an invisible tax which erodes good and bad actors alike. There’s a sense common amongst many, particularly younger people, that even those businesses which present as well-intentioned are up to no good. Even a move like this isn’t going to be enough for some.

Despite that, Allbirds starts with an advantage. It’s a young company, so doesn’t have the baggage of competitors like Nike. And despite its gaudy valuation (US$1.4bn – NZ$2.4bn – at last funding round), its founders don’t have the scent of megalomania on them which pervades the likes of Amazon and Tesla – which engender deep suspicion, despite their CEOs making some of the largest pledges to fighting climate change of anyone in the business community.

Allbirds’ origin story remains its most powerful defence against those who might doubt its leaders’ motives. Brown had been tinkering with footwear for years, launching and folding ToBe, a line-up of cleancut leather sneakers while still playing professional football. It fell apart, but Brown was stubborn, and kept playing with the idea of innovating in footwear.

“I remember reading a Metro article one day about the wool industry, and how it was sort of crying out for innovation and had been in decline for a long period of time,” he says. “With the help of a friend, we wrote in and got a grant to create a material made out of wool for use in footwear and this thing got accepted.”

After years plugging away, things moved very fast. Since its launch in 2015, the shoe has become part of the uniform amongst the eco-conscious Hollywood and Silicon valley sets, ending up on the feet of actor/investor couple Mila Kunis and Ashton Kutcher, Google founder Larry Page and Leonardo DiCaprio, who loved them so much he bought into the company.

Earlier this year, it announced that it was imposing a carbon tax on itself, using the proceeds to fund wind farms and reforestation projects. In and of itself, this was a progressive but not pioneering move. Yet the latest is a step-change: from today onward, all new pairs of Allbirds manufactured will note the complete end-to-end carbon footprint. As of now, that’s around 7kg per pair.

“We think it’s the new scorecard for the environment.”

The company offsets all those emissions, but Brown views that as a bridge until they reach net zero. He even allows himself to dream a little bigger. “The holy grail is negative impact.”

It’s a category leading move, but freighted with risk. Allbirds is a prototypical modern business – innovative materials, direct-to-consumer, sustainable from day one. But it’s asking a lot of its customers to have them look at 7kgs of carbon and think about what that means. About whether they really need those shoes, at point-of-sale. Brown’s eyes are open to that, and his motives have an air of mission.

“This is an emotional problem,” he says. “I feel it in my heart. We need to shift quite quickly to this being quantifiable; this is being objective and this being understandable, so people can make more educated decisions in the way that they live their life.”

For all that, he also makes a business case. Brown says that Allbirds is of the belief that true carbon accounting, and a carbon tax, is coming one day. And that those who focus hardest on knowing exactly what they emit and minimising it will be best placed to thrive when that day comes.

This is not a small shift for Allbirds. For years, it has traded off a neat line, which at once burnished its environmental credentials while downplaying their significance to its success. ‘People don’t buy sustainable products, they buy great products’, they repeated ad nauseum. No longer.

“We’ve updated that language,” says Brown. “For a product to be truly great it must also be sustainable. I think the expectations are shifting. It was, give or take, two years ago when Greta Thunberg took off school on a Friday by herself and started protesting on the steps of Swedish parliament. It’s crazy to think how recent that was.”

Ultimately, Brown believes that all other definitions of sustainability, and concerns about it, are built on the resolution of climate change. He’s starting to acquire the single-minded focus on the issue of certain politicians and the climate strike leaders, joining a tiny handful of business leaders – Phillip Mills of Les Mills is another – who sound like activists when they talk about the issue.

“All of these definitions of sustainability – they matter. But they must ladder up to a singular idea that carbon is the scorecard that unites all of us. It’s the way of accounting for environmental impact that will both get us out of, or get us further into, this situation.”

This day, one on which they start printing the true environmental cost on their products, is something of a landmark in Allbirds’ trajectory. The moment when it definitively shifted from a focus on materials to something larger – and a belief that despite the current crisis, and all that has happened to shake faith in business over the past decades, it retains both the potential and the moral imperative to evolve into something better.

“Every industry needs to rally behind it,” says Brown of fighting climate change. “It knows no borders. It doesn’t know categories of business… everything has to be secondary to the idea of carbon.”