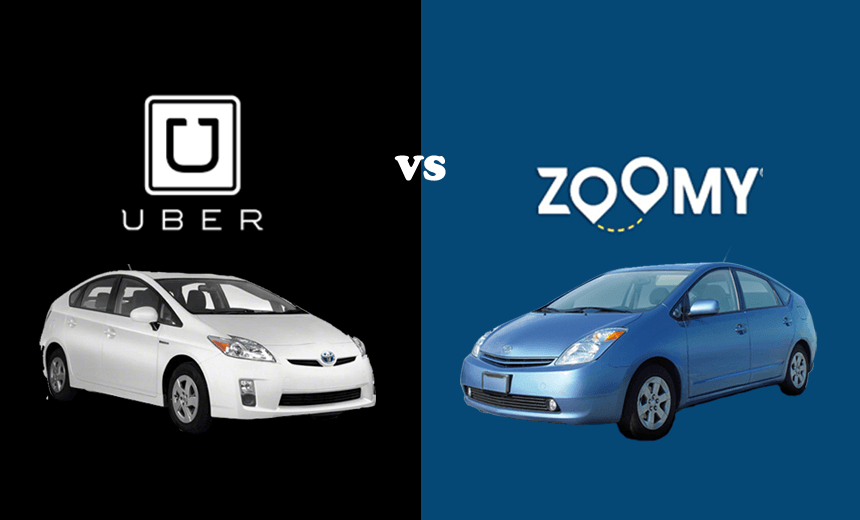 The great Uber vs. Zoomy race

The great Uber vs. Zoomy race

It’s ridesharing app versus ridesharing app as global juggernaut Uber and local upstart Zoomy go head to head. Which one is fastest, cheapest and easiest to use? Jihee Junn enlisted Don Rowe to help find out.

Going up against Uber is no easy feat. Just ask Lyft, which has long played second fiddle to Uber’s juggernaut status. It’s so big and ubiquitous that the word ‘Uber’ isn’t just a mere company name, but a verb in itself. Just like how you ‘Google’ a question or ‘Instagram’ your lunch, you ‘Uber’ wherever it is you need to go.

But despite Uber’s raging success globally, it’s also one of the most problematic companies ever to have emerged from Silicon Valley. From sexual assault claims to its “asshole” work culture, Uber has repeatedly been cited as the sharing economy at its toxic worst.

While New Zealand might not have Lyft, we do have Zoomy – a locally created ridesharing app started by two former telco execs back in 2012. Describing itself as “locally owned” with “lower rates” and “better service”, Zoomy, like Lyft, is at pains to position itself as the Angelic Good to Uber’s Big Bad. It pays its drivers more and its base rate is slightly cheaper, but its share of the ridesharing market is minimal. Uber still reigns supreme.

For many of us who want to support more ethical and locally owned businesses, riding an Uber can feel like somewhat of guilt-trip. But nine times out of 10, price and convenience trumps everything else, and Uber so far has been good at delivering both. But what’s to say Zoomy can’t do the same? We decided to put this to the test with a simple little experiment racing the two services across Auckland. We compare price, time and convenience, and find out what drivers really think about these two competing apps.

Don: A clean, comfortable Nissan. The driver didn’t want to talk, but he cranked a bit of reggaeton regardless. What’s with the rise of reggaeton lately? Anyway, he had on a pair of shades embossed with rhinestones, so an easy five stars.

Jihee: There’s a first for everything, and this was my first time in a Zoomy. Having spent the last two years enslaved to the convenience of Uber, I was surprised to find that the Zoomy app’s UI not only felt intuitive, but a lot less buggy than what I’d been led to believe by people who’d used the app a year or two ago.

Despite having to wait almost twice as long to get picked up in the middle of a busy two-way street, I’m finally whisked away in a Nissan Serena. Soon enough, I find out that my driver not only works for Zoomy but Uber as well. He tells me he started working for Zoomy way back in 2013 before Uber had even hit New Zealand shores. Eventually, he quit and set up his own shuttle service, but signed up to Uber when the service finally launched in 2014. Nowadays, he drives for both Uber and Zoomy but says pretty unhesitatingly that he prefers the latter since Uber takes a 20-25% commission whereas Zoomy takes just 15%.

“At the end of the day, I just want to make some money and go home early,” he says. Fair enough, five stars.

Don: My driver was a true blue Kiwi if ever I’ve yarned with one. He’d heard of Zoomy, being particularly interested in their share of the surge revenue, but had concerns about the company’s longevity and customer share.

“It’d be good to support a Kiwi company, but Uber has a lot of customers,” he says. “Something like 300,000 I heard. It’ll be interesting to see what happens, especially if Zoomy is here for the long haul.”

Five stars, but a warning for asking how many kids I had: I’m not that old.

Jihee: My Zoomy arrives not long afterwards. He offers me a treat size packet of peanut M&Ms within minutes of driving off, so we’re already off to a pretty good start.

As my insulin levels start to perk up as I munch away on a mouthful of chocolate in the backseat, the driver tells about how despite having only been in the job for about a month, he’s had a pretty positive experience so far. “Zoomy is going to get really big and I think it’ll take over Uber, but it’ll take time,” he says.

When I ask him when he’s scheduled to finish, he says he’ll probably finish around 12 or 1am having started earlier in the afternoon. He says 12 hour days are pretty common for him, but the choice to work that long is entirely up to him. “I can do five hours if I want, but I want the money,” he says, which is why he’s also scheduled to work over the Christmas period, lapping up all those lucrative customers drunkenly travelling from one end-of-year party to another.

Christmas is overrated anyway, so good on him for chasing that paper. Five stars.

Jihee: For once, my Zoomy is the first to arrive, rocking up to Eden Park in a pretty-in-mint Toyota Prius. I compliment him on the shade of his pastel green car and in no time,we’re dashing into bustling central traffic.

Like my first Zoomy encounter, my driver also splits his time between ridesharing services, having worked for the Zoomy for around six months and Uber for about a year. He also prefers Zoomy over Uber, citing the exact same reason – the larger percentage of the commission he’s entitled to.

Like my last driver, he’s also working a 12+ hour day, starting at 7am and scheduled to finish at 8pm. But if his speedy driving skills are anything to go by, he might just manage to make bank before then. Five stars.

Don: As the Zoomy boosted off, resplendent in powdered mint, I kicked rocks outside Eden Park. Heading down Dominion Road my driver was pipped by traffic, coming in at around a 9 minute pickup time.

My driver had considered Zoomy when he first started driving but said they required two days of training that he wasn’t prepared to do at the time. “But you’re the tenth person in three days to tell me to join Zoomy. I don’t have to do much to leave Uber, I just need to switch apps. And if a better option is there, why wouldn’t I do it?”

Jihee: Two times out of three, Uber was both faster and cheaper. But these victories were marginal, with mere minutes/cents separating the two. And while Zoomy’s sparser presence means it might not always be reliable outside of central Auckland, that’s an issue of exposure and market share – something we, as consumers, have the power to change.